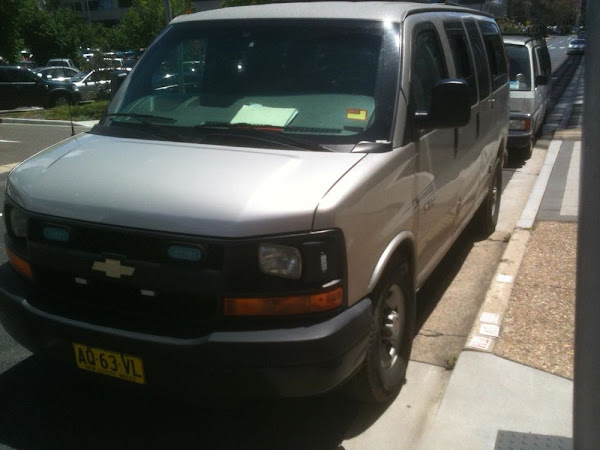 Below are some photos taken outside Alexander Building in Woden. The AFP use this from time to time for training, as seen before.

This time however, parked with the AFP vehicles was a Chevy Minivan. It looks like a Chevrolet Express.

Closer look showed that while it had standard NSW plates, it was left hand drive, and covered in the type of little LED strobes that unmarked police vehicles use.

In light of Obamababy’s planned visit, I suspect the AFP and their cousins from the states are doing some familiarisation training.

Seriously, if he wants a true Aussie experience, he should set out across the red centre a la Pricilla when travelling to Darwin. Drag make-up optional.

Really? But Flowers By Irene are just delivering flowers yes?

Really? But Flowers By Irene are just delivering flowers yes?

Just the only thing that Stretch Hummer guy could find.

Move along, nothing to see here…

I Bet It Has Something To Do With The Queanbeyan Show.

I Bet It Has Something To Do With The Queanbeyan Show.

You are a remarkably odd person.

and I saw a Chrysler Neon in the Woden Westfield carpark today, at the closest point possible to the Alexandria building. Did wonder why anyone would own a Neon.

I think neon drivers get to park in the disabled spots.

The US marines that are on permanent security at the US embassy have been using the Chev/GMC van’s for years. I think they might be LHD as well.

And the best place to park a Neon is the spot which will give the Tow truck driver the least hassle.

I’ve heard on semi-reliable authority that members of Obama’s adminstration are already in Canberra doing whatever pre-visit activities they usually do.

Probably checking out who does the best burgers in case he gets the midnight munchies or arranging a private pitching session out at the Cavalry’s home ground.

and I saw a Chrysler Neon in the Woden Westfield carpark today, at the closest point possible to the Alexandria building. Did wonder why anyone would own a Neon.

At least the Neon made a positive contribution to the motoring world: it provided the bottom end for BMW’s first MINI engines.

The US marines that are on permanent security at the US embassy have been using the Chev/GMC van’s for years. I think they might be LHD as well.

Someone I was chatting with last night was pretty sure this is one of the vans that belong to the Marines at the embassy.

Paula Simcocks - 3 hours ago
Looking back in times of war and crisis people loved the fun of live shows, music and drama. Lifts spirits, usually doesn’t... View
Lindy Edwards - 10 hours ago
Nanna was reciting Yeats as fires approached her place. And a he'll of a lot of people are going to be singing, drawing and w... View
Josie White - 15 hours ago
I think that the arts have a role to play in alleviating community anxiety and providing some relief from the stresses and to... View
Opinion 14

Julie Maynard - 5 hours ago
Tania Shaw I’m going buy what I owe compared to my friends. Yes, I did add up the cost you mentioned and I’m still ahead-... View
Stuart Herring - 9 hours ago
A mortgage is almost guaranteed to be cheaper than renting the equivalent property - after the first couple of years. Because... View
Gill McGill - 9 hours ago
Corey Karl yep! And pay for other people. 🤷‍♀️ View
Community 22

@The_RiotACT @The_RiotACT
Good news for Canberra cricket fans with the ACT Meteors heading into a streak of four home matches https://t.co/E2C3ZnO8Us (4 hours ago)