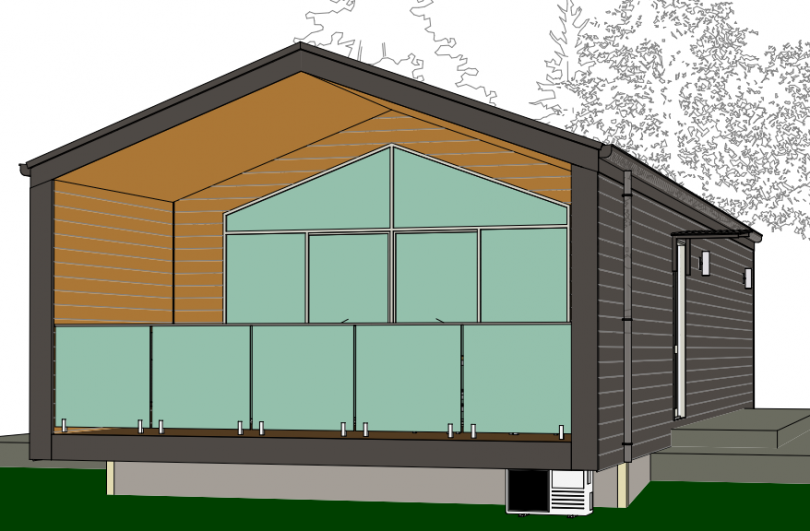 An artist’s impression of the new villa. Images: Purdon Planning.

The Alivio Tourist Park in O’Connor, which has been transformed in recent years by a multi-million upgrade, will continue its evolution with plans to pull down its Boronia Motel and replace it with villas.

Well known for its inner city bushland location, the park changed its name in 2013 after an $8 million upgrade, and has since added new garden villas, new amenities block, a camp kitchen, play and barbecue areas and, last year, a waterplay space.

The 2011 Master Plan had included the demolition of the Boronia Motel and the construction of the villas but was left out of the original development application.

The 10-unit Boronia is at the south of the block, fronting Kunzea Street, next to the administration block.

The development application prepared by Purdon Planning says the amenities block between the motel’s two sections will be retained. Four villas will be located west of the administration building and three to the east. 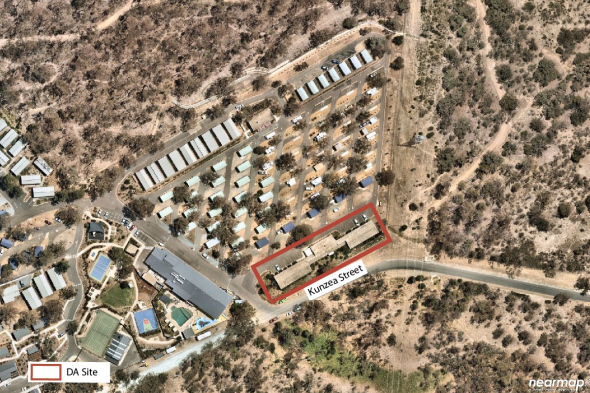 Location on Kunzea Street of the proposed redevelopment.

The two-bedroom villas will each contain a kitchen, living area and veranda overlooking the adjacent bushland beyond Kunzea Street.

Landscaping at the rear of the units will be remediated or maintained if and where appropriate. The front and back of the villas will be built with a timber-look cladding, while the sides will be a grey-painted cladding.

The existing concrete slabbing will be maintained to reduce excavation and demolition work, and the 13 car parking spaces in front of the Boronia Motel will remain to service the new Boronia Villas.

The proposed redevelopment will mean a net increase of 30 square metres in gross floor area.

No trees will be removed as a part of the demolition or redevelopment works.

The DA says the $695,000 proposal will mean an improved view from Kunzea Street and better sightlines from the park through to the Nature Reserve.

As well as cabin, villa and caravan site accommodation, Alivio offers a range of facilities including outdoor and indoor recreational activities such as a swimming pool, basketball courts and table tennis, as well as a small shop, barbecues, laundry facilities and a café and bar.

Matthew Soall - 22 minutes ago
Maybe ANU should be more focused on teaching students then running the place like a business. View
Capital Retro - 1 hour ago
The alarm bells are ringing now: https://www.abc.net.au/news/2021-04-23/anu-unveils-162-million-budget-deficit-due-to-covid-1... View
David Hennessy - 1 hour ago
Can’t imagine this ending other than positive View
Opinion 63

Peter Brierley - 24 minutes ago
If I have to follow ALL the rules to drive my car (on the road) then why are these SAME rules not applied to ALL other road u... View
nerdfrenzy - 1 hour ago
I use a scooter to commute to and from work everyday. I'm always aware of people sharing the bike paths that I use. I do find... View
Jaeme Ogilvie - 1 hour ago
Escooter owners are not a problem as rule, I think its super important they are not grouped in here. Unfortunately there seem... View
News 5

saphael7 - 40 minutes ago
Does this mean that domestic violence is going to be brought to the park frequented by small children? View
Community 1

Esmeralda - 56 minutes ago
You're asking the wrong questions. The idea that you have to take from the poor to give to the poor is outdated and just wron... View
Food & Wine 49

Naoko Lamb - 3 hours ago
Very tasty soup, noodle and chashu. The service was quick and friendly and the atmosphere of the shop was vibrant and welcomi... View
News 4

Brisal - 3 hours ago
Then you stop and fix it. It isn't difficult. View
News 15

Neville Mercer - 3 hours ago
Wasnt the Center cinema part of the Academy Twin Cinema group at Paddington? View
Shayne Borger - 13 hours ago
Jorge Gatica na just someone who doesnt appreciate architecture or heritage....probably a developer who like the council want... View
Lifestyle 28

Darron Marks - 5 hours ago
Yeah we are still waiting for the cinema in Gungahlin as well. Covid is the reason supposedly hasn't stopped construction on... View
News 26

chewy14 - 14 hours ago
Capital Retro, Except all evidence at present is to the contrary. The only large scale batteries connected to the grid are ma... View
Opinion 8

Brian Evans - 15 hours ago
I live in an Enrico house and it is, day to day a wonderful experience. View
show more show less
*Results are based on activity within last 7 days

To many, she is known as 'Mumma Mary', the queen of the road, or even the truck driving instructor in...
Opinion 85

The company behind a proposal to construct and develop a new hard rock quarry near Royalla has made its intentions...
Courts & Crime 0

Builders in the ACT are struggling to get materials to complete jobs, with construction grinding to a halt in what...

@The_RiotACT @The_RiotACT
The Gang Gang Café may be tucked away at #Downer shops, but its musician owners are making a splash https://t.co/RRXY5ACYgx (10 minutes ago)

@The_RiotACT @The_RiotACT
Can you help police identify this man? He was taken to hospital by ambulance from the Gungahlin Town Centre on 30 March 2021 and says his name is 'Roger' https://t.co/eaRqBkQco8 (1 hour ago)

@The_RiotACT @The_RiotACT
#Bombala locals will have to travel hours to see a doctor when their only medical practice closes https://t.co/DCTDLXCyuh (1 hour ago)