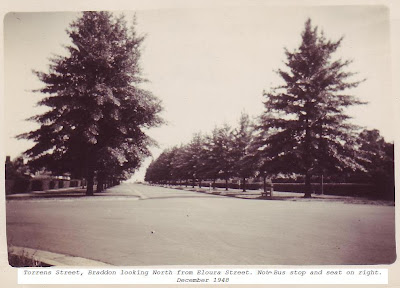 This is the tenth part of a series of photographs taken by RiotACT reader Old Canberran on his Kodak Box Brownie from 1948.

Here’s a couple of photos of Torrens Street, Braddon. One is looking North from Eloura Street which was taken in 1948 and the other is looking South from about the same place a few years later. In the full sized version you can just make out the old Parliament House in the distance.

The other one looking North, shows how each house had a front hedge in those days and the Parks and Gardens people used to water and mow the nature strips and keep the gutters swept and clean from debris. They also pruned the Canadian Pin Oaks when needed. The trees made this street one of the prettiest in Canberra in those days with the various colours of the leaves in Autumn. Torrens Street had a mix of Government and Privately built homes and the East side of the street nearest to Civic bordered Northbourne Oval. 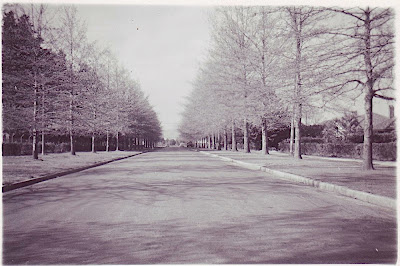 And here’s the current view south:

Love the old photos. Keep it up, Old Canberran, much appreciated

Nice photos. Johnboy is 100% correct though. Canberra is the capital city of Australia, so you have to expect to live under city conditions. Don’t like it, move to Braidwood. Canberra still has a long long long way to go in the way of growth and density.

you can actually still leave your doors unlocked – if the the scrotes are going to want to get in they will anyway, in my experience, so the carefree look makes it feel like someone is in, or about to be, and makes good protection. innit.

The sweeping gutters reminds me of when living in Berlin.

The old grandma’s would always sweep the stairwells, even though cleaners came once a week to do it.

Don’t get me wrong JB. The Canberra you now know will probably feel the same to you in 20 or 30 years time as mine does to me.
The City has come of age and now has most of the problems that other cities have but it also has a lot of the benefits that go with it such as entertainments venues, restaurants, universities and high density living etc. Some like it, some don’t and those that don’t have the choice to stay or move. I moved but I enjoyed it at the time.
Thanks for the Google shots as well. Interesting comparison.

So move to the sleepy hick town of your memory.

Plenty of them out there.

don’t worry, the thought is already out there – small town in vic is looking really good. or the one in qld, on the coast. decisions, decisions.

So move to the sleepy hick town of your memory.

Plenty of them out there.

I miss the ability to leave the doors unlocked when you popped down to the shop, getting a greeting from strangers in the street as you walked past, and the carefree nature of life in my childhood.

far too busy and hectic now. sometimes, i want to just have canberra as it was, no new suburbs, sprinklers every day for the kids to run through in summer…

A lot of us are quite fond of life now too.

The trees, Canadian Pinoaks, were planted in the mid 20’s which makes them nearly 90 years old. Definitely not fast growing. They must have been severely pruned and lopped at some stage as I remember when we left Canberra in 1988 they were nearly touching in the middle of the street.
I lived in Torrens Street with my parents for the first 25 years of my life and the house we lived in was occupied temporarily by Dr John James while he built his own place at 23 Torrens St. His house was on the left corner across the cross street in pic no 3. At one stage we had a doctor on one corner, a dentist on the opposite corner and a chemist 3 doors down the street from us.
It was a very busy street being the main artery from Civic to Ainslie and the other Northern suburbs of Dickson, Downer and Watson and Hackett. Our guvvy house was built in the mid 20’s and my parents took up residence in 1933. It was handy to everything and we could walk to Civic, my school, the picture theatre etc. Our milk, bread and ice was delivered by horse and cart every day and the horses were so used to it that they stopped at the same places on the way around their route. While the baker was busy delivering I used to climb in the back door of his vehicle and eat the crumbs which fell off the black topped loaves.
It was a great place to live back in the 60’s and 70’s. We brought up 3 kids when we lived in Watson and they lacked nothing in terms of schooling and they all went to public schools. Sport was a big thing in those days and drugs were virtually unheard of, as was binge drinking. Kids talked to each other face to face as mobile phones hadn’t been invented then. Life was good.

Gee this street looked really lovely then. It’s the Canberra I remember. Makes you realise that things have changed for the worse in a lot of ways.

I’m with mirage3, love these pictures every time. Thanks much, really

Just love the pictures of Canberra from long ago. Thanks.

They must have been pretty fast growing trees. Do you know when they would have been planted?

Wow, those trees were big even then. Thanks again for sharing 🙂

JS9 - 32 minutes ago
Not many decisions of the planning authority deserve endorsement, but ignoring the NIMBYism on this one does. it is absolutel... View
Opinion 1

Heavs - 33 minutes ago
This just in - Government is not responsible for handling advertising and marketing for private developer. More news at 6.... View
News 2

A_Cog - 11 hours ago
Should the ACT get its own police force? NO! It'd be run just as badly as every other ACT Govt service. Instead of buying ser... View
News 18

wildturkeycanoe - 12 hours ago
I'm still waiting for surgery, almost up to my "expected" 365 days on the Category 3 list. This is after initially waiting fo... View
HiddenDragon - 15 hours ago
This year's Annual Rates Assessment Notices tell ratepayers that 31% of rates payments go towards funding the health system -... View
Opinion 110

chewy14 - 13 hours ago
Russianafroman, I go from being called a right wing nut job to a Socialist Comrade in the space of a few stories these days.... View
russianafroman - 16 hours ago
Capital Retro I don't watch or listen to the ABC. But it wouldn't surprise me. View
Jose Black - 1 day ago
The ACT Greens have a major policy on supporting the community sector (including youth and mental health services) and giving... View
ACT Election 115

Reno Minopoli - 15 hours ago
Clinton Berry which part of "Three decades’ population growth "needed" do you not understand? Kids that grow up replace tho... View
Capital Retro - 16 hours ago
Well, I can't speak for everyone but I have certainly always "paid my own way". In the early days of SMSFs the deductibility... View
ssek - 16 hours ago
The greens and pretty good economic plan are an oxymoron. View
Property 1

@The_RiotACT @The_RiotACT
Verity Ln Markets is meant to put Canberra on the global culinary map, but Zoya Patel isn't convinced. Is this another example of trying to shoehorn Canberra into some vision of a city that is isn't? https://t.co/uQA6HUAJZg (2 hours ago)