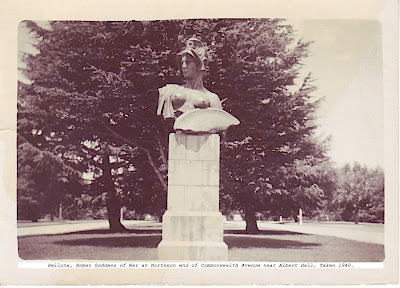 This is the sixth part of a series of photographs taken by RiotACT reader Old Canberran on his Kodak Box Brownie in 1948.

Attached is a pic of Bellona the Roman Goddess of war. She’s been in a few spots over the years [Pictured here near the Albert Hall]. I think she spent some time in the National Gallery and now resides at the War Memorial. I may be wrong about that.

What I do remember is the fun the Uni students used to have on graduation day when they would dress her up in a bra and lipstick and all sorts of weird gear.

I never did find out why she even appears in Canberra. One of natures mysteries, I’m afraid. 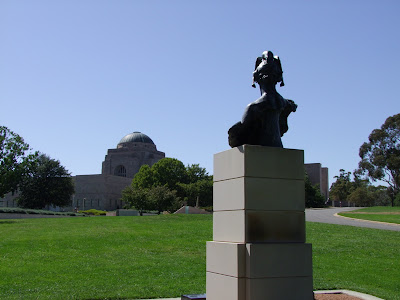 UPDATE: I’ve just popped down to the War Memorial and quickly found her stuck in with a plaque for Lone Pine and a replica plaque from Anzac Cove.

Apparently she was a gift of the British Government in 1920. The plaque says her name is just “War”. As any fule kno Bellona was the original Roman goddess of war.

A couple more modern pictures below. 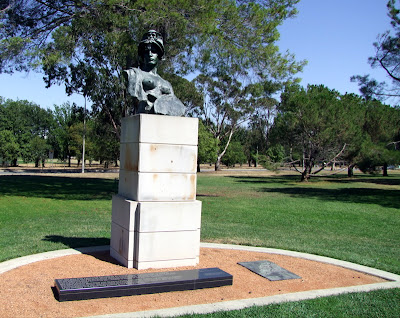 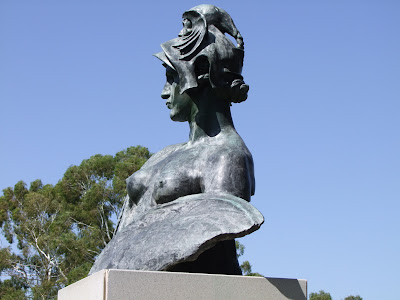 Hadn’t picked you as a fellow Molesworth fan, Johnboy

She’s a bit incongruous anywhere, which is probably why she keeps having to couch surf. Her friends are all like, “What are we going to do about the Bellona problem?”

Interesting. I remember her (rather incongruously I thought) at the Albert Hall, I didn’t realise she’d moved around that much.

Hadn’t picked you as a fellow Molesworth fan, Johnboy

She certainly looks a lot safer where she now is. Tks for the pics JB and all the links p1. Her location in my photo was at the start of the split in Commonwealth Avenue. You used to come off the old Commonwealth Bridge heading South into an “S” bend which took you into the left lane. The right lane heading North went in a straight line onto the old bridge which was only 2 lanes, one each way. Poor old Bellona had some very near misses when cars had trouble negotiating the “S” bend at speed.

Yeah, thanks Old Canberran. I really enjoy these old photos, comparing the them to the modern Canberra. I enjoy it even more when we are invited to guess the location portrayed in an old 1948 snapshot.

Now, someone should post shots of The Private Bin.

From the wikipedia article:

‘Politically, all Senate meetings relating to foreign war were conducted in the Templum Bellonae (Temple of Bellona)….’

I wonder if they had plans for world domination!

Heck, I didn’t even know there was a goddess of war! I thought that Mars dude had the gig sewn up ….

Anyhow, she looks kind of lonely out there. I had seen the plaque about her outside of Albert Hall and wondered about the story. An odd purchasing decision indeed! You’d think they’d be wanting some goddess of peace or prosperity, but maybe war was more appropriate given the political nature of the city.

Another great bit of Canberra history I did not know, thanks Old Canberran.

For all of you public art fans on RA, this was Canberra’s first piece, according to the NAA.

Apparently it IS now at the AWM, in the Sculpture Garden.

SP Brogues - 45 minutes ago
All that landfill View
Vickie Saunders - 12 hours ago
Not seeing a face makes one confused. Clarity pays off. View
Lorraine Marsh - 13 hours ago
Fed up seeing them all over canberra. One will do.... View
ACT Election 27