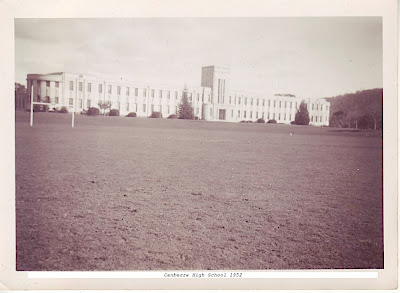 This is the ninth part of a series of photographs taken by RiotACT reader Old Canberran on his Kodak Box Brownie from 1948.

Canberra High School was one school I didn’t attend but I know in 1954 I was in the footy team that stopped their unbroken run of wins. It was the only high school on the north side for many years and Telopea was the only public high on the South side.

These days it’s the School of Art in the ANU.

old canberran always looking foward to your little expo’s. By the way I have a
six-20 model C
six-20 model D (with flash attachments)
No. 2A model C me thinks US market only
AK8 Hanimex hand held wind up movie camera (I know not a Brownie but still interesting).

Great photo of a lovely building.

Frank Hurley took a nice selection of shots of this building in the late-1930s which can be found on the National Library website.

I love those old cameras. And I’m so enjoying your photos Old Canberran.
One of my relatives attended Canberra High at the time it moved to Belconnen.

Unfortunately I don’t have it any more. We have moved house 5 times in the past 20 years and we have lightened our load each time we moved. Our old cameras were donated to the Canberra Photographic Society when we left Canberra as my wife was a member and a good amateur photographer.
There have been a lot of Box Brownies and mine was a 620C which has a close-up portrait slide over the lens. I found a photo on the net of one the same:-

They were an amazing bit of gear with a fixed lens which had a huge depth of field. The shutter was also fixed at an optimum speed which I think was 1/60th of a second. The film was on a roll and had 12 exposures in black and white. The prints are 2.25 by 3.25 inches and even after 60 years they have not faded as you can see from the scanned copies here.

Could we please see your Kodak Box Brownie that you used to take these pictures (if it still exists)? I know one can find a picture of it on the internet (such as Wikipedia) but just want to see what yours looks like.

I was a member of Old Canberrans when we wore cotton hockey socks!

Couldn’t pick it till I read the blurb. The space around the building really changes its dynamics for me.

Ricci, it was partly due to the hockey club name that made me decide on my user name. I used to play for St Pats and I had some good friends in the Old Canberrans club. Coincidentally I used to ride my bike from Braddon to the Boys Grammar 5 days a week. Winter was the worst time as I used to get chillblains on my ears. Kept me fit though.

Thanks for the photos Old Canberran (I used to be in the hockey club called that). Canberra High stopped being a selective high school soon after I started there. Maybe there was a connection. That would mean the selective system finished in the late 1950’s.

Going to Canberra High meant riding a pushbike each school day from Red Hill, opposite the Boys Grammar School, in rain, sun, frost or snow. I could have walked to Telopea Park School as I did in Primary School! My younger brothers and sister went to Telopea. We all completed university education and the different schools we went to did not seem to affect our relative performances. If anything my siblings did better than me.

In the olden days, when these were the only two high schools in Canberra, primary schools tended to stream students into one or the other. The kids who seemed likely to go to uni, or were literate, went to Canberra High, and the ones the teachers reckoned would go into trades or some other manual field went to Telopea.

I’m not sure at what point that changed mind you, and this might have been a bit earlier than the mid 50s.

That pretty much sums it up, Ant, and that’s what led to the Canberra High kids getting a reputation for being up themselves. There were, of course other secondary schools such as St Christophers, the girls and boys Grammar Schools and Queanbeyan High. St Eddies came along in 1954 but it wasn’t until the NCDC started in 1957 that schools started appearing in the burbs.

The planners rule of thumb was that each suburb had a primary school and every four suburbs had a high school. As the suburbs aged of course, the primary schools closed and became something else. Then the same thing happened to the high schools. Dickson, Downer, Hackett and Watson are classic examples of this evolution. Nowadays those suburbs are probably regenerating with younger families living there once again.

Thanks for the comments about my pics, by the way. Unfortunately I only have a few left of that era.

These photos are a real highlight – thanks for posting them up!

These photos are a real highlight – thanks for posting them up!

JB keeps using the official embed code provided for this purpose. Picassa seems to be having a brain fade right now.

Jb keeps leaving the ?feat=embedwebsite on his link.
Try http://picasaweb.google.com/lh/photo/mV5xA3hMN_p8Z9q_rCkKAw

The link to the bigger picture doesn’t work for me 🙁

Nice photo though, thanks again.

It rules… If only Canberra was more like Rapture.

Nothing wrong with art deco…

Robyn Holder - 34 minutes ago
Steve Wood and there you go with the rightwing thinking of how to disenfranchise people. Congratulations. View
Robyn Holder - 35 minutes ago
Phillip Business Community you are there to make money out if people. You don't care who lives or dies or is maimed for life.... View
ACT Election 71

Julie Macklin - 49 minutes ago
Colin Vivian, The bridge replacement was a suggestion from the Federal government, not local. Now it's not to be replaced, bu... View
Colin Vivian - 1 hour ago
Peter Mackay if they’re smart they could look at Trackless Trams at 1/5 the cost. No need for ridiculous bridge replacement... View
William Mudford - 2 hours ago
The Liberals announced the other day that they would fund their promises by encouraging people to “move back from Queanbeya... View
Property 14

Julian Valtas - 49 minutes ago
chain ourselves to it maybe? View
Nathan James - 54 minutes ago
Wonder how Julian Valtas feels about this View
Andrew Campbell - 1 hour ago
Ryan - they are gonna bulldoze Mings.. View
Food & Wine 24

Shaun Claypole - 2 hours ago
Jessica Botterill I just saw this We are in... View
Kirsty Ross - 14 hours ago
Champers Grant I am not sure but in the article it says that he will only be there until January View
Champers Grant - 20 hours ago
Kirsty Ross where is he going? View
ACT Election 58

Juanita Dawson - 10 hours ago
Interesting. Is it all music or just music a person liked at some stage in their life? View
Community 11

Vickie Saunders - 11 hours ago
Not seeing a face makes one confused. Clarity pays off. View
Lorraine Marsh - 11 hours ago
Fed up seeing them all over canberra. One will do.... View
News 56

Marcel Bond - 15 hours ago
The ACT Legislative Assembly has an opposition party? Really? I vaguely recall hearing from them for about 3 weeks, 4 years a... View
show more show less
*Results are based on activity within last 7 days

@The_RiotACT @The_RiotACT
Looking to escape to the sun? Canberrans will next month be able to fly direct to the Sunshine Coast and Cairns. And check out the prices https://t.co/ihVovf3wqi (1 hour ago)

@The_RiotACT @The_RiotACT
On The Campaign Trail today, opposition to free food for school kids gets Berry fired up and Coe quizzed for questioning the cost of COVID closures https://t.co/j7gbc1zkWM (2 hours ago)