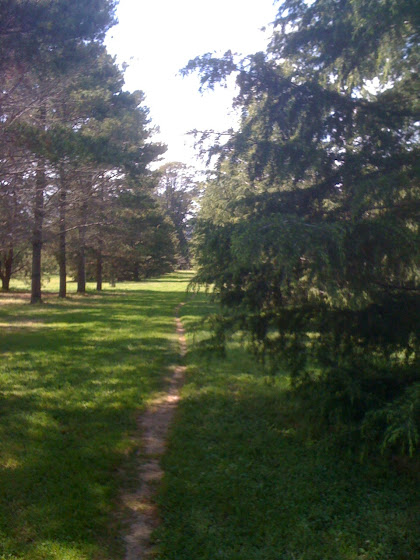 Haig Park, for those who don’t know it, is the belt of trees just to the North of Civic. It spans the distance between the feet of Black Mountain and Mount Ainslie.

Some people don’t think much of it, but I think their problem is approaching it in the wrong direction.

If you try and cross it North-South it’s a short and disappointing experience.

But if you get to the middle of it and start tramping East-West it’s a very different beast indeed.

In the centre of the regimented rows of pine trees it becomes a magical place. It feels like it goes on forever. Periodically you might have to cross a road, but those brief re-emergences into city life only serve to highlight the otherness.

Haig Park was planted in 1921 by Charles Weston as a wind-break when the Inner North was as dusty and wind-blown as Gungahlin is now.

Field Marshall Haig has been painted by revisionist history as a reviled butcher. But he was held in such esteem immediately after the first world war that this immense park was named after him.

The TAMS page on the park has this to say:

Haig Park is a plantation of densely planted predominantly exotic trees on the northern edge of the Civic Centre. It’s strongly formal design consisting of trees planted in parallel rows renders it unique in Australian park design and this has led to classification by the National Trust. It is a very accessible forested park for a range of recreational pursuits.

In this spring weather I highly recommend going for a wander, just make sure you tackle it from the right direction.

24 Responses to On Haig Park
Filter
Showing only Website comments

It’s actually quite a lovely park with its rows of symmetrically planted trees, a natural partition amongst the suburban expanse. If only the garden city approach to town planning was in vouge in the early 19th century, perhaps other Australian capital cities would have benefited from pockets of manicured nature that we Canberrans take for granted…

When I went to Merici they always used to tell us not to walk through there cause of the junkies etc. and I did find it kinda dodgy whenever I walked through there on the way to civic.

That’s a lot more picaresque than the heterosexual beat was in the 1980s: behind the dumpsters in the alley near the Private Bin.

‘Picaresque: characteristic of a form of Spanish fiction, in which the adventures of an engagingly roguish hero are described in a series of usually humorous or satiric episodes that often depict, in realistic detail, the everyday life of the common people.’

That’s a lot more picaresque than the heterosexual beat was in the 1980s: behind the dumpsters in the alley near the Private Bin.

…so the range of recreational pursuits has become a little narrower…

I remember the gay beat there in the 1980s. Although the epicentre was the now demolished toilet block, you could pick up a guy almost anywhere in the park late at night. I remember one morning at 1:30AM on the way back from a business trip in Sydney I hooked up with a big guy with longish hair and we went for broke under one of the spreading pine trees. Unfortunately the toilet block was replaced by one of those electronic monsters and the stormwater channel was filled in sometime in the early 1990s and the guys moved on. Pity about that.

It also has one of the best climbing trees in Canberra. Unusually, you can get right up and touch the crown of the tree. Nice view, too.

yes it is a nice (long) spot. I did a little photo essay.

Does it work as a wind-break? If yes, I wonder why more of these haven’t been built around town.

…. as dusty and wind-blown as Gungahlin is now.

Exactly, that’s why I love the inner north. If I wanted to ride my bike in a treeless, soulless plain .. I’d move to Sydney.

Haig Park’s a local treasure. Bulldoze the slums, not the trees, to solve any security problems.

It was much more majestic before they cut down the 30 year old pine trees.

Eerie Kath? Jeez it doesn’t take much to spook you. In some parts it reminds me of European pine forests. Very nice.

It’s a nice walk on crisp winter mornings when there is a slight fog in the air and frost on the ground.

It’s a nice spot for a wedding, too, if you want something slightly eerie. I went to one early this year where they used the natural aisle of the trees to walk up.

I walk through the park every work day, usually coming home after 9pm, I can’t say I find it “ropey” after dark. Although I guess it depends on which part of the park you are going through.

I remember visiting them as a boy with my billy cart to gather the pine cones for the fire (at home). Mmmm that would have to have been in the 1950’s.

On the bike, the wind picks up noticeably as soon as one rides out of the inner north, and blusters unrelentingly along the barren, treeless expanse of Gungahlin Drive. In comparison, Haig Park is like a cool and calm oasis. Some parks like this in Gungahlin, with proper trees (not the fashionable scraggly, slow-growing natives with poor shade coverage and no apparent cooling effect), would really improve the future environment.

The new suburbs have an excuse for having no trees (they’re new!), but tree coverage in Gungahlin will always be patchy, thanks to tacky people purposely removing street trees from their lots to give passersby a better view of their magnificently inspired premises. The inner suburbs environs should be cherished.

Being non magical and a bit ropey after dark and having fungi it is about time it was reclassified residential, my estimate you could get 10000 units in there, big bucks for the government. We wouldn’t have to pay rates for a decade!

Matt Fallon - 1 hour ago
weekend breakfast Samantha Harding View
Moira Campbell - 5 hours ago
Nicole Fitzgerald this is the place I was telling you about! View
Joanne Trounce - 5 hours ago
Shannon Lee will make sure we do it!🥗🥗 View
News 5

@The_RiotACT @The_RiotACT
The first Canberra Street Dance Festival is set to celebrate all the elements of hip hop culture including dance, music, art & fashion this Saturday https://t.co/aJNfRCcQBK (51 minutes ago)