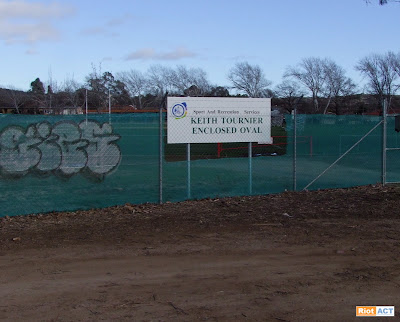 I’ve walked in a little late to the great power station imbroglio. But I believe I have a solution to the problem.

We should build the gas fired power station on Ainslie’s Keith Tournier oval.

No wait, bear with me here.

First on the subject of dirty power…

The more vocal critics are opposing building a power station on the grounds that it is “Dirty Power”.

Dirty as opposed to their theoretical moonbeam power generator, which runs on pixie dust and warm happy feelings, sure.

But dirtier than power from a brown coal station in the LaTrobe valley which then suffers huge transmission losses on the wire to us?

Or from a hydro plant? Which valley full of fluffy animals would you like to flood to get more of that?

You already have to option to buy green power credits for hypothetical renewable energy 24/7.

But for the rest of the population a local gas-fired power station positively glows green compared to a rational assessment of the alternatives.

“Oh but the pollutants” they twitter, while expecting that a transport system driven by tens of thousands of small inefficient petrol and diesel engines be rolled to their doorstops.

There are health standards, they can be adhered to.

Now a sneaky Government would have backed us into this. Starting with some reports warning of dire consequences unless we sorted out some power generation. Follow it up by sending Gavin down in the truck to turn off the lights in selected suburbs every few nights.

They’d have kept it going until the frightened burghers were positively begging for power stations.

Instead they just announced they were doing it and told the relevant bed-wetters to stuff it. Which might have worked if they hadn’t already taken this approach on so very many issues that pretty much everyone in Canberra is still smarting from the last dose they personally received.

So now it’s a problem.

Given that real environmentalists would support a local gas-fired power station we now need to find a location that can man up and take one for the team.

Where better than Ainslie?

The marvelous Goodwin aged care facility is nearing completion (without, as it happens, irrevocable damage to the social and environmental fabric of Canberra’s most precious suburb).

Right across the road we have the Keith Tournier oval.

Normally Ainslie-ites would be threatening to chain themselves to the hallowed turf in protest. (Note: not actually doing it)

But recently the oval has been converted to the use of Rugby League.

And with the site pretty much surrounded by an age care facility no concerns about long term health impacts.

You know it makes sense.

11 Responses to On Power Stations
Filter
Showing only Website comments

BTW, NEMMCO records transmission and distribution losses and they are typical 5-8%.

…or you could get serious about at-source demand reduction in business, govt and households; change the pricing structure of the electricity market to encourage customers to consume less; invest heavily in wind turbines (aren’t the ridgelines of the Brindabella’s perfect for wind?), geothermal power in the Hunter and Cooper Basin, solar thermal adjuncts to existing goal and gas-fired powerplants and increase the uptake of solar PV (especially with the new, cheaper “printed” solar panels soon to be on the market) ; tighten building regulations and planning laws to force developers to plan their suburbs and houses with energy consumption over the life of the home in mind; etc.

Building a gas-fired pp in Ainslie is hardly a long-term solution to a the root cause of the problem, which is overconsumption.

Gold star for that one WM-C.

Wasn’t she in Neighbours?

Don’t build it at Ainslie, build it at Spring Range. As long as it doesn’t create flutter, make whirring noises and scare the sheep the SRLG should be happy to accommodate it.

Not KT oval. He was a legend

You can make it the KT/Johnboy power station, much cooler than an oval even if he does have to share with me now.

what exactly were you trying to acheive with this post?

Not KT oval. He was a legend.

Put it on Reid Oval which nobody would miss! The gentle warmth emitted from the powerstation would then have a secondary purpose of keeping everyone warm at the Dawn Service.

You know it makes sense.

caf: i’d prefer that to “bare with me here”

Sounds good – and I both live in Ainslie and, during a few years of youthful indiscretion, have committed Rugby League.

“No wait, bear with me here.” is becoming your catchphrase.

Or from a hydro plant? Which valley full of fluffy animals would you like to flood to get more of that?

Deborah Gale - 3 minutes ago
Geocon buildings that are inappropriate and unsympathetic to the area? How unusual. Let’s not be surprised when this is app... View
Marc Edwards - 30 minutes ago
Shouldn’t be any than three stories and to remain sympathetic to the area, something sadly Geocon hasn’t ever been able t... View
Daniel Duncan - 2 hours ago
Another ugly building with no soul.. with no clue on traffic flow. View
News 6

Stefan Stirzaker - 5 minutes ago
Good to see the white-anting after the fact in a bid to reduce the amazingly good job done by the upper leadership and member... View
HiddenDragon - 53 minutes ago
The politics and the personalities are ultimately secondary issues - with increasingly nasty summers on the way, we need to d... View
Tina Newsome - 1 hour ago
I think they all did a bloody amazing job out there! View
News 15

Tiffany Roy - 6 minutes ago
Canberra hospital's mental health ward is awful. View
Gary Hatcliffe - 34 minutes ago
Wow! 8 beds. Aren't we lucky.... View
Jarrod Male - 56 minutes ago
Bianca Rossetti ....let's hope. My understanding was that it has been on the table for over 10 years now. The legislation aro... View
Business 3

Ian Fraser - 3 hours ago
Sure Elizabeth, but be wary of coastal ones which won't like clay soil or frosts. And be aware that the local Silver Banksia... View
Property 28

The ACT Government has called on Opposition police and emergency services spokesperson Guilia Jones to quit the portfolio after it...
Best of Canberra 58

Building a new home, or renovating or extending your existing home, is one of the biggest investments you’ll ever make,...
Best of Canberra 160

For many, the thought of visiting the dentist can come with a wave of anxiety. But even when you do...
News 40

Major sport is about to resume in Australia in front of empty stadiums. Do we need cardboard cut-outs of fans...
Sport 14

@The_RiotACT @The_RiotACT
White Chaco, with its fresh Taiwanese, Japanese & Chinese fusion food, is a Braddon gem worth seeking out https://t.co/R7NyKgBCqZ (26 minutes ago)

@The_RiotACT @The_RiotACT
A former ACT firefighter says "totally ill informed claims" in local media about how the Orroral Valley fire was fought are hurtful and damaging. Leaked documents allege there was decision making paralysis during the crisis https://t.co/EivYwLDPmr (2 hours ago)

@The_RiotACT @The_RiotACT
A Geocon proposal for an eight-storey mixed-use development in Kingston is out of step with the character of the area and raises serious traffic and parking concerns, according to the local residents group https://t.co/wYEviKMLOD (3 hours ago)