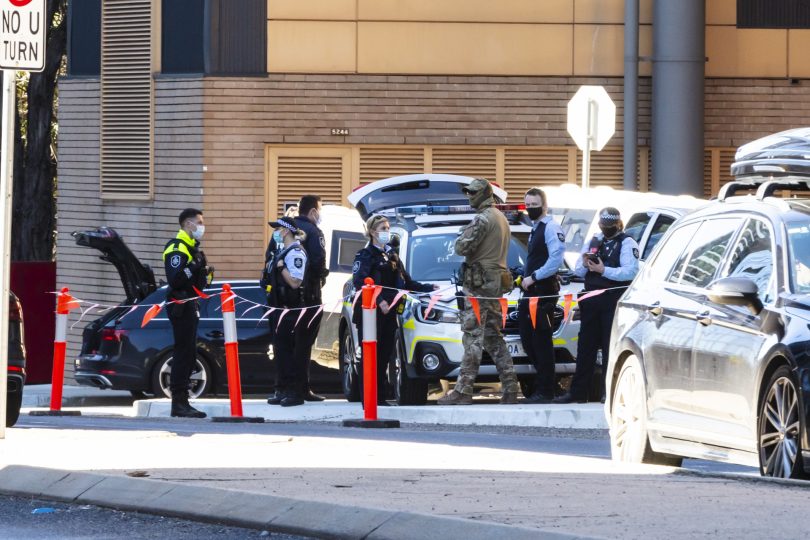 Law enforcement at the scene of the Belconnen shooting this morning. Photo: Thomas Lucraft.

UPDATED 3:00 pm: Investigations are continuing into a shooting in the car park of the Abode Hotel in Belconnen after police failed to find the shooter despite an extensive search of the area.

A 56-year-old man was found with a single gunshot wound to the leg after police were called to the scene at around 9:30 am this morning.

ACT Policing said detectives from the ACT Criminal Investigations Team are “following a number of lines of enquiry”.

Anyone with information about this incident should contact Crime Stoppers on 1800 333 000, or via the Crime Stoppers ACT website, and quote the reference number P2008295.

UPDATED 11:10 am: ACT Policing has confirmed that officers were called to the Abode Hotel in Belconnen at about 9:30 am this morning (18 August) and that one man had been shot in the leg.

Police remain at the scene of the incident and investigations are continuing. No arrests have been made.

The public is being asked to avoid the area near Chandler Street in Belconnen.

Anyone with any information that could assist police is urged to contact Crime Stoppers on 1800 333 000 or www.crimestoppers.com.au.

10:50 am: The Emergency Services Agency has confirmed that paramedics have transported one man to hospital in a stable condition after a shooting at Belconnen this morning. 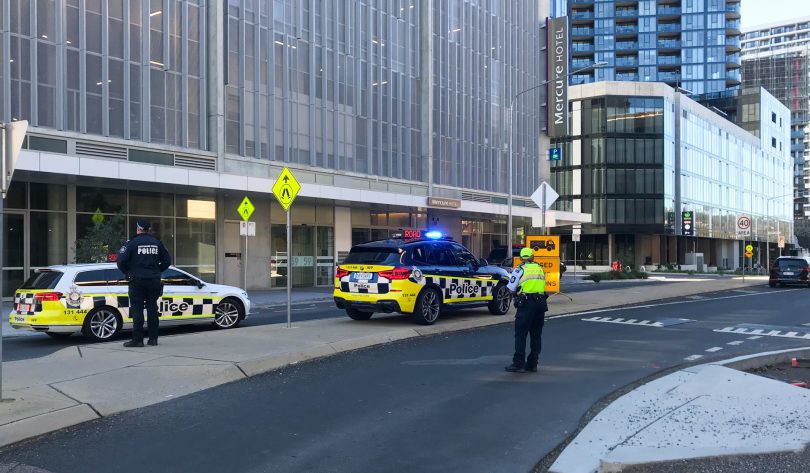 Police are on the scene after a shooting in Belconnen. Photo: Thomas Lucraft.

10:30 am: One man has been injured in a shooting at the Abode Hotel in Belconnen this morning (18 August).

Police are on the scene but the man’s condition is not yet known.

ACT Policing has confirmed that no arrests have been made.