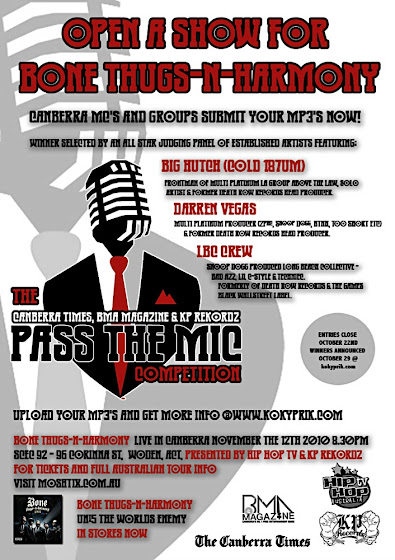 We are giving one lucky Canberra MC or group the once in a lifetime opportunity to open a show for Grammy Award winning hip hop legends Bone Thugs-N-Harmony live in Canberra!

Plus as a bonus the winning act will get free entry to the after party of the year!

Help us find the best hip hop talent Canberra has to offer.

Spread the word to anyone you know that might be interested…It could be the the kick start thier music career needs.

I feel bad that someone as internationally recognised as Bone Thugs will be playing at the Labor Club.

Well they arent actually playing at the Labor Club its at Southern Cross Club Woden in the new events centre.

That still may sound like a strange choice of venue but believe me its perfect for the show.
They can hold 1200…They have a brand new kick ass sound system going in just before this show..they have screens either end of the stage streaming the show live and everything is new as the joint was only finished up a bit over a year ago.

No need to feel bad for Bone.
They are being paid to perform and were actually spending quite a bit extra to make sure they enjoy thier stay in the Capital.

If you like hip hop then get behind the show because if we can make a success of it we plan to bring a lot of big name acts to Canberra over the next couple of years.

Can I get up and cut sick on my kazoo?

Can you play cross roads?

I feel bad that someone as internationally recognised as Bone Thugs will be playing at the Labor Club.

Can I get up and cut sick on my kazoo?

Is there a higher res image? Can’t read it very well.

Hmm the poster was 800px wide but I guess it gets re-sized for posting.
Theres a bigger version and text/video info at kokyprik.com.

Any questions feel free to hit me up here, I’ll be checking in.

Says it all really

Is there a higher res image? Can’t read it very well.

estelle3724 - 34 minutes ago
I would like to ask Ms Castley what more she wants the government to do for business. She never mentions that business receiv... View
Lifestyle 15

TimboinOz - 54 minutes ago
yes, thanks for expanding on my post!!! View
Nathan Marc - 1 hour ago
Christopher Hara View
Erin Davies - 10 hours ago
Courteney Amanda is this a clue 🕵️‍♀️... View
News 5

phydeaux - 1 hour ago
Rather my point, JS9. “…without qualification”. With significantly different individual circumstances, to give an answe... View
Kathy Blunden - 2 hours ago
I was also totally shocked with my electricity bill. It is the highest bill I have ever received and I have solar panels!!!... View
JS9 - 2 hours ago
It is a weighted average across a range of plans - so it means some will go up more, some go up less. Over the basket of plan... View
News 6

2902 - 2 hours ago
Imagine the money one could make building apartments on this site, right out the front of the proposed light rail track View
ChrisinTurner - 2 hours ago
There is not enough attention to maintaining services in areas with dense populations. The government seems to be working on... View
JS9 - 4 hours ago
I assume there must be some form of contract that requires the pool to be maintained and provided to the community for a mini... View
News 12

Deborah Gale - 6 hours ago
Nada Krstin The vaccine gives protection and greatly reduce the likelihood of serious disease which is great. But children wh... View
Acton - 8 hours ago
We can’t hide from a virus and although vaccination mitigates the effect on yourself, it doesn’t stop you getting it, or... View
Peter Marshall - 8 hours ago
No Nada, that is not the point of the vaccines.... View
Courts & Crime 1

lexyliz - 7 hours ago
Does anyone know what happened with this case? A friend mentioned it yesterday as we are planning to send our son to this cen... View
News 7

Katie Painter - 8 hours ago
But the fully Vaxxed rate is 93.3% in Eurobodalla, the second highest in NSW as of 25th Oct. And Bega Valley >95% first dose,... View
show more show less
*Results are based on activity within last 7 days

@the_riotact @The_RiotACT
Police are investigating a break-in and vandalism at the Jillabenan Cave at #KosciuszkoNationalPark in which the 200-million-year-old wonder was damaged https://t.co/dJDC0BLkB5 (4 hours ago)