In the wake of last night’s unforseen deluge (can we stop with the bogus panics now?) there’s been some pretty severe damage to chunks of Civic. The Canberra Center and ANU are both shut down for at least today but I found this comment by Meconium to be particularly worrying:

My girlfriend and I were watching Letters from Iwo Jima in Cinema 1 of Dendy, the 9.30 session. At about a quarter to eleven the sound of rain started to drown out the gunfire, and on the hour the roof sprung a few leaks. It was pouring out of a few places along the midline of the cinema, and soon staff started rushing in with buckets and the film was stopped.

Everyone was told to stay in the building, at first, due to the huge hailstorm, but after ten minutes or so we were told to gtfo. As far as I know it was raining inside every cinema, including the two premium lounge cinemas. Everyone was told that if they present their stub, they would get one complimentary admission. I see an exploitable situation hereâ€¦

Outside, the ice was piled up and people unfamiliar with these road conditions were driving like idiots. Iâ€™m not surprised there were lots of accidents tonight. The hail seemed to end as close as Lonsdale St to the north, and maybe as far as the Uni in the west.

Cinemas are high voltage environments and we hear these stories after nearly every downpour (in this water restricted drought wracked city). How long before someone gets killed?

UPDATED: Al has sent in the following pictures of woe from inside the Canberra Centre: 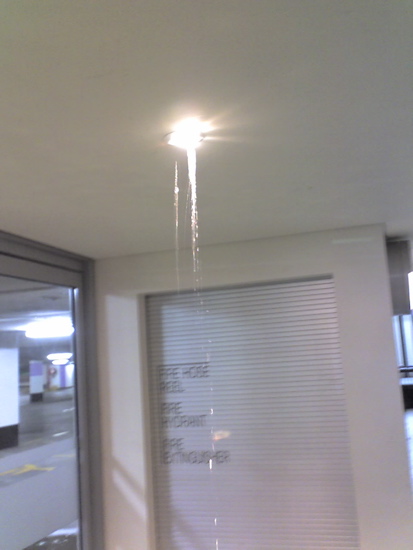 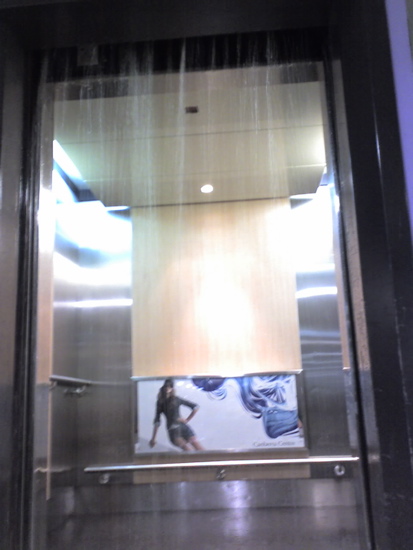 Not my pics sorry – another email doing the rounds…I just sent them on to JB.

It’s simple. Dendy showed An Inconvenient Truth and was consequently hammered by the Gore Effect.

So some hail fell and a few of us got a bit wet. Not ideal but hardly the end of the world.

Warnings flashing on TV screens for storms that never come, no warnings for the biggest storms of all, it’s mountain weather, unpredictable.

Isn’t this the second time the Dendy has flooded, since opening only a few months ago?

Will Newby - 31 minutes ago
Why they still have us QR coding into everywhere is a mystery. They gave up on proper contact tracing ages ago yet we all sti... View
kenbehrens - 1 hour ago
Anyone with half a brain knows that keeping your distancing from others and wearing masks etc, can reduce the risk of contrac... View
News 4

Bekah Glaz - 46 minutes ago
You mean it isnt already a requirement in year 9 health in ACT? View
Opinion 6

Earthdog - 46 minutes ago
Obviously you have not been to a Wiggles concert (my four year old daughter Alex and I in Brisbane around 2003). The Moshpit... View
Earthdog - 56 minutes ago
Simon, I think what you really mean is that if you were any older you would be curmudgeonly. When I have a rave (meaning a ch... View
Simon Cobcroft - 1 hour ago
Yes, nothing speaks to the youth of today quite like a cover of a 2012 song sung by a group that makes white bread look dange... View
News 205

Lucas Graydon - 48 minutes ago
Richard Vlazlovski we can only hope so. View
Lucas Graydon - 49 minutes ago
If a flat rate fine is the punishment for breaking a law, the law doesn't apply to the rich. View
mitro - 1 hour ago
Is the income based 'fine' on gross or net income? My Accountant needs to know!... View
Opinion 40

Earthdog - 1 hour ago
The simple answer if you find his behaviour boorish and clownlike is to not watch him. I have restricted my watching sports/... View
Kali - 3 hours ago
Poster boy for the 'it's all about ME' generation. View
Property 2

Malcolm Roxburgh - 1 hour ago
Wholeheartedly agree. The cost of the light rail with out exposed power lines through the Parliamentary Triangle is ridiculou... View
News 18

bj_ACT - 1 hour ago
Of course I’ve read it Chewy. I’ve even read the 1978 report for the ‘proposed Lake Tuggeranong’ that highlighted the... View
News 3

Capital Retro - 1 hour ago
What frontiers are you talking about, Stephen? I know there was a strategy to create the "Brisbane Line" in case the Imperial... View
Lifestyle 4

TimboinOz - 2 hours ago
Good information on this issue has been around for at least two decades to my memory. As a former infantryman and an ongoing... View
Food & Wine 4

Nick Swain - 2 hours ago
This is a challenge to the Fyshwick Markets and their new owners! View
Food & Wine 1

Summernats is always divisive, but on the basis of our poll, it looks like more Canberrans are coming around to...
Opinion 40

@the_riotact @The_RiotACT
The public and the hospitality industry have slammed proposed #pandemic management #legislation which critics say gives the government too much power https://t.co/yvZln96pGl (35 minutes ago)

@the_riotact @The_RiotACT
#Tumbarumba's saddled up for its social event of the year this Saturday 29 January. #Turfclub president John McIntyre says the Tumba Cup's set to be one of the best as #families get together after COVID lockdowns https://t.co/U3sL5ZTdwY (2 hours ago)

@the_riotact @The_RiotACT
The announcement of a new national Holocaust #museum in #Canberra comes in the wake of a report that reveals almost one in four Australians over 18 has "little to no knowledge" of the #Holocaust https://t.co/ojjuaIjCrz (3 hours ago)