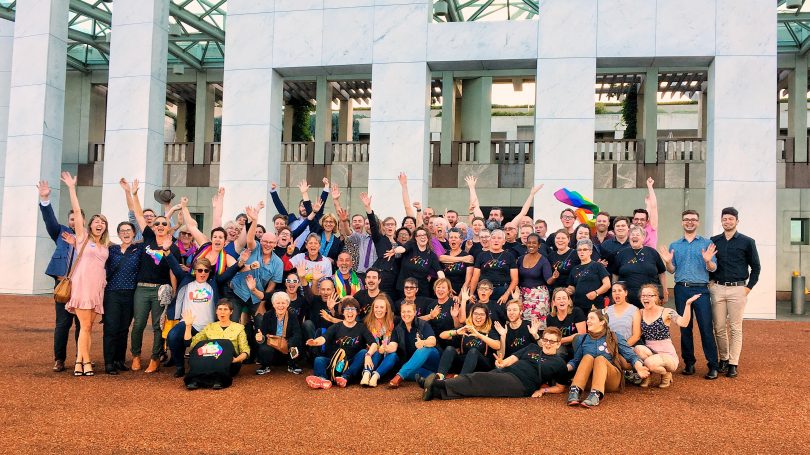 One of the delights of living in Canberra is the opportunity to regularly access great cultural events. While some of them are well-known annual fixtures, others are treats that only come along once in a while.

One such event is the 2019 Out & Loud choral festival from 24 to 28 October. The festival has run every three years since 2001, but this year it’s Canberra’s turn to play host!

Out & Loud is an opportunity to see our local Lesbian, Gay, Bisexual, Trans, Intersex, Queer (LGBTIQ+) choirs join with similar choirs from all over Australia and New Zealand to celebrate pride in the LGBTIQ+ community through music.

The festival is the only occasion when choirs from most Australian capital cities and Auckland meet to share the joy of singing, socialising, inspiring and learning from each other.

An exciting addition this year is the hosting of choirs from across the Pacific region. Thanks to crowdfunding, choirs from Fiji and East Timor will also be attending.

To date, almost 300 people have registered to sing in the choirs.

The final performance will unite all of the choirs and festival-goers at the ticketed Gala Concert at Llewellyn Hall on 27 October, featuring a world premiere performance and a mass choral event.

The Canberra host is the Canberra Gay and Lesbian Qwire, a well-known local choir that performs at events all over the region and beyond.

The Qwire celebrated its 25th anniversary last year and are inviting everyone to come along to celebrate the contribution that LGBTQI+ communities make to our community and enjoy some great performances.

For more information, including tickets for the Gala Concert, visit Out & Loud Canberra.

Mæ Ķaýle - 22 minutes ago
They are saving the RATs for the next "super strain" scare people a bit more first, then raise the prices (which should be fr... View
Zahidul Alam - 37 minutes ago
A very well planned approach. What could possibly go wrong 😂😂😂 View
Shannen McCann-Geiger - 53 minutes ago
7 shops have run out of test in the last 3 hours since this announcement went out. View
Motoring 25

Mark Johnson - 25 minutes ago
Belinda Makrides don’t think it would make a difference. Toyota have a pretty good rep no matter where they are made. The H... View
Mark Wallin - 1 hour ago
A car you operate rather than drive. View
Opinion 43

HiddenDragon - 56 minutes ago
Boiled down, that sounds like an argument for more people on the public payroll in Canberra - good luck with that when the Au... View
Monda Scoltock - 1 hour ago
Alexandra Hunter - no doubt! View
JS9 - 3 hours ago
While the health system had in totality coped fairly well, I'm not convinced it has held up as well as it may appear. A not s... View
News 32

@the_riotact @The_RiotACT
After more than 25 years, the iconic #Sfoglia Patisserie and Cafe in #Dickson will serve their final coffee this Saturday https://t.co/NROhjkTshL (3 minutes ago)