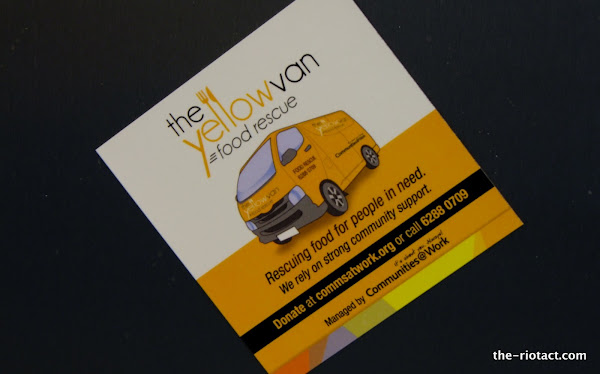 Andrew Barr has heralded the rebranding of the hardworking OzHarvest food rescue service as “The Yellow Van”.

Although the name of the service will change, the operations of the service will remain the same. The Yellow Van will continue to collect excess food from restaurants and supermarkets, which would otherwise be discarded, and distribute it to charities and refuges around Canberra. The Yellow Van will also continue to be managed by Communities@Work.

OzHarvest Canberra, which was established in February 2008, has previously operated under a licence from OzHarvest Sydney. Operations have now matured to a point where OzHarvest Canberra is able to operate independently, which led to the decision to rebrand the charity to a well-known local symbol of the service – The Yellow Van.

Each month The Yellow Van rescues more than 16,000 kilograms of otherwise wasted food from more than 90 regular food donors, and distributes it to about 70 charities and refuges that help disadvantaged people in our community. There is no charge for the service and it operates with the assistance of volunteers, which keeps operating costs to a minimum and allows food to be delivered for less than $1 per meal.

[RiotACT has been the recipient of a thick wedge of Yellow Van fridge magnets one of which is pictured above on The Eagle’s Nest refrigerator.]

I for one welcome the new logo!

Bethany Williams - 3 hours ago
Ric Hingee that’s something that would be AMAZING.....if it was able to happen! It’s been floated before, but the issue i... View
Ric Hingee - 5 hours ago
Ella - I am surprised you have any money to donate to Labor after paying all the excessive taxes, charges and rates that the... View
Ric Hingee - 5 hours ago
Bethany Williams The minority parties and independents needed to find common ground and run as a team. Otherwise they are pro... View
News 53

Michael Quirk - 4 hours ago
Charny Barney bus rapid transport would operate on its own right of way. Suggest you look at the Brisbane metro to be operati... View
Ric Hingee - 6 hours ago
Charny Barney You really are a clown and I suspect a pretty bad one at that. View
Ric Hingee - 6 hours ago
Justin Watson We are talking about rubber wheeled trains running on an imbedded fixed course, not on a normal road. View
ACT Election 23

thebscaller - 11 hours ago
Joke of a leader and party. They are making some bold statements and promises that don’t add up. There is no way these prom... View
Acton - 14 hours ago
A conservative is someone who is averse to change. The Labor Party has now held government in Canberra for 19 years, proving... View
JS9 - 15 hours ago
"The problem would appear to be how to pay for them and it’s not easy to pin down Mr Coe on where the money will come from... View
ACT Election 12

Caz Ireland - 14 hours ago
Anyone remember when Labor shut down all those schools about 15 years ago? They’ve had 20 years in government so their reco... View
Keith Cheetham - 1 day ago
Pork barreling at its best as Labor does. And then dont initialise it. View
Bronwyn Wilson - 1 day ago
Where are e teacher librarians going to come from? There are very, very few in the ACT - that’s why so many schools don’t... View
Lifestyle 9