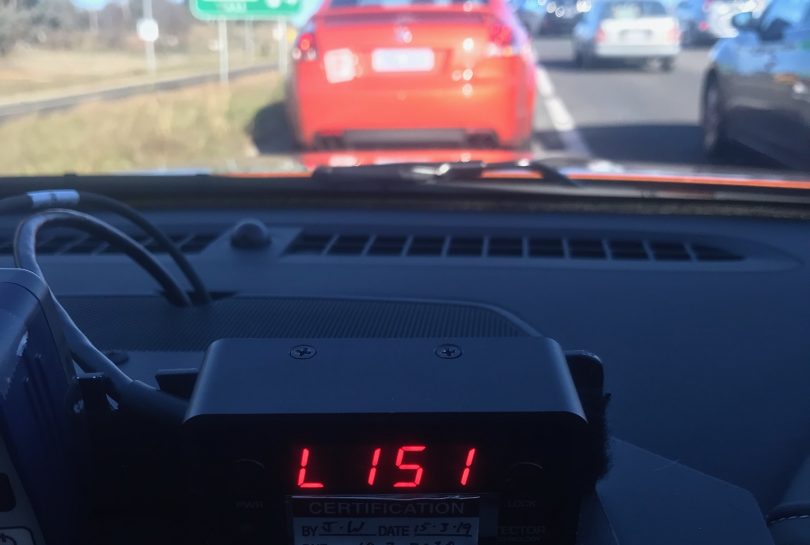 An 18-year-old driver has been slapped with an $1841 fine after being caught driving over 150 kilometres per hour on Gungahlin Drive this morning (24 June).

Around 9:20 am, police observed an orange Holden Commodore sedan travelling south on Gungahlin Drive, Mitchell. A police speed check found the vehicle was travelling at 151km/h in an 80km/h zone, nearly double the sign-posted speed limit.

The 18-year-old man, who was on a provisional licence, was issued with an infringement notice for $1,841 and six demerit points.

Officer in Charge of Traffic Operations, Acting Station Sergeant David Wills said this type of behaviour was particularly disappointing from a young driver.

“Provisional drivers are some of the most inexperienced on our roads, and as such, they should be taking even greater care when behind the wheel, not driving at more than 150 kilometres an hour,” Acting Station Sergeant Wills said.

“Clearly this driver had other ideas, and thankfully nobody else is paying for his poor judgement.”

A report released last week found that 31 per cent of participants aged between 18-24 years admitted to regularly exceeding the speed limit by over 10 kilometres per hour. Following the results of the survey, the ACT Government announced that two additional mobile speed cameras will be rolled out to combat speeding.

Daniel Pickering - 13 minutes ago
Legend. Taught me at Melba high back in the day. A great mentor! View
Ramon Montero - 2 hours ago
I do remember him when started arbitrate football, indeed very polite and educated a young person. I had the privilege to mee... View
Kacey Butterworth - 14 hours ago
I feel extremely privileged to have had Ben as a mentor, teacher and year co-ordinator throughout my high school years. He ta... View
News 27

chewy14 - 1 hour ago
JWinston, Climate change is most definitely real, although Flannery isn't really a figurehead or anyone that represents a pos... View
retep - 16 hours ago
*sourced. Geez it's a rough day.... View
retep - 16 hours ago
Applause. Thanks for your efforts. We too try to alleviate our energy use in similar ways. Also agree with your observations... View
Public Sector 3

Ol L - 2 hours ago
If it’s not a museum then why have so many artefacts on display? Surely a very somber and minimal display of artefacts woul... View
Kerry Apted - 13 hours ago
Tiger Fit it's irrelevant what you see it as unfortunately. They're not "trying to turn it into a museum", it's already a mus... View
Tiger Fit - 13 hours ago
Kerry Apted that's not how I see it View
Opinion 1

GRAPHIC CONTENT: Some readers may find this court report highly disturbing. A Canberra man has been found guilty of repeatedly...
Food & Wine 22

It's higher off the ground than any of its rivals. It has an all-wheel-drive system and driving modes for deep...
News 27

No licence, no rego and teenager was 62km/h over the limit