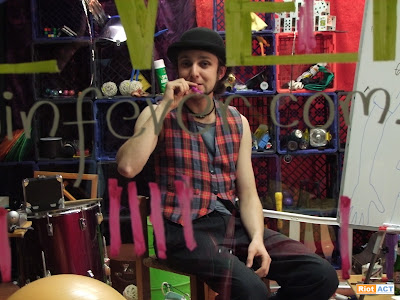 Pablo Latona has finally taken reality television to where it should have gone in the first place.

No, not a real-time recreation of the prisoner’s dilemma.

Merely a man with talent, who’s putting himself on the line.

At high noon on Saturday 23rd August, Pablo put himself into a living, breathing and occasionally sleeping piece of art.

This coming Saturday he will emerge victorious, sleep-deprived and possibly more eccentric than when he walked into his 24-7 performance stage, otherwise known as the Alinga Street shopfront in the Sydney Building at the Civic bus interchange.

Surrounded by circus implements, a permanent house of cards, and his trusty keyboard, Pablo has been bringing living theatre in a box to the people of the bus interchange all this week.

Sometimes the crowd interacts and is even witty. Mostly Pablo gives them what for and keeps them laughing…occasionally uncomfortably.

You have until Saturday to see what could be the most innovative piece of drama to hit Canberra in quite some time. Seriously.

Swing by on the way to work, or on the way home from the pub, then just sit back and watch Pablo work the crowd from behind the glass.

Oh and bring him a cupcake. He likes cupcakes.

Cabin Fever can be viewed live in the Alinga Street shopfront (next door to The Barracks) or online at www.cabinfever.com.au

*however you do an angry smiley*

No cupcake for you, young man.

I did go and watch it yesterday thank you blueberry. I was pretty disappointed. Thought you said he had a rare ability to win over an obnoxious crowd? When I was there, they were swapping abuse and he even told one fella to fuck off (several times). Yeah, a real talent that guy…
Reckon you should re-evaluate what you perceive as art and some dickhead bravely swearing at people from inside a locked shopfront.

You have until Saturday to see what could be the most innovative piece of drama to hit Canberra in quite some time. Seriously.

At present it appears that two girls dressed in giant rabbit suits are dancing to an old jazz record whilst another girl in red is walking/ dancing around.

This is just so out there, seriously….

>This is a person inside a box being watched by the public. His actions are controlled by the watching public.

No this is a guy in a room who is performing what he wants to perform and he is not just being watched he is interacting with the audience engaging them in parts of the performance. If you went and watched it you would know that.

I wouldn’t call it art. I mean, really, how much talent does it take to sit in a room?

None whatsoever … but it probably takes a certain ‘je ne sais quoi’ to be entertaining whilst doing so. I, myself, am not a terribly interesting sitter I must confess, but everybody has their weaknesses.

This is a person inside a box being watched by the public. His actions are controlled by the watching public.

^This is such a scam it’s not funny.

I reckon it’s a great idea. In fact, I’m orf now to buy the bloke a cupcake!

Well, I’m a member of the Canberra public and this is my reaction. It’s a bit silly, I think. Please enjoy the feedback.

Big brother is not about actively performing it is about watching how people survive when they are cut of from the world.

Pablo is in there to perform and develop new works in front of a live audience. He is in control and He is able to interact with his audience, so yeah actually it is quite different to big brother.

It is about creating and engaging rather than being controlled and watched. Very different if you think actually about it.

>Hey DMD, let’s get someone to sponsor us drinking beer in the front window of the Pot Belly.

>It will be rivetting!

Well why don’t you go and do it then? Art or not Art aside, if it is really that easy then surely even you would be able to do it? Then you can let the Canberra public decide if you are entertaining.

If you went and watched Pablo for a while you would actually understand why he is doing this. Actually you don’t even have to watch him, just watch the people who are watching. It is about inspiring people to think out side of the box, step out side of their comfort zone, be creative and do something they never thought they could do rather than sit around all day being spoon fed their lives by the television.

Thumps you already owe myself and the Sanchez a number of beers at the pot on account of all those shouts you have missed already.

Its been hard keeping up with having to carry that extra burden of drinking your beer too.

Dude…my thoughts exactly. It will be about society and how someone drinking beer and arguing about stuff will err…beer stuff beer. Give me money, somebody.

Hey DMD, let’s get someone to sponsor us drinking beer in the front window of the Pot Belly.

It will be rivetting!

I watched him eat. It was fascinating. I feel I learned something about society that day.

>Oh please. That line really doesn’t say much for Canberra. This is just some idiot’s sad attempt for a bit of cheap publicity. I’ll give him his due though. He’s quite clever in the fact that he knows most Canberrans, being utterly stupid, will actually think it’s something worth going to see.

Give it a rest, Have you actually gone to see some of the stuff he does? Because it doesn’t sound like it.

He is not just sitting in a room he is performing pretty much all day. He has also been collaborating with other performers from around Canberra. He is an amazing performer and has the rare ability to win over the most obnoxious crowd in interesting and innovative ways.
Heck he even had a guy come in and pass juggling knives to him who had been threatening to beat him up not 10 min before.

Before you start ragging on it I would suggest you actually go and watch for a bit.

Kriso Hadskini - 2 minutes ago
Speculators are buying property that should be for families. And if you are obscenely wealthy why would'nt you? 10% a year in... View
Beck Bianco - 56 minutes ago
Probably because Canberra is no longer affordable so people move to drivable towns outside of Canberra View
Michelle Preston - 1 hour ago
Property prices in Yass are over priced. View
Property 20

Anna Musgrove - 15 minutes ago
Nicole McGuire look it’s not that great. So far it hasn’t been too yuck in the shower. We use it on tea/coffee but never... View
News 22

Ben Keaney - 41 minutes ago
Also if they are not in the numbers that the anti-brumbies say, what do you think a maximum brumby population should be? Sure... View
Ben Keaney - 47 minutes ago
Di exactly how do brumbies keep the fuel load down? Do they eat fine forest fuels such as sticks and leaves? Or Perhaps its t... View
Di Hunter - 4 hours ago
Jackie Hattingh it’s actually proven that they don’t and it is also proven that they are not in the great a numbers as th... View
News 7

Jeffrey Brown - 9 hours ago
Ahhhh those were the days. Standing in the queue and watching the odd brawl of dudes trying to prove their worth. Was normal... View
Lifestyle 8

@The_RiotACT @The_RiotACT
Hot in the City: Al Manoosh is serving up a Lebanese breakfast spread in Mawson https://t.co/NbUW7gTjh2 (3 hours ago)

@The_RiotACT @The_RiotACT
Canberra's Aspen Medical is managing the complex quarantine project for over 1000 players and support staff at the Australian Open https://t.co/2g9k9PDi8r (4 hours ago)