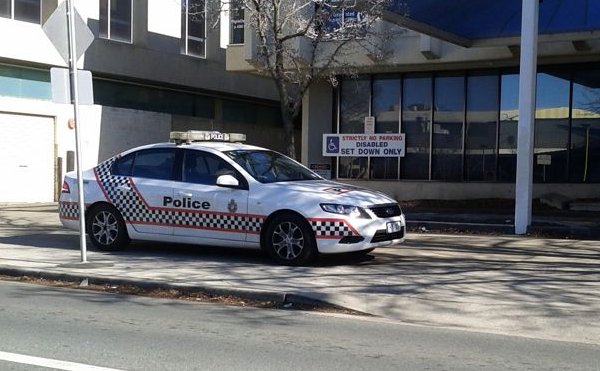 This in from Phil:

Took this the other day after the cops had been booking cabbies for doing the same thing!!

I reckon they should obviously be allowed to park anywhere in an emergency, but if it’s just a routine thing, it isn’t a good look to be breaking the laws that they enforce without good reason.

+1 There’s a cop car there quite often… No probs, for mine.

Next time I call 000 I’m hoping that I don’t hear the operator say “listen, they’re on the way. Can’t give you an eta cause they need to walk 6 blocks to the Canberra Centre underground car park and pay for the parking. They can’t go fast cause it might scare the cyclists and they have to stop for red lights cause there are very important people in this city that can’t afford the 15 second delay. That’s just how it is.”

I would think there are bigger problems in this city than the police parking in spots regular Joe can’t. Y’know , like the large group of vigilantes running around town with camera’s taking photos of any old thing they can have a whine about and posting it on the Internet.

Are the police expected to circle the block looking for a vacant parking space, while some villain goes about his beagle boy ways ? I dont see what the issue is here.

I can imagine the whining if the police failed to arrest someone, because they took too long to park their car.

*Yawn* Bored shiny bum takes photo of police car parked legally (he even says in his whinge that they were there to book cabs, thus fulfilling the relevant road rule).

Take a look at road rule 307, then we can turn this into a three page thread on the wording of the rule. They were parked there performing their duties. Safely. You’ll probably argue that police shouldn’t be allowed to speed to catch speeding drivers. Get a life. Please.

Actually, don’t bother starting an argument. I just do drive-by comments these days. Comment, then leave the thread forever, allowing me to avoid ridiculous arguments with people like the person who sent this in.

Well after the cops deal with the person they are arresting he may very well be disabled!

You post this if it were a new thing, I have seen them doing this in that spot for at least the last 4-5 years.

Come on now, be fair. There may well have been an emergency, the nearby donut shop could well of been about to close.