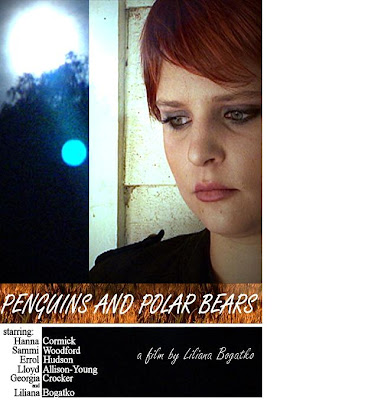 Liliana Bogatko’s second film about life with bipolar disorder, “Penguins and Polar Bears” is premiering next week at the Belconnen Theatre (Part of Belconnen Community Services). Her first movie was “Another World” which screened in 2007. Here’s the blurb for Penguins:

Liliana Bogatko’s new film Penguins and Polar Bears delves into the complex relationships forged in a family affected by Bipolar Disorder. After a mysterious two year absence, Barry and Kathleen’s daughter, Jane, appears out of the blue. As Jane struggles desperately to reconnect with her family, they try to understand and accept the person who left such a whirlwind of destruction in their wake.

A story of betrayal, forgiveness and family, Penguins and Polar Bears reveals the stories of those whose lives are affected by a family member with a mental illness.

This heart-warming, and heart-wrenching, film is for anyone who has tried to reach out to someone else and reconnect.

Bellelis Australia - 28 minutes ago
Phillipa Leggo thank you. Can't wait to see you in the shop to show you around 😊 View
May Mac - 16 hours ago
The only reason we switched to landfill nappies was the struggle to keep line dried reusables from stinking of woodsmoke in w... View
Phillipa Leggo - 17 hours ago
Well done Olga Imbriano - lovely article👏👏👏 View
News 3

jorie1 - 11 hours ago
Of course the ACT government wants more and more apartments as they are only interested in how much money they can gouge from... View
Ol L - 16 hours ago
NOVEMBER 11 2019 - 12:01AM Canberra is home to the biggest houses but the smallest units, new report shows... View
chewy14 - 17 hours ago
Capital Retro, The median price for apartments and townhouses is significantly less than for detached dwellings. So if the pr... View
News 44

@The_RiotACT @The_RiotACT
A faster rail connection between the two capitals is long overdue. NSW needs to go all the way in its go-it-alone regional rail plans https://t.co/A0eXTCwFE7 (11 minutes ago)