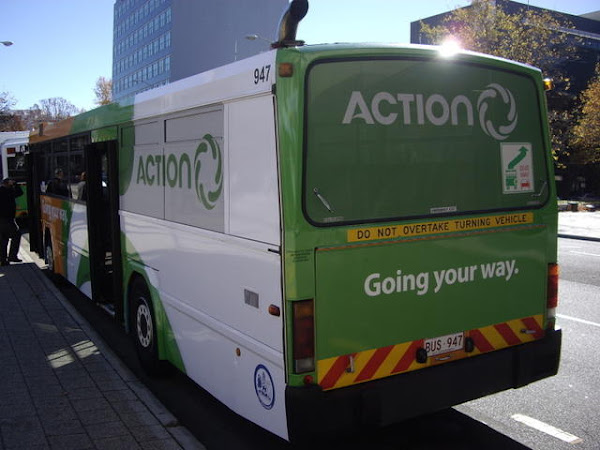 We’re running a petition for ACTION Buses to start using Twitter in order to better communicate breakdowns and canceled services to patrons.

A Twitter account costs nothing to set up, could be advertised for free on the ACTION and TAMS websites and it would not be too difficult for somebody at the depot or radio room to quickly send a Tweet from their computer. With more and more people using smartphones, the service would be invaluable.

We’re sure there are other other practical uses for such a Twitter feed – if you have any please let us know and we’ll incorporate them when we send the petition in.

An example tweet “Route 313 from Tuggeranong at 7.32am has broken down. The next service departs 18 minutes later at all stops”

131500 Buses in Sydney are already running a similar service that has been quite well received.

You can sign the petition here. Thanks for your time 🙂

How about an RSS feed with service announcements then? Even easier than Twitter on any phone worth it’s salt, would be available on networks where Twitter is not permitted and not reliant on any third party application or passing fad.

Thanks for the responses, and thanks also to those who have taken the time to sign.

johnboy – Thanks for publishing. The website is something that needs a lot of work. Unfortunately I think using that to run updates on late/canceled buses is too labor intensive – it would be far easier to insert a twitter feed on the site. The website is also not very phone-friendly (as sammy points out)

Spectra – we believe the cost and time involved would be minimal. Davo – task could easily be undertaken by existing staff

Keijidosha – Very good observation regarding ACTP. Being a 24/7 operation they obviously have more than one person operating the feed. No reason why ACTION cannot do the same.

Holden Caulfield – Agreed and I have used that example elsewhere.

By all means, keep the ideas and comments coming as we will put together a brief on these sorts of issues when we submit the petition. A twitter feed could easily be incorporated into the iPhone app TAMS are supposedly working on.

The whole idea is to make life easier for commuters – one comment on the petition gave a scenario of wondering if a bus is broken down or just late. By checking a Twitter feed the answer is at their fingertips. If broken down, they can see when the next one is, walk to another route nearby or go home and get the car. If it’s late, they know to stick around.

I think it is a reasonable idea, although as mentioned someone at Action needs to have that task of sending updates (which can be sent via smart phones, dumb phones (SMS), or web browser).

When we see it depends on whether the idea goes to the “adopt Myway” (fast queue) or “Google Maps Integration” (slow queue).

Twitter is a perfect solution for this issue and involves zero cost outlay.
As pointed out, the dispatcher could be pumping out tweets between sips of coffee. Hardly a difficult or expensive exercise. ACT Traffic Police seem to have it worked out and their feed is timely and very useful.

If they have a proper fault logging system (knowing ACTION, it’s a big if), it could be almost automatic.

Maybe the example tweet could read: ““Route 313 from Tuggeranong at 7.32am has broken down. The next service departs 18 minutes later, give or take 15 minutes, at all stops”

Bollocks. Checking a twitter feed using a phone over 3G is a two-second effort. Checking a website on the same is a downright pain.

Agreed. We already have a perfectly good system for disseminating information to the public – it’s called “the web”. We don’t need every company and institution to jump on every passing internet bandwagon and fad – they’ve got enough stuff to spend their time and money on.

But if ACTION told you all the times they failed, you’d know that they fail all the time. I can’t see ACTION management agreeing to that.

Mæ Ķaýle - 18 minutes ago
They are saving the RATs for the next "super strain" scare people a bit more first, then raise the prices (which should be fr... View
Zahidul Alam - 34 minutes ago
A very well planned approach. What could possibly go wrong 😂😂😂 View
Shannen McCann-Geiger - 49 minutes ago
7 shops have run out of test in the last 3 hours since this announcement went out. View
Motoring 25

Mark Johnson - 21 minutes ago
Belinda Makrides don’t think it would make a difference. Toyota have a pretty good rep no matter where they are made. The H... View
Mark Wallin - 1 hour ago
A car you operate rather than drive. View
Opinion 43

HiddenDragon - 52 minutes ago
Boiled down, that sounds like an argument for more people on the public payroll in Canberra - good luck with that when the Au... View
Monda Scoltock - 1 hour ago
Alexandra Hunter - no doubt! View
JS9 - 3 hours ago
While the health system had in totality coped fairly well, I'm not convinced it has held up as well as it may appear. A not s... View
News 32

Cowra’s cheeky campaign set to get Chris Hemsworth to town