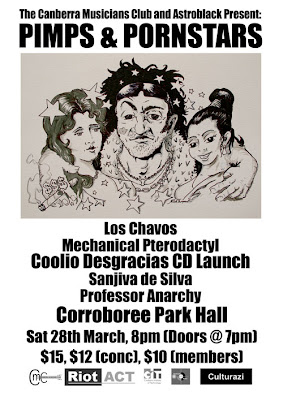 The following in from the Canberra Musicians Club:

Representing North Canberra, Coolio was born and raised with hip hop. He was there when Herbie Hancock’s Rock It won a grammy, saw Breakdance and Beatstreet at the movies and was in high school during the golden age of hip hop. Taking a leaf out of Outkast’s book, Coolio seeks to bring the hip hop to any style he inhabits. Whatever he does will always be that pimp shit, that freshly baked schwarzwald kirsch kuchen shit.

Armed with a swag of original material, some help from Canberra’s music community, copious amounts of ginger beer and a house full of instruments, Coolio spent January 2009 recording his first album. The result is a mixture of hip hop, funk, disco and country that will get your toes tappin’, your hands clappin’ and start any party right. For the moment Coolio is solely a studio project but there are plans for him to tread the boards in the future. He will make a special appearance at the cd launch.

Kizzle, they will be waiting for you in Fyshwick and will be more than happy to see you after the launch to compare outfits.

Where are the hoes?

Yo! Hit me with that freshly baked schwarzwald kirsch kuchen shit already!

It’s just the German name for Black Forest Cake, although as a noun Schwarzwald should properly be capitalised.

Most people know what a pimp is. What needs explaining is ‘schwarzwald kirsch kuchen shit’. And do it soon…

“pimp” when used as an adjective means flashy / ostentatious. The etymology is from the loud over-the-top outfits pimps were reputed to get around in (the kind of fashion you can get from pimphats.com).

“Whatever he does will always be that pimp shit, that freshly baked schwarzwald kirsch kuchen shit.”

Can anyone translate this into English for me?

No points for originality with that theme.

The event doesn’t really sound all that bad, but he hasn’t done himself any favours with a title like that. It’ll be going on the places to avoid list.

“Whatever he does will always be that pimp shit, that freshly baked schwarzwald kirsch kuchen shit.”
So what does the promotor mean by that “pimp shit?”
Will he be beating on his “ho’s” or something..

John Dale - 23 minutes ago
Yep, great idea. I don’t see even one appeal coming out of this. Not one. No, seriously.... View
Opinion 15

John Hynes - 24 minutes ago
MB Miyagi or throw matches for bookies like India has done View
MB Miyagi - 26 minutes ago
John Hynes or spending more than they are allowed to like Carlton did 😃 View
Steve Frame - 2 hours ago
Lisa Bishop if they don't pass the money they make from selling the tv rights and selling out stadiums to the players, the we... View
Food & Wine 2