PLA Raiders get their groove on over the Warriors

Foxsports has the good news of a win for the Canberra Raiders at home yesterday over the South Auckland Warriors:

Two-try hauls to Reece Robinson and Jarrod Croker pushed Canberra to a comprehensive 32-12 victory over the Warriors for their first home win of the season.

The Raiders led all day against last year’s grand finalists, setting up victory with a four-try opening half and then outscoring the Warriors again after the break three tries to one.

It was an impressive performance that pleased even coach David Furner, particularly coming off the back of last week’s stinging 22-6 defeat to North Queensland Cowboys.

But wait, there’s more! The Brisbane Times has word that plans are afoot to show the new Chinese overlords just what they’ve bought:

China’s ambassador to Australia Chen Yuming was an interested onlooker at the Raiders’ impressive 32-12 Easter Sunday win over the New Zealand Warriors at Canberra Stadium yesterday.

Afterwards, Canberra boss Don Furner confirmed the Raiders will explore the viability of staging a pre-season game in China, in January or February next year.

”Certainly we have had some talks and the powers-that-be at Huawei were keen on us investigating the idea of playing an exhibition or trial game in China,” Furner said yesterday.

”They literally brought it up and said to think about it. 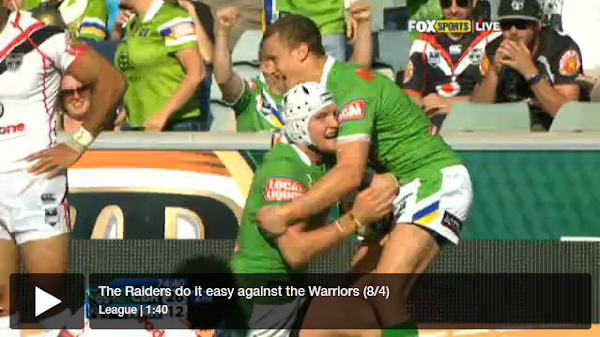 I wasn’t joking. It was genuine advice. Peace.

Note to Raiders management: Be careful if the team goes to a banquet with Chinese officials. The post-toasts merriment could lead to bad PR. That said, I’m sure an NRL player could drink a CCP official under the table.

One should hope that no pictures surface of any players in a compromising position with a panda.

Some decent tries there by the Raiders. Please keep up this form long enough to cement a spot in the top 8.

Playing a demonstration game in the Chinese winter?! I hope it is somewhere in the south where it isn’t so cold.

Note to Raiders management: Be careful if the team goes to a banquet with Chinese officials. The post-toasts merriment could lead to bad PR. That said, I’m sure an NRL player could drink a CCP official under the table.

Karen Feng - 16 minutes ago
$65K for two people. I wonder if this will be the form of new age care. Can gov just legalise euthanasia?... View
Simon Bailey - 3 hours ago
More money than sense. View
Krystle Anne - 6 hours ago
Anne Athema Jill Lyall Unlucky for them if someone unplugs the freezer lol 😂 View
Food & Wine 113

Rowan Hartcher - 12 hours ago
Alan Hopkins like wise View
Peter Quinn - 13 hours ago
So when can we celebrate colonisation????. Whatever day is nominated it will always be contested View
Alan Hopkins - 13 hours ago
its not that hard to change the day. just do it... View
Opinion 24

Bradley Heanes - 15 hours ago
Didn't the defence department already appologise for this? (Even though they were assisting the RFS at the time) Didn't they... View
franky22 - 17 hours ago
Why can't the ADF simply state that they made a mistake. View
News 21

Julie Macklin - 18 hours ago
Mark Katalinic Likewise why not use the roads for car racing? No, silly suggestion, as is yours. View
Julie Macklin - 21 hours ago
Tim McMahon Well, mine hasn't had a check since they closed the government registration check in Dickson years ago. Yes the c... View
Sport 3

Magpie Allan - 20 hours ago
Undoubtedly the two icons are among two of the greatest men you’ll could ever meet.... View
Breaking 5

Tramcar Trev - 21 hours ago
Simple do what other regions do, use local volunteers to staff the visitor centre. View
show more show less
*Results are based on activity within last 7 days

More than six months after a key city development fell victim to the COVID-19 pandemic, a crane has been erected...
Property 13

The refurbished, colonial slab cottage with sprawling gardens at 16 Wells Place, Bellmount Forest, which originally served as a Cobb...
Breaking 0

More than $300 million will be set aside to help the Territory transition to net-zero emissions in the upcoming ACT...
Community 19

@The_RiotACT @The_RiotACT
This week’s newsletter covers everything from a sumptuous Lebanese breakfast spread to algae in Canberra’s waterways to lively discussion around Australia Day https://t.co/hyR7zinwv6 (9 hours ago)