Plans out for Fetherston Gardens 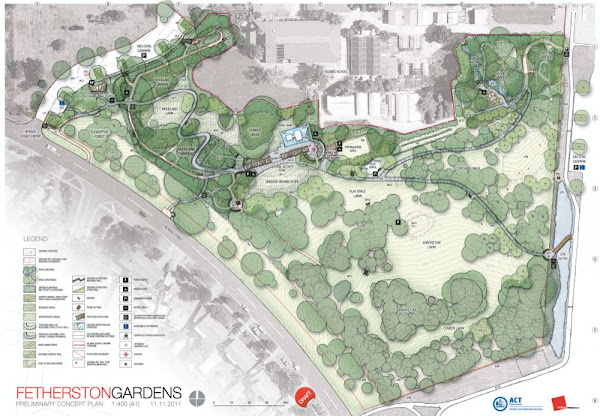 Territory And Municipal Services have a page up with plans for yet another of Canberra’s forgotten arboreta, Weston’s Featherstone Gardens:

Fetherston Gardens, which opened in 1974, was part of the former Canberra Institute of Technology (CIT) School of Horticulture in Weston. The gardens are named after the first and longest serving head of the school, Tony Fetherston. The gardens consist of a well-established arboretum, woodlands garden and an enclosed ‘secret garden’.

Following the closure of CIT’s Weston campus in 2002, the gardens ceased being used as a purpose-built educational facility. However, the site has retained more than 200 trees that include many unusual species used for training purposes during its CIT period. For this reason, the garden’s layout constrains traditional high use public infrastructure.

The ACT Government has been working with the Weston Creek Community Council and the Friends of the Fetherston Gardens to bring the gardens back to a condition where it can be used by the community. Weston Creek Community Council has also been proactive in coordinating regular volunteer working bees to remove weeds and maintain the garden beds. The former classroom building of the CIT campus has been retained for use by the Islamic School of Canberra.

“Following community consultation held in August 2011, a Concept Plan has been developed to identify opportunities for the future development of the site as funding opportunities become available.

“Proposed ideas for the upgrade include:

— picnic areas
— additional seating
— shelters
— enhanced landscaping
— new footpaths
— a small play space
— improved lighting
— extension of the existing stone wall and relocation of the existing sun dial to a more prominent place within the park as a memorial to Tony Fetherston, the first and longest serving head of the school, whom the gardens are named after.”

That is a beautiful area and is a jewel in Weston’s crown. Can’t wait to see this come to fruition, it’s an example of the community and government working together to make something really special

I didn’t know there was a garden. Tony Featherston had a very major impact on horticulture in this region, through his students who are still involved in horticulture and in turn seeing his teachings incorporated into relevant areas, and being taught to the next generation.

I’m glad the garden is to be resurrected and used.

Capital Retro - 11 hours ago
When I was younger I climbed to the top of Pidgeon House Mountain inland from Ulladulla and was amazed to find some Banksias... View
Karina Widjaja - 15 hours ago
Lyneham ... spotted 3 💛🖤 View
Suzanne Lloyd - 16 hours ago
They are regular visitors in Latham. View
News 46