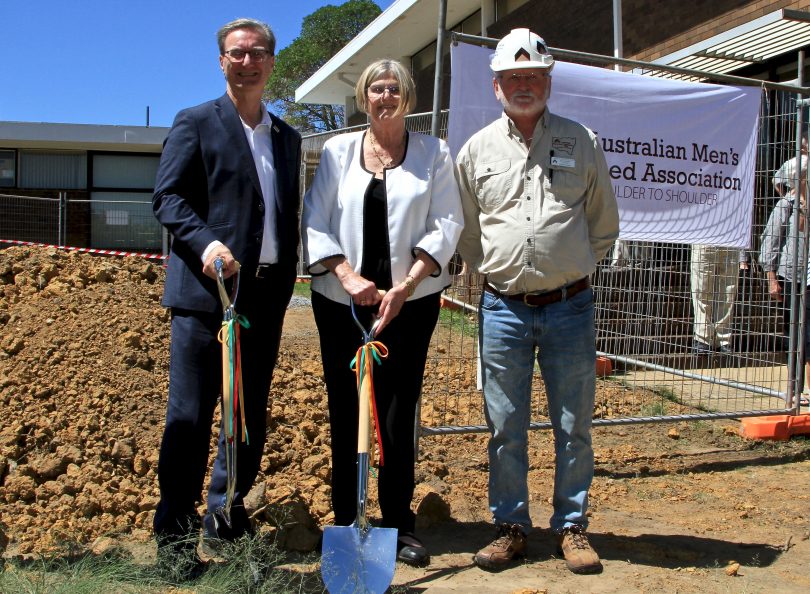 Minister for Seniors and Veterans Gordon Ramsay and CEO of the ACT Council on the Ageing Jenny Mobbs with Men’s Shed coordinator Jim Thornton at the site of the new Men’s Shed at Hughes. Photo: File.

The launch last week of the ACT Government’s Age-Friendly City Plan has come at a crucial time for Canberra’s senior citizens, with the COVID-19 crisis highlighting issues that many in the national capital refuse to acknowledge.

The government says the focus of the Plan is on practical measures to address the barriers older Canberrans have said they face in living free from abuse, staying mobile, remaining socially connected and having good access to services.

The comprehensive plan championed by Minister for Seniors and Veterans Gordon Ramsay includes a campaign to encourage local business to provide employment opportunities for older Canberrans, introducing legislation that makes elder abuse a criminal offence, implementing a strategy which supports the mental health and well-being of older Canberrans, working to make ACT Government shopfronts and local areas dementia-friendly, and continuing the roll-out of the Age Friendly Suburbs Program.

Around 12.5 per cent of Canberrans are aged over 65 and this is expected to increase over the next decade.

Council on the Ageing ACT CEO Jenny Mobbs welcomes the Plan and praises Mr Ramsay’s passion for the cause but says the health and economic crises caused by the coronavirus has exacerbated issues that many ‘seniors’ face, particularly elder abuse, discrimination and isolation.

She says elder abuse has always been a problem but Canberra people don’t believe it happens here.

Now, with adult children who have lost their jobs taking refuge in the family home, COTA and legal services are dealing with an influx of situations that may present at first as something else.

”Often it presents as a housing issue,” Ms Mobbs says.

”We might see somebody come to see a housing adviser, but what’s actually happened is that an adult child has moved back into home, unemployed, maybe on drugs, an alcoholic, and gives mum a really hard time, usually mum, and mum won’t report it.”

Often the abuse is financial, and the ‘children’ cut their parents off from their friends by taking their phone or car.

She says criminalising elder abuse is a step in the right direction but it is a hidden issue that needs ongoing education.

Ms Mobbs predicts COVID-19 will also bring a new wave of job discrimination against older workers as governments focus on younger members of the workforce in their push to restart the economy.

”What we’re going to see is a huge push from Scott Morrison and company to get younger people into the workforce now, and older people will be even more pushed out,” she says. ”If they’ve lost a job I reckon it is going to be so hard for them to get another job.”

And this at a time when life expectancy is increasing and the pension age is now 67 and may rise further.

Ms Mobbs, who ran a successful mature age return to work program about three years ago, is also concerned that other taxpayer-funded programs have not borne similar fruit.

More will need to be done to maintain skills and so employers, including government, recognise the value of experience. We might also benefit from a conversation about how we share work, including a possible four-day week.

The other key issue Ms Mobbs sees is a public transport system that lacks the services or flexibility to help older people get around the city and keeps them isolated.

While much has been made of baby boomers’ wealth, an increasing number of older Canberrans are going to need help keeping a roof over their heads as they lose their jobs or retire, even if they have reasonable superannuation.

House prices are simply too high and have been ever since former treasurer Peter Costello put a fire under them with his combination of grants, capital gains tax breaks and negative gearing, a situation that isn’t going to change given the last election result.

The result is that no matter how often you hear about supply issues an increasing number of people have been locked out of the housing market. Even if prices fall, it won’t be enough to make them anywhere near affordable, especially in stable Canberra.

Government is going to have to be more innovative about getting people into their own homes or build more, much more, public and social housing if more older people are not to end up on the street as they no longer are able to afford the private rental market.

Mr Ramsay’s Age-Friendly City Plan is a welcome statement and a genuine attempt to sustain the quality of life for the ACT’s older citizens but amid the economic wreckage from COVID-19 and the legacy of housing policy failure, government has its work cut out to provide tangible responses to issues that many do not want to confront but look set to continue to grow in importance.

Work commences on the Men’s Shed at Hughes