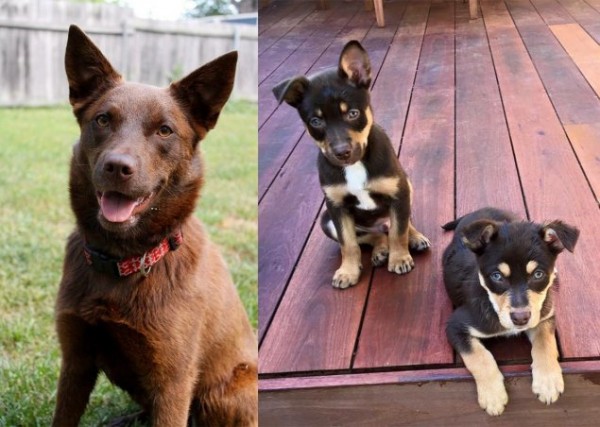 ACT Policing officers are working with the RSPCA as they investigate a distressing case in which two ten-week old puppies and an adult rescue dog were poisoned.

Australian kelpie rescue dog Red Dog and kelpie puppy Tanner died as a result of the crime. Tanner’s brother, Theo, was left critically ill but will survive the baiting, which took place between 8.30am and 4pm in Tepper Circuit, Kambah on November 4.

Charity Australian Working Dog Rescue had placed the three dogs in foster care while it sought permanent homes for them.

While an earlier report suggested they were seeking a suspect in relation to the incident, a spokesperson for ACT Policing said that was not the case.

“The boy has not been identified (he is not a suspect, as per the false report … which has since been corrected).”

Police do want to speak with a boy in his late teens who was in the area around midday on November 4 and may be able to assist police.

The boy is described as Caucasian in appearance with short brown hair and of a medium build. He was wearing a brown or red t-shirt, dark long pants and carrying a dark backpack.

ACT Policing is urging anyone who has any information about the incident to call Crime Stoppers on 1800 333 000, or report via the website at act.crimestoppers.com.au. Provide reference number 5877800.
Under the Crimes Act 1900 (ACT), a person shall not lay any poison that endangers, or is likely to endanger, the life of any domestic animal or bird. Maximum penalty: $1000, imprisonment for 6 months or both.

An Australian Working Dog Rescue Facebook post calling for assistance had been shared more than 8000 times when we last looked, and commented on 2379 times. It features the image above of the dogs and reads:

“We have had a terrible incident occur in the ACT and wish for the public to know and assist us, the police, and RSPCA inspectors if they have any information that could help.

Three of our dogs in foster care have been baited (poisoned) in a deliberate attack. All the followers of this page will be familiar with. Red Dog, Tanner and Theo, of whom we have lost Red Dog and Tanner. Theo has survived after a very touch and go affair thanks to the quick thinking of our foster carers and the great work of our vets.

If you have any information in regards to sightings of unknown individuals in the area, or if you have heard any information that may lead to the knowledge of, or apprehension of the perpetrator(s) who has committed this vile act, deliberately killing our animals, then please contact S/CST Justin Alexander of Tuggeranong Patrol. Telephone:(02) 6256 7777 quoting Incident number: P1420168 or contact Catherine Croatto, Senior Inspector, RSPCA ACT on (02) 6287 8117.

Please help us get this information out by sharing and commenting (so it shows up in news feeds), both to alert people in the region of this sort of criminal activity going on so they can do more to keep their pets safe, and to help us find the person(s) who have committed this abhorrent act so we can bring them to justice!

Thank you to all in advance from Red Dog and Tanner.”
RIP babies.

Alice Paris - 24 minutes ago
I dont think you understand what is happening here Chris. The Greens and Labor are responsible for the removal of so many mat... View
Bill Gemmell - 59 minutes ago
Alice Paris I think people need to talk to their MLAs and let them know how the feel about various issues. I certainly will b... View
Anne O'Hara - 2 hours ago
The Greens are like a watermelon, green on the outside, red (socialist/communist) on the inside - that is where their true ag... View
News 61

Jodie Nicholls - 28 minutes ago
Craig Nicholls I wish the cat had not been so good at catching mice this week! View
Kim Robson - 1 hour ago
Jenna J Fit heads up View
Darron Marks - 1 hour ago
Seems like a fair request was there anything else above said they wanted an hourly pay rise of $40 up from $37 an hour ? View
Motoring 9

Rob Thomas - 9 hours ago
Floriade? View
Tim White - 9 hours ago
David Perkins you do know that it created jobs and brought millions into our local economy and in some cases kept many small... View
Mark Whithear - 14 hours ago
Nope it’s still on in Canberra. At Red Cedars Motel.... View
News 100

Tim Hutch - 13 hours ago
The best way not to give them your money is to do the speed limit. It's really not that hard. View
Rosie Jennings - 17 hours ago
Better if there were more mobile units to catch speeding tailgaters. This I was towing a truck home today it was so close beh... View
David Brown - 18 hours ago
That is irrelevant. They are set low all across the country for exactly the same reason. $$$$$$ View
Food & Wine 21

ACT Policing has a blunt warning for e-scooter users: be an idiot and you will face the consequences. With e-scooters...
News 61

Leadfoot drivers beware - the ACT's speed detection net is about to be widened with the addition of two new...
News 61

ACT Policing has a blunt warning for e-scooter users: be an idiot and you will face the consequences. With e-scooters...
Opinion 29

@The_RiotACT @The_RiotACT
Without the Bank of Mum and Dad, many young people couldn't buy a house. Zoya Patel asks, are homes really financial success in 2020? https://t.co/Jsp2SyS9Mp (2 hours ago)

@The_RiotACT @The_RiotACT
Canberra music fans are spoilt for choice when it comes to spooky shows and parties to head out to this week https://t.co/lHlf5AKX4o (11 hours ago)

@The_RiotACT @The_RiotACT
Have you ever wanted to run away and join the circus? Belco Arts has a unique opportunity for Canberra's youth to learn some dangerous tricks https://t.co/Xr1M7wv5EG (12 hours ago)