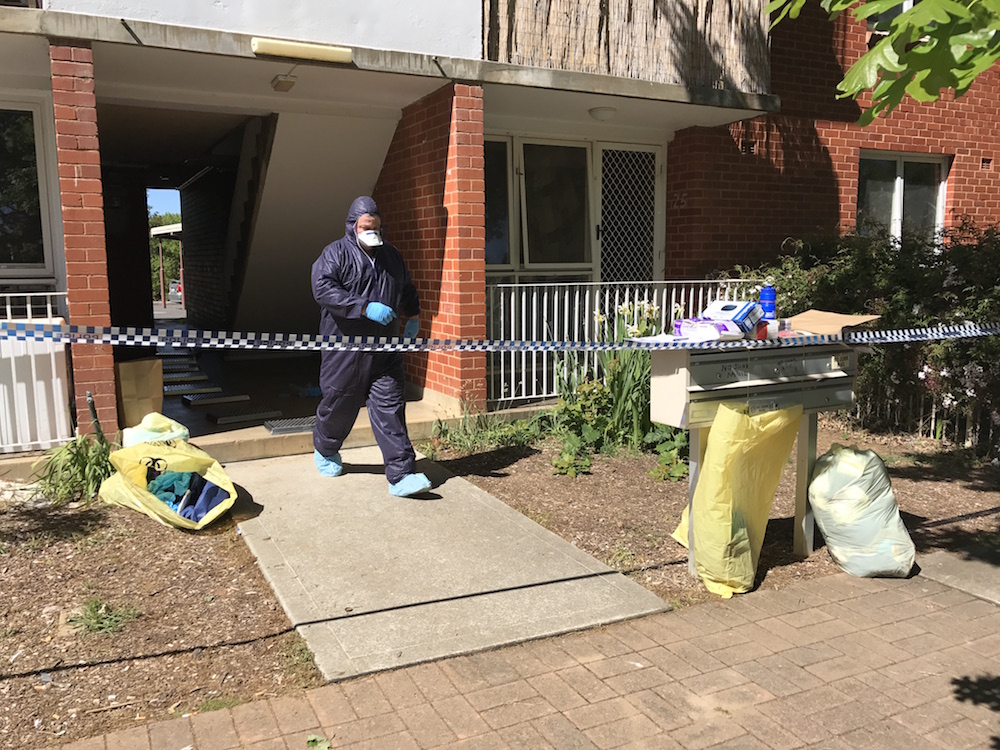 ACT Policing has confirmed the man who died in suspicious circumstances in a Windeyer Street, Watson, unit last night was 37 years old and had suffered a fatal gunshot wound in his own home.

Police believe this to be a targeted incident and say there is no threat to public safety.

Investigations are ongoing and the crime scene will remain in place over the weekend.

Residents of neighbouring units told the RiotACT this morning that they had heard a gunshot shortly before police and emergency services teams arrived at the scene at around 7.45pm last night.

One neighbour was convinced that what they had heard the sound of a gun being fired.

“You couldn’t not hear it,” the neighbour said. 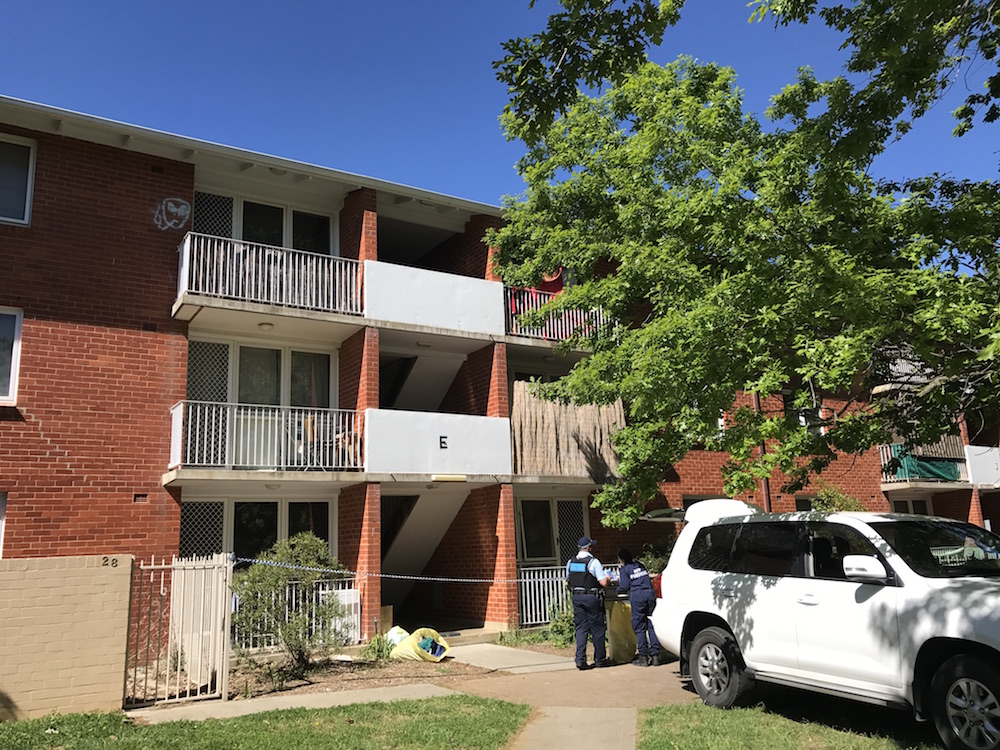 The residents the RiotACT spoke to also commented on a separate aggravated assault that occurred in their complex last month.

Police said late last night that they would as part of their investigation examine whether there was a connection between that incident and last night’s events. 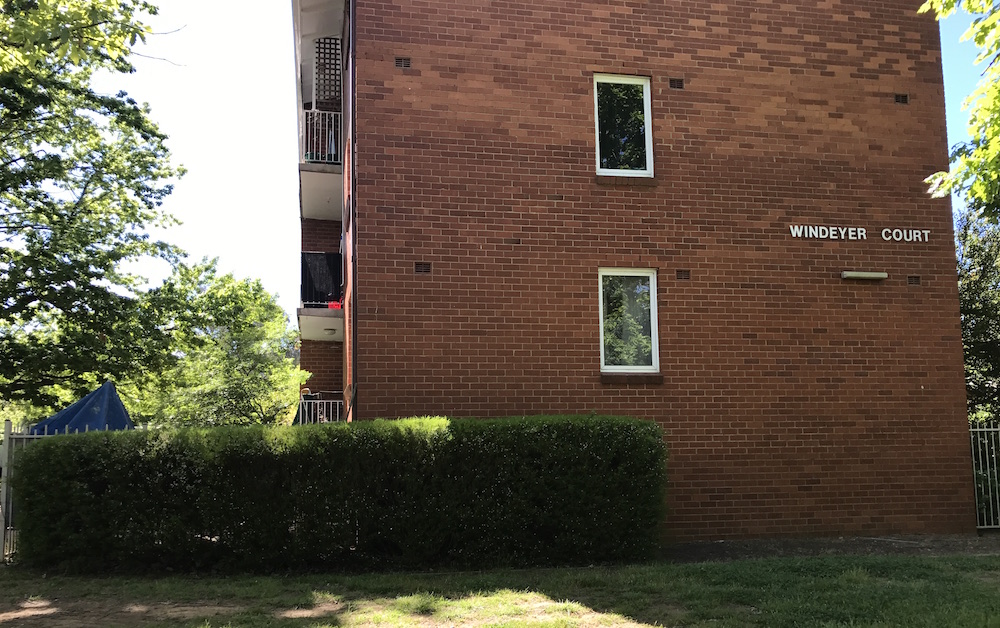 ACT Policing is urging anyone who may have seen or heard anything suspicious near Windeyer Street, Watson last night to contact Crime Stoppers on 1800 333 000, or via act.crimestoppers.com.au. Information can be provided anonymously.

Pictured above are the unit block where the police investigation is underway and an AFP Forensics team member at work on the site. Photos: Charlotte Harper

Fiona Carrick - 5 hours ago
Hi Peter We are singing from the same song sheet. It is time the Government looked after our Town Centres! The Woden Town Cen... View
Community 8

Fiona Carrick - 6 hours ago
Great article Bethany Many people do not see the work volunteers do in the community. I was the president of the Woden Valley... View
Acton - 10 hours ago
A defence of conflutes means being out of touch with the majority of Canberrans who hate the things. Insulting their intellig... View
Opinion 9

Bill Gemmell - 7 hours ago
Jayne Bobby isn't it going to be a burn out pit? View
Jayne Bobby - 15 hours ago
Coolo Park would have been the perfect spot for a beautiful Floriade garden .... hopefully next year 🌹🌷💐🌺🌸🌼... View
News 4

tfx1 - 8 hours ago
A now bankrupt Australian economy and therefore the tax collecting Australian government is being asked to pay additional mon... View
Cary Elliot Johnson - 18 hours ago
Hmmmm. Sounds like a case could be made from the ACT Government and Shared Services who continually under pay penalties and a... View
Best of Canberra 28

Justin Bathurst - 10 hours ago
Have been seeing Kyle now for over a year. He's the only podiatrist I've seen who's taken time to work on the problem in an o... View
Property 1

Nick Swain - 10 hours ago
Mr Georgalis might like to check the extent to which the high rents being sought by some landlords in Kingston are keeping th... View
News 12

Capital Retro - 11 hours ago
I believe that is unprecedented. View
News 4

J D - 11 hours ago
My difficulty with Hare-Clarke is that IF that 'Election ACT' youtube video explanation is accurate, then the 'surplus' is re... View
ACT Election 49

russianafroman - 16 hours ago
Not about making the city "bland". It's about limiting pollution. I don't see how "using their own money" is a valid argument... View
Sport 11

russianafroman - 16 hours ago
In that case, why would you suggest we combine the two? Doesn't sound very fair to the mountain bikers to have their course d... View
Breaking 2

Ol L - 16 hours ago
He will be back when it’s all blown over, a classic politicians tactic View
Community 4

Maya123 - 17 hours ago
Wonderful project. Another project links people with compost, but nowhere to put it (they might live in an apartment for exam... View
News 82

Vandn Vandn - 17 hours ago
No...you merely need to be Tom Hanks or our precious Kylie to enter into Queensland and choose your place of self isolation..... View
show more show less
*Results are based on activity within last 7 days

@The_RiotACT @The_RiotACT
If you've rediscovered birds during COVID-19, what can you do with photos of everything from kookaburras to currawongs? Here's a call for citizens scientists contributions to the Canberra Nature Map https://t.co/yuVF7pnr5D (7 hours ago)

@The_RiotACT @The_RiotACT
Honey, I shrunk the trees: inside the small, but perfectly formed National Bonsai & Penjing Collection at the National Arboretum https://t.co/aMtOnCfrRT (8 hours ago)

@The_RiotACT @The_RiotACT
Canberra’s largest provider of children’s services is freezing its fees for the remainder of 2020 to help families during the COVID-19 pandemic https://t.co/hO225xgSZF (9 hours ago)