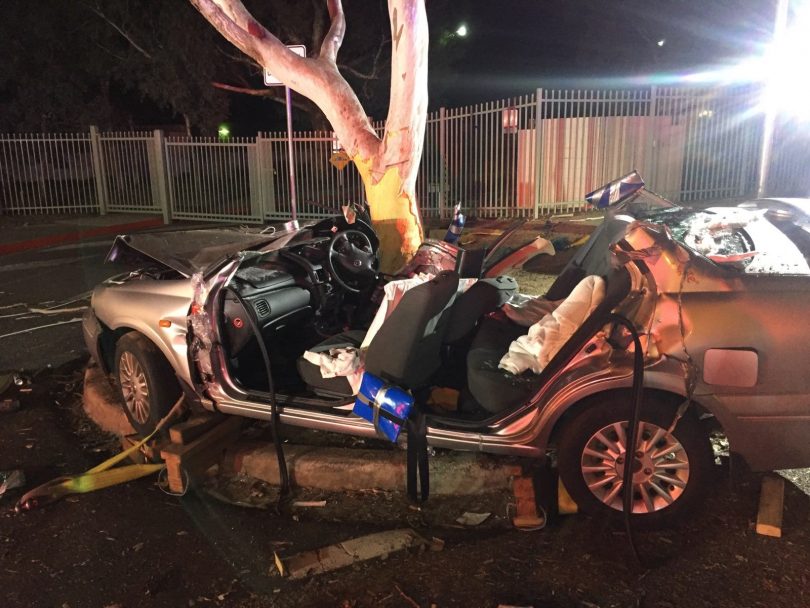 A 17-year-old was taken to hospital in a critical condition on Sunday morning following this horrific crash. Photo: Supplied by ESA ACT.

Police have urged motorists to slow down, following a horror weekend on ACT roads with three serious drink driving and speeding incidents over the weekend.

A 17-year-old driver is in a serious condition in hospital, while two kids under the age of five who are lucky to be alive after their car rolled and another teenager was caught speeding 142 kilometres per hour in an 80 zone.

“I don’t know what more police need to say and how many pleas we have to make to motorists out there, but when you drink and drive, when you speed, there is no excuse,” Detective Sergeant Boorman said.

“I am asking all motorists out there, to take care on the roads and slow down. Speed limits are not negotiable and they are there for a reason.

“Police and emergency services get very frustrated with having to attend these incidences. We see this sort of behaviour fairly regularly, so that comes back to the message of taking care on the roads. You get one chance.

“I have been doing this job for a long time, and the difference between life and death is minimal and sometimes it’s a matter of inches.”

Police said speed was a significant factor in the crash of 17-year-old P-plate driver who collided with a tree in Duffy in the early hours of Sunday morning (7 July).

“Look at this young fellow who is now in hospital after the collision in Duffy, his life will be changed significantly and so will the lives of people around him,” Detective Sergeant Boorman said.

Another 17-year-old was fined $4069 after he was caught speeding 62km per hour over the limit on Horse Park Drive, Harrison on Friday night (5 July). The teenager was riding a motorcycle, which was unregistered and uninsured, travelling 142km/h in an 80km/h zone.

“62 kilometres over the speed limit is not acceptable and will not be tolerated,” Detective Sergeant Boorman said. “That person was dealt with but it’s not about the fines, it’s about correcting behaviour and hopefully by doing that, that person will not end up in the hospital with the other young fellow.”

In another incident, a 31-year-old man rolled the ute he was driving on Piallago Avenue near Canberra Airport, with two children under the age of five in the car. The man later recorded a blood-alcohol reading of 0.212, more than four times the legal limit.

“When you are driving with that sort of alcohol in your system, the impairment is a significant factor,” he said. “That person will have a meeting with a magistrate in the near future.

“Look at the collision with the young children in the car. They were very lucky, and that person is an idiot.”

The ACT roads are massively under policed. This is a political issue that needs to be addressed at a government level. The arrangement of secondment of Federal Police just doesn’t result in sufficient numbers.
As far as ACT driver behaviour is concerned, they are the worst drivers I have encountered in Australia. Way too fast, way too close and a perverse idea that if I drive faster than you, you don’t count as a valid road user. I really enjoy living here as a recent arrival from Melbourne, but this is a serious issue I don’t see will ever be addressed unless a sensible number of operational police are deployed!

You do realise it is the Government who says how many police are a minimum in Canberra and pay for those police?

ACT has the least police per capita and are close to the lowest paid police in Australia. Not the AFPs fault the money isn’t there.

Seems the only way to get the message through is for the Assembly to pass horrific penalties, say mandatory minimum fine $1,000 and minimum three months jail, irrespective of circumstances. Loss of licence for one year. Remove any magistrate’s discretion. No point the police being “frustrated” and “pleading”. This is a government responsibility, not Police’s. If motorists are too stupid to discipline themselves government must impose it in a severe way.

Yes I can understand the frustration suffered by Police. However I never see the Police patrolling in my area of Gungahlin. I only see motorist running red lights or using their phones not to mention speeding.

You need to be more visible through regular patrols at all times.

Louise Earl - 4 hours ago
I love Canberra … but yes.. Canberra has missed the boat on a lot over a lot of years! Not just AFL. View
Matt Bacher - 9 hours ago
Michael Bourke …..as you and I can attest to mate 🤣 View
News 156

Capital Retro - 6 hours ago
Where does CBR get its income from? View
chewy14 - 9 hours ago
JC, There's 4 comments, who's this mythical blue glasses brigade whatever that's supposed to mean? And I can't see where anyo... View
News 25

Capital Retro - 6 hours ago
Now for the wind turbines. View
Dean Okeeffe - 6 hours ago
you'd think with all their planning did territorial birds not factor in. View
Henry Kivimaki - 8 hours ago
Can we train the birds to attack the work cover drones? .. 😏😉... View
News 83

Pat Gagel - 8 hours ago
Maybe not. I have regularly used the service since 1992. Love it. Still the most sophisticated form of travel. Much better th... View
Marco Spaccavento - 8 hours ago
Pat Gagel I’m not a user. 3 a day also hardly justifies a new station… View
Pat Gagel - 8 hours ago
David Malcolm they aren’t a problem. Believe it or not, biggest issue is a grade crossing on a bend between Bungendore and... View
Property 22

Anthony Willing - 8 hours ago
Paul Mills the same as every old / wheelchair person in every multi-storey in every city in the world.The fire brigade have s... View
Anthony Briscoe - 9 hours ago
Canberra more and more of this type of development will happen under the Barr Government. Just wait till the tram goes to Wod... View
Paul Mills - 9 hours ago
Becoming a common Canberra vista. View
News 128

assiduous - 9 hours ago
All voters should look closely at the actions of Federal Liberals prior to and post the royal commission into banking and fin... View
show more show less
*Results are based on activity within last 7 days