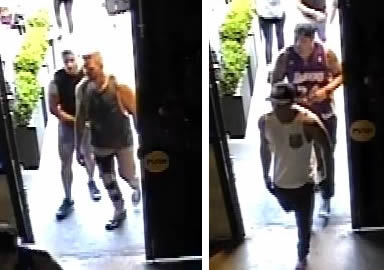 ACT Policing’s Regional Targeting Team is seeking the public’s help in identifying four men who may be able to assist the investigation into a serious assault which occurred in Braddon last weekend (Sunday, November 23).

The men are believed to have attended Hopscotch Bar on Saturday night (22 November) where they were involved in a disturbance.

Two of the men left the bar and were involved in a further disturbance, around 1am, near the corner of Lonsdale and Elouera Streets, resulting in a woman and man being assaulted.

The men were harassing the woman after she asked one of them about his injured leg, as he was wearing a leg brace. Her partner attempted to stop the harassment however was punched repeatedly by the man in the leg brace.

The second offender then assaulted the woman where she fell to the ground.

When police arrived at the scene the male victim was unconscious and bleeding.

The first offender is described as Caucasian in appearance, with blonde hair, wearing a navy blue top and a full leg brace on his right leg.

The second offender is described as Caucasian in appearance, approximately 173cm tall (5’8”), brown hair and wearing a white singlet.

Police are urging anyone who may have witnessed the incident in Braddon or can identify the men in the images to contact Crime Stoppers on 1800 333 000, or via act.crimestoppers.com.au. Information can be provided anonymously.

Andrew Brettargh - 31 minutes ago
Multi story and solar panel the top.. pays for itself.. View
Tom Adam - 3 hours ago
Why won’t they make it multi storey, instead of stealing parklands?? Not a wise investment.... View
Steve Herczeg - 7 hours ago
I've always wondered why there's a statue to celebrate single mothers at the top of the street. View
Property 36

Elroy Jones - 52 minutes ago
If you'd like to live in a rural setting then perhaps consider moving away from the city. View
Property 5