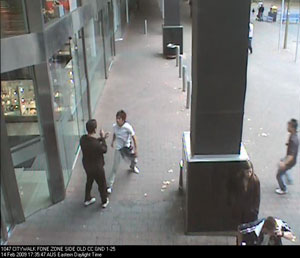 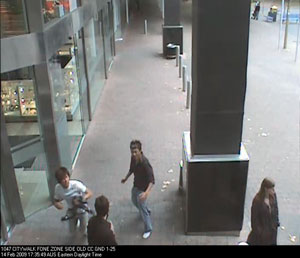 ACT Policing is seeking public assistance to identify a male offender after an assault earlier this year that left one young man with a broken nose and fractured eye socket and a second with a cut lip.

The incident occurred about 5.35pm on Saturday February 14, the weekend of the Multicultural Festival, near the water fountain at the Canberra Centre entrance on Ainslie Avenue in Civic.

He was wearing a white T-shirt and had black hair with bleached blonde tips through it.

There were two other young males with the offender at the time of the incident and police are interested in speaking with either of these men.

Anyone who may be able to identify either of these males is urged to contact Crime Stoppers on 1800 333 000 or via the website at www.act.crimestoppers.com.au

Probably took em that long to figure out how to capture a scene from the CCTV.

Good to see the CCTV system in the city (almost) doing its job and capturing crimes now that theyve fixed it.

Why wait 5 months to ask for help on this?

My thoughts exactly…perhaps it was racially motivated?

You could always ring Crimestoppers and umm leave a msg!

Did you recognise one of them and that’s how you know this? I’m assuming students of Asian appearance attend schools other than the two you mention.

I guess if it looked like a bunch of guys who knew each other fighting, it’d be understandable.

+1
I think it was a sober (booze free that is), one on one affair.
If this was in Sydney there might have been a witness making a statement along the lines of “Chk Chk, Boom!”

I think the fashion police may want to speak to both of them about their hair.

The incident occurred about 5.35pm on Saturday February 14

Another speedy response from the Police? Or did it take that long to realise your nose was broken….

I’d guess the police, as always, are on top of things….

Assault pictures embiggened (courtesy of the AFP Media page and its “click to enlarge link”, try it sometime):
Picture 1
Picture 2

Did you recognise one of them and that’s how you know this? I’m assuming students of Asian appearance attend schools other than the two you mention.

Look at those people just walking past. We’ve become passive. I guess if it looked like a bunch of guys who knew each other fighting, it’d be understandable. But if they’re launching an attack on some random person, it’s a damn shame.

Why wait 5 months to ask for help on this?

Need bigger photos. They must be available.