Detectives from ACT Policing’s Territory Investigations Group are investigating a robbery at the Video Ezy at Ngunnawal Shops on Wanganeen Avenue around 8.57pm yesterday (August 8).

A male wearing a beanie and a black polar-fleece zip-up jumper entered the store and threatened staff with a knife demanding cash. The two staff members complied with the request handing over a sum of cash to the offender before he left the store.

Police would urge anyone who may know the identity of the offender or who may have witnessed suspicious activity around the Ngunnawal Shops yesterday to contact Crime Stoppers. 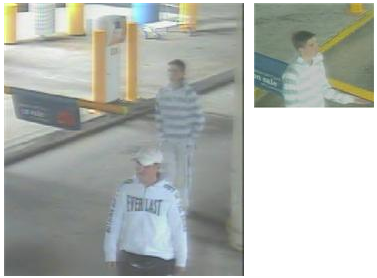 ACT Policing is releasing CCTV vision and still photographs from an attempted aggravated burglary in Macquarie last week in an effort to seek out witnesses to the incident who could assist the investigation.

The closed circuit television (CCTV) footage of the incident shows that around 2.30am on Wednesday (August 5), offenders attempted to reverse a stolen Holden Commodore into the front window of the premises. Their brazen attempt was thwarted however, by steel bollards put in the pedestrian walkway.

Police are seeking to identify this offender

The CCTV vision shows two separate and unsuccessful attempts by the offenders.

During the second attempt, the rear bodywork of the vehicle becomes wedged on a bollard and the offenders flee.

Police believe the same two men had been responsible for the earlier theft of a white Toyota Yaris security vehicle from outside the Queen Elizabeth Family Centre in Carruthers St, Curtin. The stolen Yaris was later recovered in Noala St, Aranda. Property items stolen from the Yaris were later found in the abandoned Commodore.

The co-offenders “captured” on CCTV.

One of the offenders is described as a Caucasian male, around 6’ (183cm) tall, with a solid build, a fair complexion, and brown hair cut short at the sides and long at the back. He was wearing a white hooded jumper branded with “Everlast”, black track pants with white stripes, white sneakers and a white hat.

The second offender is described as a male Caucasian around 5’10” (178cm) tall, with a slim build, a fair complexion, and blond or brown hair cut short at the sides and long at the back. He was wearing a hooded jumper with white and grey horizontal stripes, white track pants with black stripes on the side, and white sneakers.

Police are appealing for any witnesses who may have seen suspicious persons or activity around the Jamison Centre on Wednesday, August 5, or who may be able to help identify either of these men to contact Crime Stoppers.

Pretty clear pictures and obviously not very smart young fellas not realising they would get captured on CCTV at westfield when they went to steal the car. I doubt it shall be long before they’re recognised, they may as well hand themselves in.

…and blond or brown hair cut short at the sides and long at the back.

Call a mullet a mullet, I say.

The one in stripes looks a bit like Trent from Punchy!

Matthew Soall - 28 minutes ago
Maybe ANU should be more focused on teaching students then running the place like a business. View
Capital Retro - 1 hour ago
The alarm bells are ringing now: https://www.abc.net.au/news/2021-04-23/anu-unveils-162-million-budget-deficit-due-to-covid-1... View
David Hennessy - 2 hours ago
Can’t imagine this ending other than positive View
Opinion 63

Peter Brierley - 30 minutes ago
If I have to follow ALL the rules to drive my car (on the road) then why are these SAME rules not applied to ALL other road u... View
nerdfrenzy - 1 hour ago
I use a scooter to commute to and from work everyday. I'm always aware of people sharing the bike paths that I use. I do find... View
Jaeme Ogilvie - 1 hour ago
Escooter owners are not a problem as rule, I think its super important they are not grouped in here. Unfortunately there seem... View
News 5

saphael7 - 46 minutes ago
Does this mean that domestic violence is going to be brought to the park frequented by small children? View
Community 1

Esmeralda - 1 hour ago
You're asking the wrong questions. The idea that you have to take from the poor to give to the poor is outdated and just wron... View
Food & Wine 49

Naoko Lamb - 3 hours ago
Very tasty soup, noodle and chashu. The service was quick and friendly and the atmosphere of the shop was vibrant and welcomi... View
News 4

Brisal - 3 hours ago
Then you stop and fix it. It isn't difficult. View
News 15

Neville Mercer - 3 hours ago
Wasnt the Center cinema part of the Academy Twin Cinema group at Paddington? View
Shayne Borger - 13 hours ago
Jorge Gatica na just someone who doesnt appreciate architecture or heritage....probably a developer who like the council want... View
Lifestyle 28

Darron Marks - 5 hours ago
Yeah we are still waiting for the cinema in Gungahlin as well. Covid is the reason supposedly hasn't stopped construction on... View
News 26

chewy14 - 14 hours ago
Capital Retro, Except all evidence at present is to the contrary. The only large scale batteries connected to the grid are ma... View
Opinion 8

Brian Evans - 15 hours ago
I live in an Enrico house and it is, day to day a wonderful experience. View
show more show less
*Results are based on activity within last 7 days

To many, she is known as 'Mumma Mary', the queen of the road, or even the truck driving instructor in...
Opinion 85

The company behind a proposal to construct and develop a new hard rock quarry near Royalla has made its intentions...
Courts & Crime 0

Builders in the ACT are struggling to get materials to complete jobs, with construction grinding to a halt in what...
*Results are based on activity within last 7 days

Have you seen Layla? – FOUND

Have you seen Shane Fish? – FOUND

@The_RiotACT @The_RiotACT
The Gang Gang Café may be tucked away at #Downer shops, but its musician owners are making a splash https://t.co/RRXY5ACYgx (14 minutes ago)

@The_RiotACT @The_RiotACT
Can you help police identify this man? He was taken to hospital by ambulance from the Gungahlin Town Centre on 30 March 2021 and says his name is 'Roger' https://t.co/eaRqBkQco8 (1 hour ago)

@The_RiotACT @The_RiotACT
#Bombala locals will have to travel hours to see a doctor when their only medical practice closes https://t.co/DCTDLXCyuh (1 hour ago)