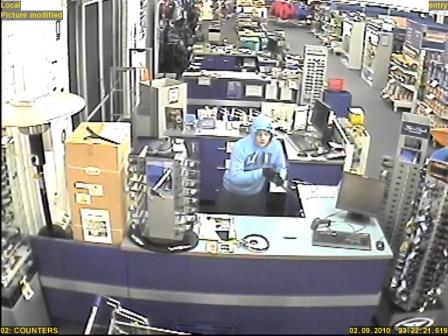 ACT Policing has released images of a burglary which occurred at the BCF store in Fyshwick on Thursday (September 2).

About 11.25pm, offenders entered the store and escaped with a number of stolen items including Boat Fish Finder GPSs, Waeco fridges, sleeping bags and various reels and rods.

Police believe five males were involved in the burglary. All men were believed to be wearing gloves and hoods to cover their faces.

One of the men was wearing a grey hooded top with a picture on the front, black tracksuit pants withy three white stripes down the side, white shoes and a white baseball cap with a black rim.

A second man was wearing a dark blue hooded top, a black baseball cap, black tracksuit pants with white stripes down the side and orange gloves.

The fourth man a black hooded jumper with white writing on it, green gloves, black tracksuit pants with three white stripes down the side, a yellow/green T-shirt and white shoes.

Due to the size and amount of items stolen, it is likely the offenders used a large vehicle to transport the stolen goods.

Police ask anyone who may have information to contact Crime Stoppers on 1800 333 000 or through www.act.crimestoppers.com.au.

“That’s not living, this is living”. Lol, nice header JB

I like the police speak “All men were believed to be wearing gloves and hoods to cover their faces.”

Surely they either were or they werent. Is it really a matter of ‘belief’?

It can be hard to determine from video if ALL offenders were wearing gloves, dtc. They possibly were speculating off the assumption that no fingerprints were found, therefore “believe”.

Reckon if it was my haul I’d be somewhere in SA or WA by now, driving up to NW WA to unload the stuff on the isolated beaches south of Broome. But it’s unlikely these hoodies would have that foresight and will probably do time for this… sorry I mean get suspended ACT time for this.

I like the police speak “All men were believed to be wearing gloves and hoods to cover their faces.”

Surely they either were or they werent. Is it really a matter of ‘belief’?

No idea what they stole, but there are plenty of rods that go for over $300 and reel for up to $1000, so it could be an ‘good’ haul. However, it does sound like a weekend at the coast, or starting up a fishing charter business.

Watching the video of this on WIN News, the thing which struck me was how bright and clear it is. Did they have every light in the place on?

Would be nice if we had the video to look at on this site. Surprised it’s not on the Crime Stoppers site if no where else…

Looks a lot like a boy not a man. Baby blue hoody.

Watching the video of this on WIN News, the thing which struck me was how bright and clear it is. Did they have every light in the place on?

Iaian Ross - 22 minutes ago
Time Thief is more impressive at night than during the day. Seriously. View
Business 2

Peta-Rene Prior - 1 hour ago
All kids should go to boarding schools?? Perhaps get all kids attending school to start with. View
Stas Idowu - 2 hours ago
Synergy Group View
Lifestyle 8

Cary Elliot Johnson - 3 hours ago
Claire Lee Koo because its a democracy with varying opinions on an open column. View
Elizabeth Jones - 3 hours ago
I saw the petition but it wasn't clear it was supposed to be a few fenced playgrounds per region. I know being in an older pa... View
Nat Thomas - 5 hours ago
Megan Munro it’s definitely going to help everyone, it should have been done a long time ago. I hope the gates have fences! View
News 3

chrisJ - 4 hours ago
It is good to hear that new public toilets are included at Kaleen and Duffy. None of the 11 centres listed for an upgrade are... View
Public Sector 5

kenbehrens - 4 hours ago
Isn't bringing forward future infrustructure builds going to create a construction vacuum down the track? The other issue of... View
shannos - 4 hours ago
Exactly, investors chasing capital gains and creating a self -sustaining ponzi growth model at the expense of our younger gen... View
shannos - 4 hours ago
Too much emphasis on infrastructure and construction which is cyclic transient employment relying on developers growth model.... View
Lifestyle 11

Jenny Drenkhahn - 5 hours ago
not to mention changes further South in the Bega Valley Shire; rebuilding in Cobargo and Tathra, Twyford Hall in Merimbula ;... View
News 18

Clarence Beale - 6 hours ago
Hi Myra, so so sorry to hear about this. They will definitely look after you with a refund or a credit. If they haven’t alr... View
Community 43

@the_riotact @The_RiotACT
#Apprenticeship growth in the ACT is the slowest in the country, and the Opposition and #industry leaders are calling on the Barr Government to do more https://t.co/VOy53VsEdS (1 hour ago)

@the_riotact @The_RiotACT
A Canberra creative team appeared on ABC TV's @GruenHQ for the fourth time last week, convincing #Australia that all kids should go to #boarding school, with the slogan ‘We’re all better when they’re boarding’. Here's how they went https://t.co/v2nlG9mSZg (3 hours ago)