ACT Policing is seeking witnesses to an aggravated robbery that occurred at a Giralang service station May 25, 2009.

A man entered the Mobile service station on Canopus Street about 8.00pm and demanded money, threatening the console operator with a knife before making off with an amount of cash and cigarettes a short time later. The console operator was not injured during the incident.

Members of the ACT Policing Specialist Response and Security dog unit and AFP Forensic Services attended and examined the scene, whilst General Duties members conducted a door knock of the surrounding area. Detectives from the Territory Investigations Group are investigating the incident.

The man is described as 19-25 years of age, islander in appearance with light brown skin and a heavy build, approximately 175 – 180cm in height (5’9”-5’11”) and wearing a light coloured jumper with a hood covering his face.

ACT Policing has recovered the final three of seven firearms stolen during the burglary of a Wanniassa residence on May 14.

Police recovered four of the registered firearms the day following the burglary (May 15) after a search warrant was executed on a Wanniassa home. Three juvenile males were taken in to custody following the search.

The remaining three firearms were surrendered to police about 7.30pm on Saturday night (May 23) after a further suspect was identified.

A 17-year-old male was arrested and will appear before the ACT Children’s Court this morning, charged with aggravated burglary and theft. 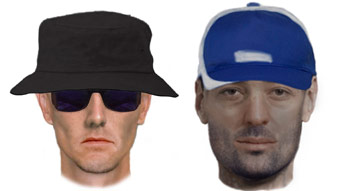 ACT Policing has released facefits of two offenders and still images from CCTV footage of the aggravated robbery which occurred at the Red Hill Pharmacy on Friday, May 15.

Police received notice of the incident, around 1.13pm on May 15, via an activated alarm at the Duyfken Place shop. On attending police were told two men had entered the premises and held up the store with an umbrella and what appeared to be either scissors or a syringe.

One of the offenders restrained a staff member while a sum of money and prescription drugs were stolen. The offenders then fled the pharmacy in a blue Suzuki Swift sedan and headed toward Griffith.

Both offenders are described as Caucasian, aged between 30-40 years, between 5’7” to 5’11” (170 to 180cms) tall, with thin builds, and unshaven faces. They were both wearing grey jackets – one hooded – and sunglasses. One offender wore a black hat while the other was wearing a blue and white baseball cap.

Police are urging anyone who may have seen persons matching these images or may have seen any suspicious activity in the area of the offence to contact Crime Stoppers. 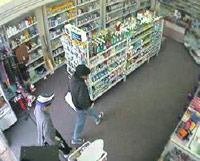 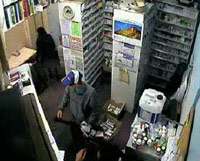 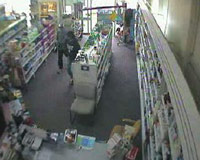 4. Rider down in Wanniassa:

ACT Policing is investigating a single vehicle collision this afternoon that has resulted in the death of a male motorcycle rider.

About 4.50pm emergency services were called to the collision on Ashley Drive near the Erindale Shops where a motorcycle had crashed into a pole. The male rider was unable to be revived and died at the scene.

ACT Policing’s Collision Investigation and Reconstruction Team are on site and are investigating the incident.

Anyone with information which may assist police with their investigations is urged to contact Crime Stoppers.

The pictures from the show why ceiling mounted security cameras are useless.

A person has lost their life. A horrible and very insensitive thing to say.

My sympathies to his family and friends.

+1. As a motorbike rider and a compassionate Canberren, I find the the comment was tactless, tasteless and insensitive.

A person has lost their life. A horrible and very insensitive thing to say.

My sympathies to his family and friends.

You are a complete d*ickhead mate. Kindly keep your thoughts to yourself in future!

For your information you small minded idiot, Dennis was a very experienced bike rider. And yes even the most experienced riders can and do have accidents!

Dennis was a work colleague of mine! He will be sadly missed around our office.

I am sure that the man’s family and friends appreciate your kind words and sympathetic attitude.

Wow, you can hold up a store with an umbrella these days…

In the current environment, a damp tissue might be better than a siringe too.

Looks like Peter Garrett has been at it again.

6:30pm, and all the traffic on erindale drive was backed up to the..sulwood roundabout..

They missed the report of the child outside Lake Tuggeranong College who disagreed about his expulsion, at lunch time with the knife.

Are you able to give anymore detail on this?

Wanniassa wasn’t the place to be today. With that fatality at the Erindale Drive end & a serious accident at the Athllon Drive end (this one was almost a fatality, with the Intensive Care Ambulance being sent to this accident & all southbound traffic on Athllon Drive was diverted through Wanniassa & Forlonge Street & Taverner Street. But I am unable to give full details as I can only go by what I saw & what I say could be misleading).

No the first time for Giralang Servo. I was held up there in 93 by three youths late at night. Never caught those kids by the way.

Oh wow. I live like 20 metres away from the giralang servo…

They missed the report of the child outside Lake Tuggeranong College who disagreed about his expulsion, at lunch time with the knife.

Les Eite - 12 minutes ago
Driving coarse for everyone. Most of drivers don’t look past there car bonnets I was trained to look as far as you can and... View
Alex Petrow - 10 hours ago
Easy Purgy!! Double the speed limit. Because you will be on the road for half the time, the window for prangs is also halved!... View
Roderick Saunders - 10 hours ago
Kirsty Noad Canberra's had the log book assessment system for years. I think you only needed 20 hrs with an accredited drivin... View
Opinion 93

Julie Macklin - 4 hours ago
Linda Stapleton I rode to work in the rain. I had wet weather gear to wear. Well, I did until into my 50s. Then I began to ta... View
Stephen Harris - 7 hours ago
Julian Hayes thenif it increases their costs but not their profits then they will stop doing what they are doing and do it di... View
Nicky Goose - 21 hours ago
Flexible work hours are a fabulous idea and frankly in a modern society and economy why we don’t push them more is beyond m... View
Food & Wine 3

Dawn Head - 9 hours ago
So glad that Downer is having a life again. We left there 20years ago and lived opposite the park, not far from the scout hal... View
Community 2

Jade Barges - 11 hours ago
Such a pretty Church 💗 View
Janet Ilchef - 23 hours ago
I remember seeing Canon Buckle swinging beams into place. And the bells at St John’s in Reid were given by Lord de L’Isle... View
Motoring 32

Martyn Tweedie - 20 hours ago
So you're an exception. Nice to be able to afford all that. Sounds like the problem is affordable housing and rent, not the w... View
Patrick J Pentony - 21 hours ago
They will have a great view of those new massive powerlines View
Marko Lehikoinen - 21 hours ago
Martyn Tweedie we have 3 cars now, needing a 4th and in few years will need a 5th one. When kids can't afford to move out and... View
News 13

54-11 - 2 days ago
Can anyone tell me how many times this year the Raiders have led at half time, and then lost the game? The same stats for the... View
show more show less
*Results are based on activity within last 7 days

@The_RiotACT @The_RiotACT
Canberra is riot of colour in autumn but did you know that wasn't always the case? https://t.co/KLZuUAdSjj (11 hours ago)

@The_RiotACT @The_RiotACT
@Uber_Australia's incentives to create a zero-emissions fleet have been welcomed by the ACT Government. However, one Canberra Uber driver says there won't be a rush to make the change https://t.co/YTlCJk2R12 (13 hours ago)