Over the weekend and Australia Day its been car burnings, aggravated robberies and assault, what a way to celebrate.

There were 4 vehicles found burnt out southside (presumably stolen). So if you get back from the coast and find your car gone, I wouldn’t hold much hopes for it sorry.

3 more repeat drink drivers were pulled over a caught again over the weekend. One caught whilst, “Around 1am on Saturday (January 23), Belconnen patrol members apprehended a male in an unregistered, uninsured speedway car on Starke Street, in Holt. The vehicle had no bonnet or boot panels, two flat tyres and welded doors.”

Police are asking for help with a sexual assault case occuring in Glebe Park. “The 22-year-old victim had met a male at the front of Mooseheads bar in London Circuit around closing time, and had agreed for the male to walk her home.”

Mugging at an ATM in Fyshwick. “One of the offenders had a black curly mullet hairstyle approximately 30cm in length at the back.” Quelle Surprise.

Motorbike stolen in mugging in Calwell. Watch out for anyone wearing a white hooded jumper as they seem to be all the rage for lowlifes.

An the Tuggies Thugees are back, this time in Gordon where 5 of them jumped out and mugged someone walking along. They must be so proud of themselves.

Lastly a face-fit of of the fake Kambah cops from back in December has been released. Anyone know him? 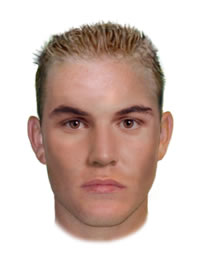 If you have any info on these incidents please contact Crime Stoppers on 1800 333 000, or via the Crime Stoppers website at www.act.crimestoppers.com.au.