1. Bingle on Macarthur and Miller, again:

ACT Policing is seeking witnesses to a collision which occurred in O’Connor last night (Sunday September 5).

About 6.10pm Police were called to a collision at the intersection of Macarthur Avenue and Miller Street, O’Connor. The collision involved 2 vehicles with one driver being taken to Calvary Hospital with chest and leg injuries.

Police would like to speak with anyone who may have seen either vehicle in the minutes leading up to the collision or who may be able to assist with the investigation to contact Crime Stoppers on 1800 333 000, or via the Crime Stoppers website on www.act.crimestoppers.com.au. Information may be provided anonymously. 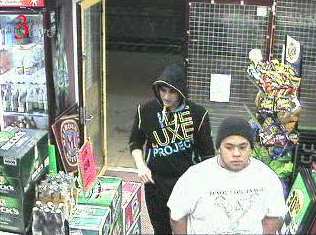 2. Anyone recognise these turds?

ACT Policing is seeking witnesses to an aggravated robbery which occurred at the Curtin Liquor Legends on Saturday July 31.

About 8.50pm two males entered the store, with one male going to the spirits section while the second male went into the cool room. The second male returned with two cases of beer and as he was walking toward the counter has dropped one of the cases. The staff member went to assist when he was punched four times to the head by the second male. Both males then ran from the store.

The first male is described as being in his early 20s, about 180cm (5’11”) tall, with short hair and a slim build. He was wearing a black hooded jumper with a multi coloured logo on the front and black tracksuit pants with three white stripes down the leg.

The second male is described as Islander in appearance, about 180cm (5’11”) tall, with a stocky build. He was wearing a white coloured short sleeve shirt, black tracksuit pants and a black coloured beanie.

Anyone who may be able to assist police with the investigation are asked to contact Crime Stoppers on 1800 333 000, or via the Crime Stoppers website on www.act.crimestoppers.com.au. Information may be provided anonymously. 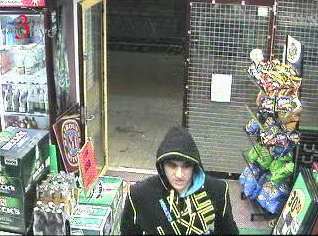 Two Queanbeyan women have been extradited to face the ACT Magistrates Court on charges of affray following a disturbance at an apartment in Belconnen early on Sunday morning.

Police will allege that the two women, both aged 19, were in company with an 18-year-old Symonston woman – who is currently before the court – and between four to five alleged male offenders who forced their way into a Chandler St, Belconnen apartment around 3am yesterday.

There were seven people in the apartment – four males and three females – when the home invasion occurred. A fight took place between the two groups, in which several people sustained injuries. The four male victims left the apartment prior to police attending.

A 20-year-old man Narrabundah man later self-presented to The Canberra Hospital with stab wounds to his abdomen and police are investigating his involvement in the incident.

A woman was arrested in Symonston and appeared in court this morning. Police investigators then sought the assistance of NSW Police for the arrest of the two of her Queanbeyan associates. Extradition to the ACT was then sought and granted.

Police are still seeking witnesses who many have seen or heard a disturbance in Chandler St, Belconnen, around 3am yesterday. Anyone with information which could assist the police is urged to contact Crime Stoppers.

ACT Policing is investigating a pursuit that occurred on Sunday evening involving a vehicle travelling at high speed on Northbourne Avenue.

Around 11.12pm, NSW Police commenced a pursuit of white Holden Commodore bearing ACT registration on the Federal Highway. A short time later the pursuit was terminated. The vehicle was sighted by an ACT policing patrol in the Dickson area and a pursuit was initiated along Northbourne Avenue. The vehicle continued along the Barton Highway and then onto the Tuggeranong Parkway.

Road spikes were deployed and were successful in deflating one of the vehicle’s tyres. Police continued to pursue the vehicle until the pursuit was terminated at the Sulwood Drive and Drakeford Drive intersection.

A short time later, police located the abandoned vehicle at a service station in Kambah. The vehicle has been seized for forensic examination.

Police are appealing for any witnesses who may have seen the white Commodore or witnessed the pursuit to contact Crime Stoppers.

In a separate incident ACT Policing arrested a 20 year-old man in relation to a number of traffic offences on Sunday morning.

About 5.25am police were advised by a member of the public of a vehicle driving erratically in Greenway. Police will allege that the vehicle ran two sets of red lights before stopping in Jigger Place, Isabella Plains. The male driver returned a positive roadside screening test of 0.112 and was taken to the Tuggeranong Police Station. At the station the man refused to provide a sample of his breath.

The man was taken to the ACT Watch House where he was charged with fail to stop, refuse to provide a breath sample and drive in a manner dangerous. The man will appear in the Magistrates Court at a later date.

It’s about time we re-named the Police Wrap as “Hoodywatch”.

Canberra needs it’s own version of the star chamber.

What low-rent scumbags, the Curtin two. They also look a bit gay – here’s hoping they get to express their man-love in the AMC soon.

Yeah, it’s a definite haven for the criminally minded.

Going by Canberra’s record they will either:

a) not get found
b) get found and be underage and get off
c) get found, get off and proceed to further more cowardly crimes.

God I love the Nations Capital

Great photo’s of two utter cowards. Let’s hope that these scum are picked up quickly – and let’s then hope that the punishment fits the crime.

Ian McLeod - 39 minutes ago
Jeff Smith I see your point but I don't think planners expected the Brindabellas to become such a valuable resource for menta... View
Jeff Smith - 43 minutes ago
I used to hold the same views, but then I realised that Not building across the river is just an artificial barrier. CMAG has... View
Ian McLeod - 4 hours ago
We absolutely should not build across the river right up to the Brindabellas either as certain politicians have been pushing... View
Property 15

assiduous - 1 hour ago
Low lending standards and inflated bonuses for originating mortgages based on ever rising values are core features of our ban... View
Pradeep Bishwakarma - 2 hours ago
Crazy market Shiva Sapkota! Only the RBA Can fix this View
Rebekkah Patton - 3 hours ago
Jamie Patton the price 😱 View
Community 13

HiddenDragon - 5 hours ago
Another case study of the incompetence and impracticality of this government. Consumed with the big picture, feel good, sound... View
Capital Retro - 13 hours ago
Oh, the perils of virtue signaling. It would be hilarious (like an episode of Yes Minister) if it didn't mean this will cost... View
Opinion 79

Julie Macklin - 10 hours ago
I cycled and rarely had to face the parking problems people complained about. When it rained I took the bus, even though I ha... View
Maya123 - 10 hours ago
We had flexitime and we had clocks, do there was no way someone could cheat on their hours. Whether the individual actually w... View
Julian Hayes - 10 hours ago
Because I've seen the truth employers simply make their employee's work a 12 hour shift as its still within not having to pay... View
Opinion 1

ChrisinTurner - 11 hours ago
When did the Stanhope plan expect this expansion to be finished? 5 years ago? View
News 12

chewy14 - 15 hours ago
I think it's unfair that people who work more years than I do, in jobs that pay more than mine does, end up having more money... View
Community 53

A huge family home in Florey has sold at auction for $1.6 million, setting a record for the Belconnen suburb....
Opinion 86

@The_RiotACT @The_RiotACT
Can your boss tell you what to wear at work? This week's poll asks whether common sense about workwear is actually all that common. And readers say the government should rev up our motorsports facilities https://t.co/DoNwT3GgIB (3 hours ago)