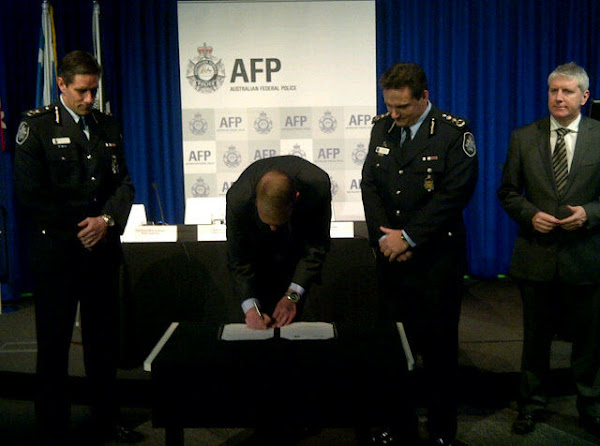 Simon Corbell has proudly announced he’s signed a five year deal for the Australian Federal Police to continue their watch over Canberra.

“This is an important agreement between the ACT and Commonwealth Governments and one that ensures that Canberrans have access to top quality policing through the Australian Federal Police,” Mr Corbell said.

“This agreement has worked very well since 1999 when AFP started providing policing services to the ACT community, and I am pleased that I am able to sign this agreement and continue it for another five years.”

The 2011-2012 Purchase Agreement details 32 key performance indicators and outlines the nature and cost of police services $140 million that will be provided to the ACT through the AFP.

“Some of the key areas of focus in the new agreement include property crime, liquor industry reforms, road safety as well as indigenous affairs and working with those in the community with a mental illness,” Mr Corbell said.

Simon was so happy with the agreement he even tweeted a picture of the signing.

The 2011-12 purchasing agreement is now online.

Debbie Crane - 40 minutes ago
Elroy Jones too old for that now. View
Elroy Jones - 7 hours ago
If you'd like to live in a rural setting then perhaps consider moving away from the city. View
Motoring 21

Ken Chau - 2 hours ago
Why Dickson?! How about O’Connor or Ainslie? View
Alex Elliott - 5 hours ago
How can Braddon and Dickson get $14 million combined and the single bus depot building get $6.5 million. I'd like to see how... View
News 25

chewy14 - 3 hours ago
I really wish that people would stop quoting the 400+ number of deaths in custody as if it means anything or signifies some s... View
News 5

chewy14 - 3 hours ago
How is it deception for you to be offerred a short term deal which has been honoured exactly as required? Did you sign a long... View
HiddenDragon - 6 hours ago
”The second recommendation is that retailers should have to tell their customers if they have a plan that could reduce a cu... View
show more show less
*Results are based on activity within last 7 days