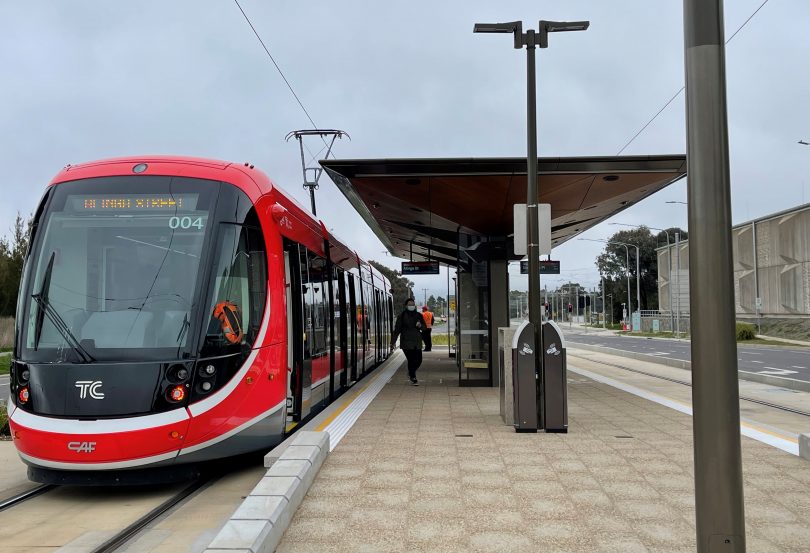 The 2021 ACT budget includes funding for the next stages of light rail. Photo: John Mikita.

Plenty of you agreed: Sharon Cornthwaite wrote “As a regional passenger, I already have to take a 4-hour bus trip to Canberra to catch the train to Sydney. The timetable is very limited, and an upgrade would be most welcome”, while Ian Barndt wrote “and ‘down the track’ perhaps commuter services via light rail to Bungendore, Michelago and beyond, with stops at Jerrabomberra, Googong, Hume, and connections into the Tuggeranong valley.”

This week’s poll asked Do we need a new railway station in the city centre? 1667 readers voted. Your choices were No, that train has gone and it’s no longer a relevant idea. This received 34 per cent of the total, or 568 votes. Alternatively, you could vote Yes, it would need investment but I’d catch the train for sure. This was the winner, with 66 per cent of the total, or 1099 votes.

This week, our attention is focused on the ACT budget, delayed by COVID-19, but delivered last week.

The ACT Government unveiled a $5 billion pipeline of infrastructure projects, describing it as the largest program in the history of the ACT public sector.

“We will be pumping hundreds of millions of dollars into the ACT economy over the coming years to support, create and protect thousands of good, secure local jobs in the public sector, the private sector and the community sector,” he said.

“Interest rates are the lowest since federation, providing a once-in-a-century opportunity for the Government to build sustainable, productivity-improving and growth-enabling infrastructure to prepare our city for the future.”

There is $1.4 billion for the ACT’s transport system, including the first light rail stop for stage two of light rail to Woden, design and construction of the Sulwood Drive shared path and the duplication of William Hovell Drive, as well as upgrades to roads and paths and improvements to active travel routes across Canberra, in addition to the Canberra Hospital expansion, light rail stage 2A to Commonwealth Park and CIT Woden.

Where did all the money come from amid soaring pandemic costs? The ACT Budget shows a 3.75 per cent average increase in residential rates for both units and houses, but rises will vary widely across the Territory depending on the type, size and location of the property.

READ ALSO: ACT Budget: Your rates and what you will pay

But Jazzy Dhooria wrote “A new hospital in tuggers would be amazing! It’s got a little economy of its own”, while Ted Oxenham wrote perhaps tongue in cheek, “I’m angry because rates are going up and at the source it all is really just my fear of change.”

In this week’s poll, we’re wondering whether the Government got the settings right.

One Response to Probing the polls: a new railway station and a budget for hard times
Filter
Show all comments
Showing only Website comments
Show only Facebook comments

The pursuit of madness by expanding a tram unsupported by an adequate cost-benefit analysis will lead us all into terminal despair.

Ab Fabco - 57 minutes ago
Robyn Holder You will be waiting a while for sensible responses. This entitled bunch of parent don't seem to understand peopl... View
Elle Apopei - 4 hours ago
This is a great idea! And I have seen examples of fenced playgrounds that still incorporate nature and beauty without feeling... View
Elle Apopei - 4 hours ago
Rebecca Willis View
News 5

T - 2 hours ago
It would be great if they could legalise medical marijuana for people as an alternative to pain management medications and to... View
poorman - 2 hours ago
Please read https://www.forbes.com/sites/mikeadams/2018/03/28/california-officials-say-marijuana-legalization-causing-more-vi... View
chewy14 - 6 hours ago
Hmmm, I wonder how the government could remove "organised crime" from the equation of selling these drugs? It's almost like i... View
News 3

@the_riotact @The_RiotACT
The @WNBL #draw has been released and, as Tim Gavel writes, there's a lot for @UCCapitals #fans to get excited about https://t.co/EV8vf94L2J (51 minutes ago)