Probing the polls: an even split on the app, and do visa holders deserve our support? 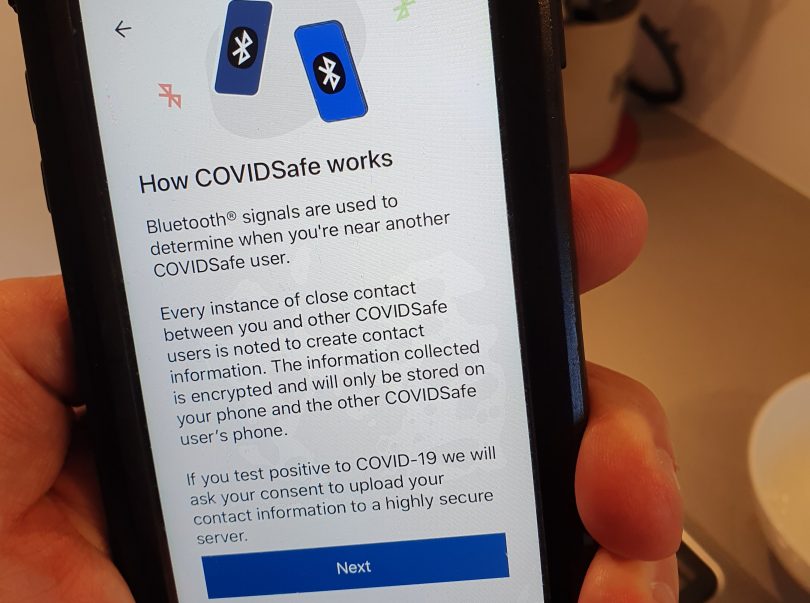 The app’s now been launched and details about how it will work are clearer.

COVIDSafe will trace every person with the app who has been in contact with someone else using the app who has tested positive for coronavirus in the previous few weeks. The intention is to automate contact tracing, and the Australian Government argues that doing so will allow restrictions to be eased more quickly.

The app is accessible from the Apple App store or Google Play store or from covidsafe.gov.au. You’ll be asked to register your name (or pseudonym), age range, postcode and phone number.

That information will be stored encrypted on a government server. Using Bluetooth, the app records anyone you get close to (within 1.5 metres) for 15 minutes or more who also has the app. The two apps exchange anonymised IDs which cycle every two hours and are stored encrypted on phones and deleted after 21 days.

The app records the name you choose to provide, your age range, your phone number and your postcode, information about your encrypted user ID, information about testing positive for coronavirus, and then the contact IDs should you consent to that being uploaded.

The data will be held by the federal government on an Amazon Web Services server in Australia and the Government says that only state health authorities can access it. Legislation will be introduced into Parliament in May to ensure this.

Proponents of the app argue that most of us are already tracked to some degree by social media and other stored informaton via our banking, frequent flier points, shopping habits and entertainment purchases.

But there are also concerns about whether the Federal Government will store and use the data, and readers were evenly divided on the question of whether we can trust their intentions beyond the immediate crisis.

Our question this week was: The Federal Government wants 40 per cent of us to sign up for a COVID-19 tracing app. Will you download it? 1063 people voted on the poll.

This week we’re asking about whether government should extend their support to visa holders and international students.

Australia has the second-largest temporary migrant workforce in the world, with 2.17 million people on temporary visas. They’re currently excluded from stimulus and support measures.

But Suzanne says “The visa holder I employ pays the same taxes as everyone else so she should be entitled to support just like the others”.

Our question this week…

I was good with the app till I realised it doesn’t actually work properly on 40% of Australian phones.

Somebody forgot to ask the geeks the exact, literal, question, “Um, does this app work on iPhones, if it’s not kept in the foreground?”

I'm not comfortable sharing my personal information and other stuff with bloody Amazon. They already know more about me than anyone, why should I give them an even better option? Plus if the USA government wanted the info they could force Amazon to give it away. After that all bets are off as to where it'll end up. 🤨🙄

Carole Ford I strongly suggest you read your Facebook T&Cs

I downloaded it but keeping my Bluetooth on burns through my battery in about an hour so I have to turn it off... 🤦‍♀️

I wish there was a tin foil hat emoji

Download a safe app and share information the government already knows about you (and which only the ACT Gov can access) because it helps the pathway out or ... put lives at risk and maybe kill people. Tough choice this one 🤔

Craig Pope Well, to begin with I’d like to see the source code before I decide to download it or not.

Craig Pope just another app to run your battery flat.

Ben Johnston - 1 hour ago
"In a 50-minute ministerial statement this morning (22 June), Business Minister Tara Cheyne told the Legislative Assembly tha... View
Lewis P Owlay - 4 hours ago
Worked a treat View
HiddenDragon - 8 hours ago
Unless there's a strong likelihood that the scheme will be re-run, with a somewhat larger budget next time, it might be bette... View
Community 52

Jason Richards - 7 hours ago
How about tougher laws on the fruit bats riding three wide on unbroken lines... View
Ol L - 8 hours ago
Stupid. Increasing fines won’t stop anything. Look at the near annual fine increases for speeding. View
James Forge - 9 hours ago
Grant Rixon I'm not saying that. I'm against cyclists flouting the current law by not slowing town to... View
Property 3

sammo1 - 9 hours ago
It almost already is! Most of the population work and shop in Canberra or Queanbeyan. Its really not that far out.. It seems... View
consumeradvocatecanberra - 12 hours ago
Hmm, what a great place for a satellite city for Queanbeyan or even Canberra (thinking Oaks Estate-perhaps not workable) but... View
MERC600 - 13 hours ago
It's been quite a while since I wandered into the Captains Flat local. Back then they were only using one corner of the place... View
Food & Wine 5

Julie Macklin - 12 hours ago
Flannelette shirt. That's all I have known them called and what I have always called them. Never hard of the other words befo... View
show more show less
*Results are based on activity within last 7 days

Probing the polls: supporting visa holders and getting back on the footy field

@The_RiotACT @The_RiotACT
ARIA award-winning superstars, multi-state indie supergroups and local legends - oh my! All that and more in this week's #GigGuide https://t.co/eFn9yY4gw0 (3 hours ago)

@The_RiotACT @The_RiotACT
Indian Myna birds have been declared a pest species by the ACT Government due to their environmental and health impacts. It's part of an effort to reduce the population of the invasive species in the Territory https://t.co/BAb0ctQyAl (4 hours ago)

@The_RiotACT @The_RiotACT
The Canberra Region @TruffleFest is more than a celebration of Tuber melanosporum, it highlights the best food and wine the region has to offer. Here are some events you won't want to miss https://t.co/zaKealFux0 (6 hours ago)