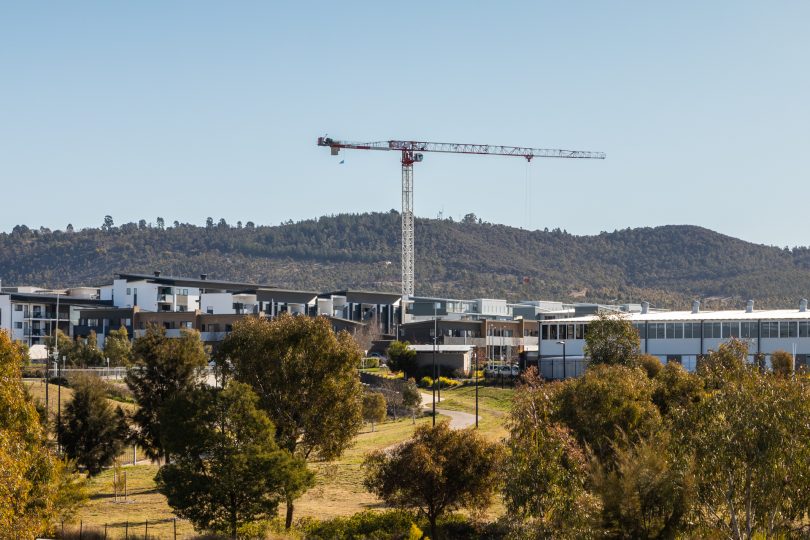 As COVID-19 restrictions ease for the first time in about two years, will you be heading back to the office?

As the Opposition argues that getting people back into offices would revive the economy and revitalise our city and town centres, Chief Minister Andrew Barr says that boat has sailed.

He’s arguing that we all need to adjust to people working at least partially from home, noting that in any case many of the empty offices belong to the Commonwealth, not the ACT Public Service.

We asked: Do we need to go back to full-time work in the office?

1086 readers participated. Your choices were to vote No, the pandemic has changed our work habits for good. That received 735 votes, or 68 per cent of the total vote. Alternatively, you could vote Yes, it’s time to move on and revive small business too. This received 32 per cent of the total, or 351 votes.

This week, we’re wondering whether more land supply is the answer to the ACT’s housing price pressures?

Critics say the ACT Government is to blame for the housing affordability problem because it’s not releasing enough land and last week, in the Assembly, Liberals spokesperson for planning Peter Cain used the ballot for land in Macnamara as an example.

12,300 registrations were received for only 71 blocks of land and Mr Cain argued the speed at which the government supplies new land impacts the ACT’s “skyrocketing median house price”.

But Chief Minister Andrew Barr pointed out that the release of new land constitutes less than two per cent of the total housing market, so it could not possibly affect the price of houses in established suburbs in inner Canberra or even Belconnen.

The executive director of the Housing Industry Association (HIA) in the ACT, Greg Weller, said both sides have a point. While new homes are only a small part of the market, Mr Weller doesn’t believe the government is distributing land in a way that is helping to control accelerating prices.

At the heart of the argument is a long-running debate about infill versus greenfield development.

George Watling wrote: “We also need to note recent Australian research has demonstrated that housing prices go up with densification not down. So building high density micro-block suburbs and urban infilling our existing suburbs won’t bring house prices down either.

“We need to make it easier for people to move and work in regional towns and centres that have room to expand like Wagga Wagga and Goulburn”.

Kimberley Lloyd said: “Any land release should not be open to investors. Stop going on about first-time buyers and think about those who have been kicked out and had to sell and need to get back into the market. All those who have outgrown their current home.

“You only need the one home for your family and they are making it far too hard. Apartment life is not for everyone and some people need the space. It’s not unusual to have multiple generations under one roof for care reasons. With the median house prices being what they are, quality of life in Canberra has taken a nose dive.”

A major factor driving up housing prices in the ACT his own government’s parasitic and opportunistic behaviour when it comes land prices and the hand over of land development to private sector firms. In 2018 it was reveal that ACT government’s land sales profits have risen almost four-fold in just four years, leading a former senior Treasury official to question the policy behind the change. If the government was serious about addressing over-the-top house prices they would take land development away from the developers and hand it back to professional town planners who could deliver new land releases at cost price (as they did before the ACT Land Development Agency was replaces with the very toxic Suburban Land Agency)
https://www.canberratimes.com.au/story/6014812/act-land-sales-classic-monopolistic-behaviour-to-maximise-revenue/

Yes it’s crystal clear that expensive housing is a deliberate ACT Labor Greens policy choice. They have been at it for 10 years now. It puts the lie to their policy platform objectives of equity & equality. They have no shame.

But Suburban Land Agency will release land then most of the land will just go to the developers and builders then builder will sell to buyer as package with huge prices.. How does help that?

Too simplistic. We need more public housing or at least fixed rent housing to make it easier for low income people to survive in ACT.

It’s a very simplistic answer to avoid the hard political decisions that need to be made at the federal level. The ACT could not release enough land to make a big difference and half of the land will be investors. Also land is a limited resource especially in the ACT. Releasing more now without fixing the issue, just means eventually it will get even worse.

The answer is for a huge increase in building government houses. All sizes and types. Rent out according to income. Real estate agents have made fortunes and for what?

Margaret Freemantle as a furniture removalist we do a lot of government house moves and some people trash them and once they are in government housing you can’t kick them out. It also spoils it for the people that really need government housing because the government give them to the wrong people. I know a couple she is on a pension and he works but they still on pay 105 dollars per week because it’s comes out of her pension while he brings in $1,100 per week so clearly they need to revalue who they give a house to.

Margaret Freemantle The local Labor – Greens government makes money off investors from all the cash that comes in the form of land tax and they also don’t have to deal with the maintenance on those properties. The government has no real interested in running the property market.

What’s the point of more land. All the builders and rich people get them. There is no fair way with the process to buy a land for average families.

Salima Haidary yes currently investors and existing owners can get the land and developers like Capital Airport Group will just sit on it and wait for it to appreciate. There is a way to stop this but i need your support – https://epetitions.act.gov.au/CurrentEPetitions.aspx

Supply and Demand.
Economics AO1.
But those who own houses see the obscene price rises as a good thing.

On the other side of this question, will not releasing and not opening new land drive down prices? I think the answer is pretty obvious.

Housing needs to stop being seen as an attractive investment vehicle. We’ve argued for years to stop it, nothings changed, so why will it now?

The land being released is shocking though! $350,000 for tiny blocks? How does that help anyone?

Shalini Nestor I was told it helps other home owners in other suburbs properties to go up in value.
But agree the block prices of new land releases are insane and small.
In WA I CAN BUY A 4X2X2 aircon and fully landscaped for $400,000…. or $600,000 for ocean views.

It’s a shakedown Shalini, a lump sum tax you have the privilege of paying bank interest on. Tell the ACT government it’s not good enough by supporting this e-petition… https://epetitions.act.gov.au/CurrentEPetition.aspx?PetId=214&lIndex=-1

Supply and demand is a simple equation. Increasing supply will help, obviously.
But why is demand always increasing? Why does the government have a policy of increasing Canberra’s population indefinitely? It’s not sustainable!

Martin Budden You can’t stop people moving here. Even in some fairyland where you could, this would simply drive up prices even further because you would be creating artificial scarcity.

The single largest contributor to the increase in demand is investors. Like the quote in the article says “You only need the one home for your family”. Every investor in the market is competing with someone wanting to buy their own home.

Let’s start prioritising the needs of those who want to buy a home to live in, over the wants of those trying to use housing to make a profit through capital gains.

Jarryd Moore I agree with your point about investors and the need to prioritise those buying to move in.

While it’s true that we can’t stop people moving here (nor should we try), the current government actively encourages people to move here, just to get a bigger slice of the GST pie. It’s an unsustainable policy.

Jarryd Moore So can you explain where all the renters will live if no investors around. You can currently see what is happening with the lack of investors in Canberra, it costs a bomb to rent anywhere

Every house bought by an investor is a house that could have been bought by an owner-occupier who has now has to rent a house back from an investor that didn’t actually need it in the first place.

Jarryd Moore Would you agree that all government housing are rentals. Nice amount of them to be sold then.

Martin Budden Decreasing supply helps Labor Developer donors, mandating over 90% of new land for apartments helps Union labor make more money than stand alone houses, convince people that there is a shortage and they will line up to pay whatever you ask for , ‘fear of missing out’… its a giant ponzi scheme with each new entrant thinking they will some day sell for much more to some new sucker….

It is about time the building industry got into the 21st Century and began using high technology design and materials to make prebuilt houses that are worth living in and are affordable. Not rocket science!