Frustration is growing in West Belconnen with claims the government is dragging its feet on the proposed Kippax Centre redevelopment.

The community is waiting on the Environment, Planning and Sustainable Development Directorate to provide a timeframe for the tender process for the rezoned open space land provided through Draft Variation 361 to the Territory Plan.

The Belconnen Community Council has been pressing the Directorate for action after delays caused by the government’s decision in July to opt for a tender process instead of direct sale to a preferred party and the October elections.

But according to a flyer sent to residences, the Directorate has asked the community for patience as it continues to conduct site inspections and other work.

Belconnen Community Council chair Glen Hyde said the Directorate had also rejected an invitation to attend next week’s council meeting at which Kippax Fair owners will present their updated design to the community.

The Directorate believed it would be inappropriate to attend a meeting where a potential tenderer would be making a presentation.

Mr Hyde said that the new design process had whittled down more than two dozen issues to just a handful, and the council supported these plans being presented to the community before the tender process.

He said the owners had hoped for a direct sale process but believed the government had gone for a tender process in the interests of openness and transparency and not precluding a better outcome.

But Mr Hyde said the Christodoulou family had developed and operated the centre for 40 years, were part of the community and remained committed to the centre expansion.

“We’ve seen how that [tenders] works in other jurisdictions and it always ends up very messy,” Mr Hyde said.

With pressures building on the ageing centre as Ginninderry is built and infill developments proceed, the urgent need for a bigger and modern centre was clear, he said.

Increasing population was putting extra strain on the centre and parking and accessibility problems were growing every day, Mr Hyde said

“Our grave concern is with the service precinct as part of the group centre, which needs to be upgraded desperately,” he said.

Mr Hyde said not much had changed since the ’80s when the centre was built to service about 16,000 people.

“We just need to be make sure that whatever we do through this process we’re planning for the next 40, 50 years so we don’t get ourselves back in this position.”

Mr Hyde said the centre expansion had been on the table since 2014 and he wanted the project to be shovel ready by 2022.

DV361 had recommended the centre expanding east across some of the sports fields prompting protests about the loss of green space.

Mr Hyde said the council had been clear that whatever space was lost would have to be compensated for elsewhere.

He said the centre owners had offered to remediate, irrigate and light the unused nearby ovals 6, 7 and 8.

“We see that as a good way to demonstrate good faith with the community,” Mr Hyde said.

The council’s next General Meeting will take place at Raiders Belconnen on Tuesday 16 March from 7 pm.

So now the plan is out the window and the whole thing up for tender, so we have no idea what the new proposal will look like? I am so confused by this government’s handling of something that should be so elementary 😕

They could keep the oval as an oval….

I hadn’t even been informed that this was a done deal, what about all the submissions that opposed the expansion in it’s current design? Do we not have any say in the future of our lical region? I only just found out about this meeting 2 hours after it started too, where were the notifications? Have the government and their developer mates just gone ahead as they usually do, ignoring sensible feedback from the community? Any little bit of faith I had in local government and democracy has now gone, they are all scum who are just in it for themselves.

Since this story went out I can confirm a representative from the Directorate will attend the meeting tonight to field questions on investigation work being carried out at the site (consistent with the flyer they distributed to local residents). Those of you who have commented on the article please come along tonight and get the next chapter in this story, you are most welcome to attend

Build up, not out! They could easily have a multi level car park. Better yet, have better public transport options, better buses and light rail.
The argument of there will be more people also stands for green space, where with these extra ppl play with their children, walk their dogs, play sports? Not the upgraded Higgins oval, it’s too small! Where will the magpies, galahs, plovers, ibis, willy wagtails, currawongs, sulphur crested cockatoos, red rumpled grass parrots and others nest and feed?
People and animals need green spaces!

Melissa, please come along tonight and hear the proposal. There are answers to your questions and there is an opportunity to provide your thoughts on why you believe up rather than out (and why the master plan limits heights)

Ah forgotten and neglected Belco, as a Tuggers resident I sympathize; must be hard.

I went along to most of the BCC community consultations about Kippax prior to the master plan being finished and the turnout was quite low at most meetings. After the master plan was done and the community consultation period was supposed to be over there was another BCC meeting that was crowded with people angry about the things in the master plan. I think it would be much easier to keep everyone happy if people were less reactionary and gave their feedback or ideas beforehand when there many opportunities to do so.

Woody Brenden I’ve been to the meetings and made submissions. Haven’t had replies to anything. Was later told that the submissions where put on a wall for anyone who was interested in reading them could – what a joke

I also had lots of questions and have had not one reply to any. I’ve pointed out serious problems with their design from things such as non-compliance with standards and going against government’s own policies, but not one explanation on how they will get around these issues. Aaargh…it’s a brick wall, why do we bother banging our heads against it.😡

Richard Willcoxson well if the tram made a stop there they’d fix it in a flash.

Stephen Mee no doubt. Safe labor seat so no need to make improvements

Richard Willcoxson same where we are. Safe labour, but libs in power. Complain nothing being done, but vote against changes that would see action taken, then blame incumbents that not doing enough.

Least they have some functioning shops, don’t even get me started on the Giralang saga.

Something needs to be done soon. It’s getting impossible to get a park there at busy times now. The center is in dire need of an upgrade and way more parking

I suspect this is a tricky issue, and the govt needs to work out a better approach to working with commercial property owners in this space. I dont know what the answer is, but some sort of standard drafted in consultation with them would be a good start

This shopping centre is what Jamison to be. Tired and in desperate need of renovations…

Laura you shouldnt demonize people you don't know. The application was denied by ACAT because the… View 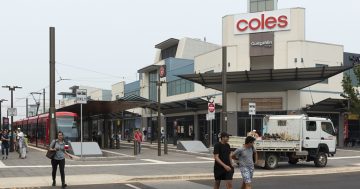