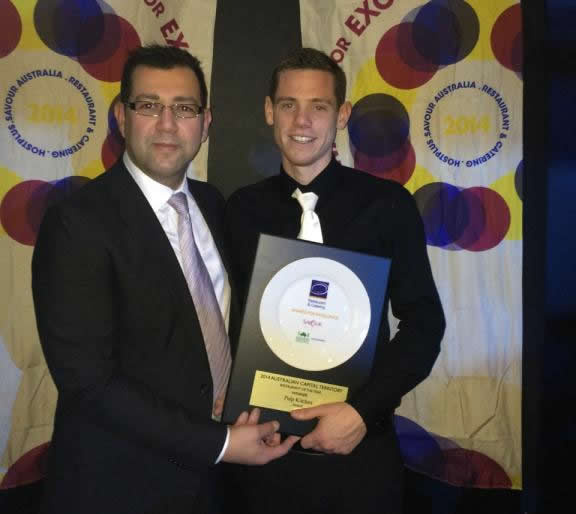 Reputable for being the most objective awards systems in the world – the Savour Australia Restaurant & Catering HOSTPLUS Awards for Excellence 2014 series kicked off at 6:30pm in Canberra last night.

Almost 70 local caterers and restaurant and café operators were judged across 28 categories for the ceremony held at Hotel Realm in Barton.

The major award winners that took home a plate included: 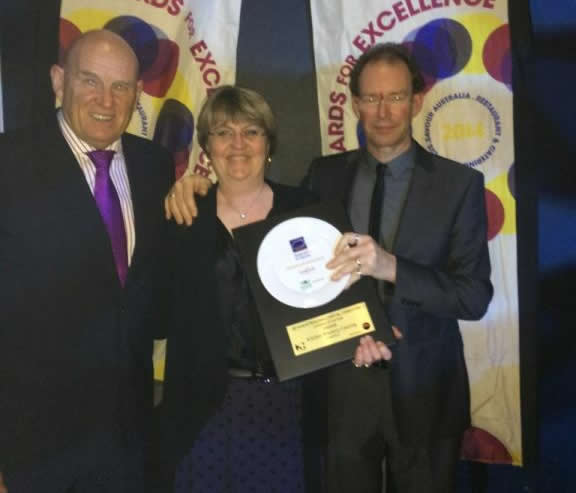 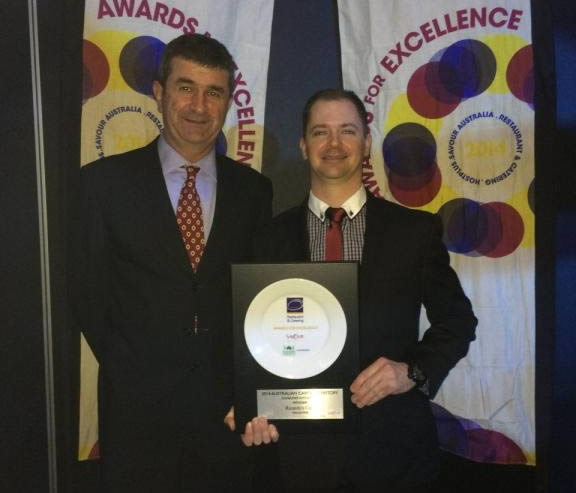 Restaurant & Catering CEO John Hart congratulates all of the winners, especially Kitchen Witchery Catering and Ricardo’s Cafe, which went home with numerous plates to demonstrate professionalism and excellence in their field.

“The winners should be proud that they have excelled in a rigorous system, where nothing goes unnoticed – a big congratulations to Kitchen Witchery Catering and Ricardo’s Café which wowed the judged in two categories,” said Mr Hart.

“The Awards for Excellence look at the entire dining experience, rather than a single food or service dimension,” said Ms McGhie.

The winning businesses will now compete at the National Savour AustraliaTM Restaurant & Catering HOSTPLUS Awards for Excellence to be held at Peninsula Docklands on Monday 27th October 2014.

Through a new partnership with Melbourne Food and Wine, the night of nights will bring attendees the freshest and finest Victorian produce and prized wine to support the Put Victoria on Your Table campaign.

R&CA CEO John Hart says in addition to the traditional categories, the national event will also see a new and exciting focus on training, development and social media.

“Whilst the George Mure Memorial Professional Development Award is designed to encourage and recognise excellence in training in the workplace – the Innovative Workplace Training Award will reward innovative approaches to the skills development of staff.

“The Social Media Award – also new this year – will award the business with the most Facebook and/or Twitter likes – which is an important step to help encourage the upskilling of the industry,” said Mr Hart.

I love their food, they’re professional and friendly – but their coffee is awful!

And BYO, I love you guys!

Congrats to Nathan and Daniel and the whole crew. It was a big gamble but worth every bit.

For those foodies out there, get along and see and taste for yourself. Great food, good wines, great service, with an authentic French/Italian influence moderated by the Aussie drive for excellence.

Bev Lamb - 21 minutes ago
We had it in Melbourne and many suburbs definitely shaken but not stirred. View
Helen Topor - 1 hour ago
Krystyna Topor a friend thought she was fainting (she was standing at the time). I thought that the shaking might be the begi... View
Anne Barnes - 2 hours ago
While house shook in Shingle Hill Way Gundaroo View
News 5

CaptainSpiff - 35 minutes ago
Nailed it. Please let sanity return.... View
Brisal - 54 minutes ago
I'm not sure what extra restrictions would have been realistically tough enough beyond "everyone stay home and non-essential... View
Feedback - 2 hours ago
‘Mr Barr defended the government’s approach, saying there were too many caveats to be able to predict what restrictions w... View
News 107

Jack Nick - 43 minutes ago
Leave it where it is but yes please upgrade it. Would be fantastic to see the trans run out here along with regular bus route... View
Matthew Maguire - 1 hour ago
We will see a similar post to this in 5 years, 10 years and so on. Like the Very fast train, nothing will happen. It never do... View
Michelle Gilbey - 2 hours ago
Rail from CBR to Yass then to SYD/MEL View
Opinion 15

Annie Wyer - 2 hours ago
Jesse Mahoney I tried growing a whole lot in Belconnen around my complex and they faced east, they all got powdery mildew, th... View
Jesse Mahoney - 3 hours ago
Annie Wyer I'm a post graduate trained forester with many years experience on a technical level, I know a bit about trees. Cr... View
Opinion 191

Deborah Love-Hawke - 2 hours ago
BRING IT ONNNNNNNN 🏁🏆🍾👟🇦🇺 View
John Gregory Free - 3 hours ago
I have been involved in Motorsport for three generations and wholeheartedly support a race of this significance in Canberra i... View
Mark Hannigan - 3 hours ago
Never happen while Barr is there View
show more show less
*Results are based on activity within last 7 days

Speculation around a potential return to Canberra of the Supercars, operating in a circuit around Exhibition Park, has raised the...
News 107

Did anybody seriously believe that the ACT lockdown would not be extended this week, with cases oscillating between the mid-teens...
Breaking 79

@The_RiotACT @The_RiotACT
Increasing numbers of #businesses are receiving notices from the ATO regarding #tax debts. For some, it may be time to make important decisions about whether the business can remain profitable https://t.co/OrAFRf0JBF (31 minutes ago)

@The_RiotACT @The_RiotACT
As part of Region Media, Riotact delivers news, views and information free to more than 700,000 unique readers every month. We've grown up with Canberra and now we are celebrating with a sleek new look https://t.co/kLK4zpxPwK (1 hour ago)

@The_RiotACT @The_RiotACT
Chief Minister Andrew Barr said modelling shows #hospitalisations and deaths will increase as jurisdictions begin to reopen, even when the 70 and 80 per cent fully #vaccinated thresholds outlined in the national plan are met https://t.co/XLk2fmaq5q (3 hours ago)