Pure Zen pod bath like floating on a cloud 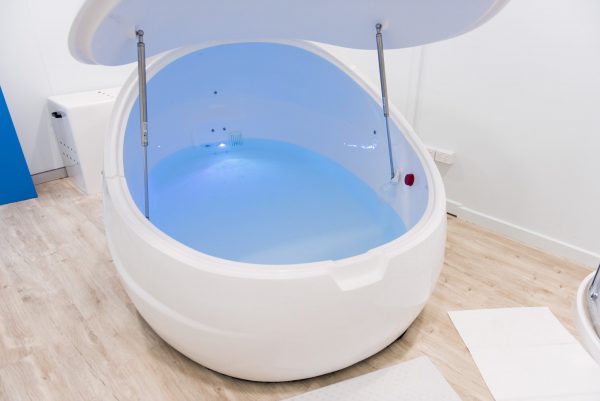 Ever wondered how it would feel to float on a cloud? Me too. Last Saturday, while bobbing about in a Dream Pod at Pure Zen Flotation in Phillip, I reckon I came about as close as you can get.

Yes, while many of you were indulging in a feast of chocolate eggs over the weekend, I was climbing inside a giant, entirely sugar-free egg filled with 600 litres of water and 500kg of Epsom salts for a relaxing float.

The owners of Pure Zen invited a RiotACT writer to come in and try their newly opened facility, and I was lucky enough to get the gig. The invitation couldn’t have come at a better time as I was struggling with my first ever sugar-free Easter, having signed up for the Sweet Poison quit plan on January 1 this year. I needed an Easter treat, and they don’t come much better than this.

Having heard about flotation tanks, I couldn’t imagine a scenario where it wouldn’t be heavenly, and it was. As I stretched out in the tank, a vision came to mind of drifting along in a cumulus cloud. Of course, the whole experience was no doubt much warmer than if it actually took place high in the sky given the air and water temperature in the flotation room are set to around the same level as human skin. 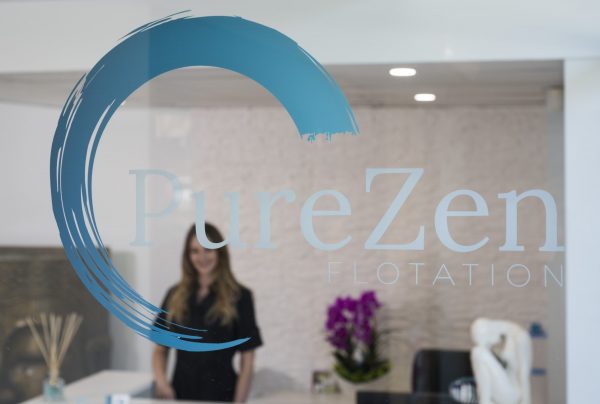 Pure Zen is a new player in the relaxation business in Canberra. Owners David and Stacey told me they’d only been open for a few days, but when I peeked inside the visitors’ book in the chill out room after my float, there were already several notes from happy customers.

“Wow! Now I know what a bath toy feels like,” one guest wrote.

A woman who had given her husband a float as a gift said he came back “glowing, happy, relaxed” and told her it was the best gift/experience ever (“and trust me, I’m the queen of gift giving,” she wrote). Despite being scared at first, she decided to give it a go herself given he’d enjoyed it so much.

“I just loved loved it,” she wrote afterwards. “I felt like an ice [cube] melting and it was awesome.”

Another convert described it as a wonderful and much needed experience at a traumatic time – she had just been diagnosed with cancer and said the “relaxing me-time” in the Dream Pod was a relief after a tense few weeks.

“Me-time” came up several times in these handwritten notes, including one from young woman for whom the visit was a first escape from new motherhood 11 weeks in. She described it as mesmerising. 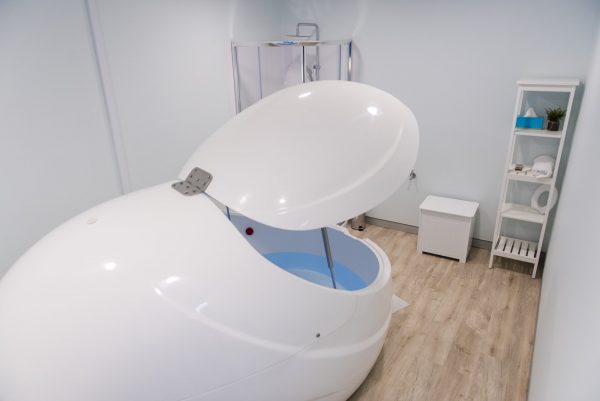 A peaceful hour of floating would be the ideal interlude for someone going through those exhausting first few weeks of parenthood. To pop in a pair of ear plugs and float around in a peaceful state would be ideal after all those nights of sleep interrupted by a crying newborn. The same would apply to those caught up in any highly stressful or traumatic experience, though just about anyone could use some more time in their life to relax, cocooned away from interruptions, noise and stress.

Immersion in or interaction with water in many forms, from spas, saunas and steam rooms to swimming pools, rivers and the surf, calms me every time. Here, the floating and the sensory deprivation complement the hydrotherapy factor.

It was all a bit new and exciting (and fun!), though, for me to be able to entirely chill out (“what happens if I spin myself around so my head is at the other end of the Pod, what about if I lie on my side, or my tummy, this way or that way, or splash, or try not to float, or try some Pilates stretches”, you get the idea), but I found my mind clearing as time went on, allowing priorities to make their way to centre stage so that I could make long-awaited decisions about plans in coming days, weeks and months. I can report that I have taken some big steps in the days following, making real progress after much procrastination previously.

I gather that the meditative aspects of flotation come more easily with each subsequent visit, so that after three or four you’re gaining real benefits on that front.

I mostly stuck to the recommended flotation routine (as outlined during the iPad video first timers watch on arrival) during my visit: a shower beforehand, ear plugs in, stepping into the tank, naked, then a few minutes listening to the standard (and very relaxing) music as a calming display of coloured light helped me to unwind, then darkness for 45 minutes before the music started up again, stepping out and taking another shower to rinse off the salts. My only rookie error was leaving my contact lenses in: next time I’ll bring a case and take them out so that I’m not pondering whether they’re getting stuck to my eyes while I chill in the dark.

I had three fears going into the experience: that I might fall asleep and wake up with a fright having “fallen in”, that I might find it claustrophobic, and that I might feel just plain silly. Having tried it, I can’t imagine a scenario under which you would “fall in”. In water that salty, the human body remains steadily in position once you’ve settled into the right relaxed pose. I used the optional head rest and at no time felt concerned about this original fear.

The claustrophobia issue did come up, but in a small way. I was completely fine until near the end, when I had a sense that I’d like to open the pod up to let some air flow through. Stacey told me afterwards that some people prefer to float with the lid open, and I would recommend that idea to anyone who is concerned about being in a confined space. I’ll try it for the first and last few minutes of my next visit, and will also bring some of my own music on a thumb drive. Stacey also mentioned that float soundtracks to encourage customers to beat addictions like smoking are coming soon.

As for feeling silly, well, let’s face it, floating is the sort of thing that Patsy and Edina from Absolutely Fabulous would do, with Saffy looking on shaking her head, but it’s probably exactly the sort of calming activity the outrageous pair need.

I went to Pure Zen for a float session last week and loved it. I was worried about feeling claustrophobic, but the total darkness and not being able to touch the pod walls helped a lot. I lost track of time, and while I didn’t feel like I got into a meditative state, I came home feeling super relaxed.

The dressing room also has the new fancy (and quiet!) Dyson hair dryers. I didn’t expect that to be a highlight, but it rounded off the experience nicely.

Alex Warne - 2 hours ago
Jarrod Sean Id suggest looking into the Spire Project. There’s lots of money being spent upgrading Canberra Hospital View
Juliane Samara - 3 hours ago
Jarrod Sean if they waited until the hospital was over run, and then decided to build the temp hospital, lives would have bee... View
Jane Stubbs - 7 hours ago
Money well spent.... View
Business 16

Tom Adam - 4 hours ago
*Riot-Act Rubs Hands *Canberra cries at the loss of the last printed journalism available as all other magazines and newslett... View
HiddenDragon - 6 hours ago
"If the printing presses are mothballed, the rationale for maintaining a large commercial building in a central location woul... View
Lindsay Noone - 8 hours ago
Julia can you get some goss? View
What's On 7

George Watling - 5 hours ago
Will Andrew Barr's relentless war with nature never stop. 40,000 trees have been cut down and dozens of our green spaces have... View
News 44

Maria Greene - 6 hours ago
Frank Valzano yeah but how would Brendan or pollies benefit? View
Frank Valzano - 7 hours ago
Use the money to provide mental health support for current and former soldiers suffering from PTSD.😡 View
Lifestyle 2

Liz Widdicombe - 7 hours ago
If these guys were on during the week I would go back to listening to 104.7 for sure. View
Barbara Mobbs - 9 hours ago
Love you guys! All about the Community we live in 😊 View
Food & Wine 21

Sue Thurley - 11 hours ago
Was Martin Smith in that team? View
News 19

Marea Fatseas - 14 hours ago
Lynn Stape we should be looking at how to avoid organics going in with all other waste in the red lid bins in the first place... View
show more show less
*Results are based on activity within last 7 days

@The_RiotACT @The_RiotACT
Looking for a new pet? This cute little guinea pig called Boris is at @rspcaact waiting for the perfect owner https://t.co/BxdD2QOjpl (5 hours ago)

@The_RiotACT @The_RiotACT
This 1950s weatherboard cottage in Ainslie has been tastefully extended & renovated and the character-filled home will go to auction later this month https://t.co/sWB6szyN5J (6 hours ago)

@The_RiotACT @The_RiotACT
Chief Minister Andrew Barr has called for an overhaul of the Commonwealth's Disaster Recovery Funding Arrangements which he says are no longer adequate https://t.co/jOpAlSGfaE (7 hours ago)