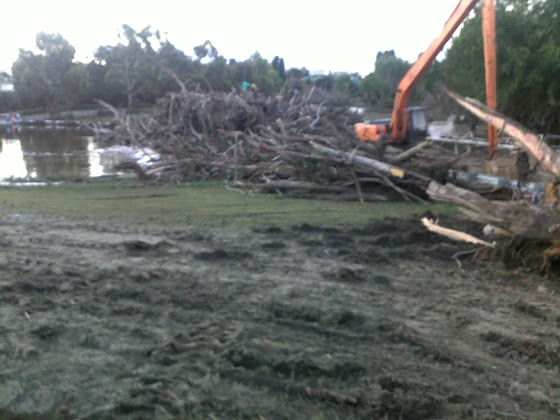 I took a couple of photos with my phone camera.

Notice the brightly coloured shirts of the 6 foot tall teenagers climbing across the wet, heaving mass.

UPDATE: This photo in from Devil ‘n’ Dizquiz: 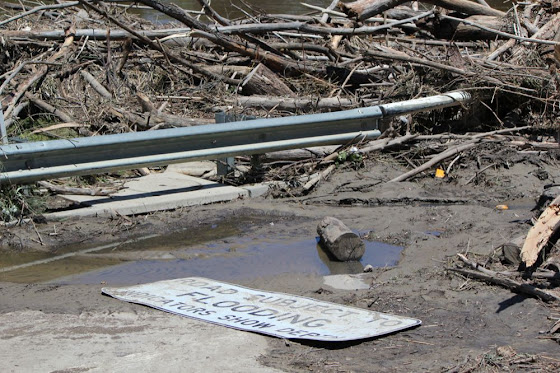 You know what happens when you fill a hole with water………………?

Georgesg: Qbn needs a by pass road and done so for ages.

troll-sniffer: If you don’t live in Qbn, don’t comment. The traffic is f***ed at the moment.

You don’t have to go through QBN to get to the coast. Drive out towards Goulburn and turn off to Bungendore.

All that wood in the middle of Bougainville, and yet not a single bogue has added petrol and matches? Next week on Amazing Stories …

The thing that surprised me with the traffic heading east into Queanbeyan is it seems to be there no matter what the time. I went in at about 5:30 yesterday (that is Sunday), and cars were still moving at a crawl, backed up over the bridge.

Another morning I was being dropped in at about 11:00am, we waited in stationary traffic on the Kings Highway for about 20 minutes before I hopped out and walked the rest of the way into the city.

I was a bit annoyed that going on a week after the floods, the roads are still closed, although after seeing those photos I can understand why.

Georgesg: Qbn needs a by pass road and done so for ages.

troll-sniffer: If you don’t live in Qbn, don’t comment. The traffic is f***ed at the moment.

Hmmm. What Queeanbeyan obviously needs is some authoritarianism.

Has to be a candidate for the most pointless cry-baby whinge of the week I think.

Much of the traffic being affected doesn’t want to go into Qbn, it wants to go around. But the back-up of Qbn main street traffic is clogging the intersections in the outer areas, such as the roundabout outside Spotlight and the Red Rooster.

Traffic has been backing up along the Kings Highway, it it is not moving because anarchy rules on the roundabout, and cars heading onto Monaro St are parked around it. I don’t know how long the line stretches in the morning, someone said Defence HQ JOC but I hope that was an exaggeration.

One solution would be to temporarily open the closed street next to the Rainbow Motel. They closed it for the new routing of the Kings Highway, there’s a fence across it. This would enable Kings Hwy traffic to avoid the log-jam altogether.

Another measure would be for a cop to hang on the Spotlight roundabout. People know it’s illegal to queue across an intersection and with a cop there, they’d stop doing it, and then at least traffic that needs to turn right and left (not straight ahead onto Monaro St) would be able to do so.

They know it’s happening, it’s not a one-off, and they are doing nothing. Last Friday (not just gone, a week ago) it took over 2 hours to go 2 kilometres, to get to that roundabout.

Meanwhile, if they offered for people to turn up with their trailers and chainsaws to get some nice firewood for winter, they might clear those logs a bit quicker.

What would you like the authorities to do? There’s no other roads to use.

Also, much of the wood is crappy half rotten stuff that wouldn’t be much good for firewood.

This is the bridge at Morisett/Atkinson St (near the old Marco Polo club), the closure of which is causing traffic to clog up Qbn every morning. Everything has to go along the main street, and traffic is backing up in all directions. Morning commuters trying to get through/around Qbn get to sit in lines of stationary traffic for hours (literally, hours).

Meanwhile, if they offered for people to turn up with their trailers and chainsaws to get some nice firewood for winter, they might clear those logs a bit quicker.

Roger Mungummary - 4 hours ago
Hell no, nobody needs another fast food Macca's flogging greasy unhealthy garbage food View
Johnathan Davis for Brindabella - 6 hours ago
I hear you Andrew. Jobs are important. I worked in retail and hospitality when I was a teenager and I know how valuable I fou... View
Robert Knight - Canberra Progressives for Murrumbidgee - 7 hours ago
The thing that sticks out for me is the value to the community the tavern appears to be provide - i.e. a place where people c... View
News 6