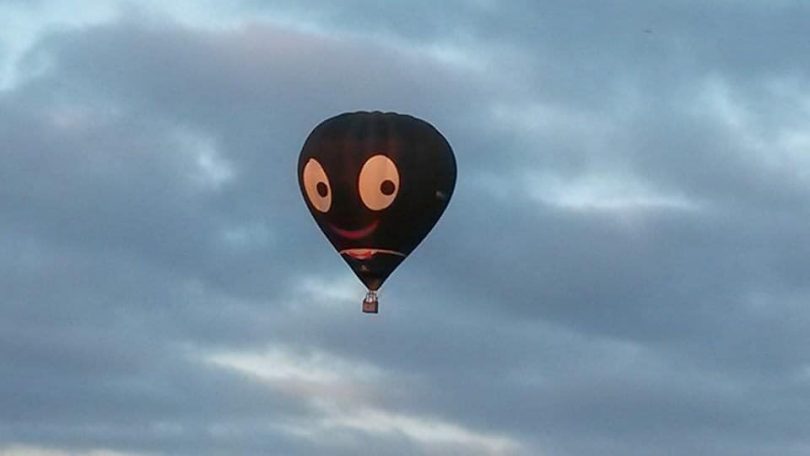 A ‘blackface’ balloon by the name of Golly has been banned from flying at the Canberra Balloon Spectacular 2019 in March because it may be considered racist.

Director of Events ACT, Jo Verden said the decision to reject the balloon application was made after a staff member raised concerns about its name, Black Magic Golly.

Events ACT runs the Enlighten Festival, which opens on 1 March, and is part of the ACT Government. The Balloon Spectacular runs from 9-17 March.

Ms Verden said the use of words and/or visual depictions that may be considered racist and offensive by many in the community, including Aboriginal and Torres Strait Islander Canberrans, was not supported.

“Progressing reconciliation between Aboriginal and Torres Strait Islander peoples and the broader Canberra community was a key priority for the Government,” she said.

Ms Verden said the balloon owner, Kay Turnbull, who had a long association with the Spectacular and had previously flown Golly during the event, had accepted an offer to fly another balloon.

“We are pleased to be able to welcome her ongoing participation in this popular annual event,” she said.

But a disappointed Ms Turnbull has told the Canberra Times that she wanted the Government to help pay for the cost of a new balloon ‘envelope’.

She said she had flown Golly for 20 years all over Australia without a single complaint and would continue to fly it in Canberra outside of ACT Government events.

She was unsure whether she would participate in next year’s Balloon Spectacular.

I’m absolutely appalled by the nasty ignorance about the history of racism that I see in Australia today – in 2019! Blackface in general and golliwog dolls are not random images. They are very specific historical symbols that have been used to perpetrate violence and oppression against black people all over the world – including in Australia. https://www.vox.com/2014/10/29/7089591/why-is-blackface-offensive-halloween-costume

I find it racist that if it were a cartoon white face it would be okay to be seen, but a cartoon black face is not allowed to be seen. There are black people too, so why can’t they be depicted. I find the organisers racists in their views that black people must be hidden. There are more than white people out there.

To make this point I would like someone to now fly an exact replica of this balloon, but now instead of black have white. I bet that won’t be banned.

And Skywhale is Cetacist (amongst other things) so it should be banned, too.

This is ridiculous. If it was green would it be considered insulting to the Irish, or to women if it was pink? I wear black all the time, should I be apologising. If the problem is the smiley face many people should be careful. Who was it called it Golly if it wasn’t the owner.?

Change the dialogue to black magic is being ‘representative’ and highlights the ‘plight of first nation peoples’, and they’ll not only demand your return, you will probably get paid to attend and receive ongoing funding to fly the balloon around Australia.

not sure if the name Golly is actually used or not, but it is clearly a Golliwog. You can see the bow tie and vest.

The owner herself calls it ‘Golly’ http://www.northamaeroclub.com/archives/pilots.php

It’s naive to ignore the obvious connection to golliwog dolls.

Hello Daniel, I’m not sure exactly where that web page you cite comes from but the ‘live’ Pilots web page that is reached via the 2015 World Balloon Championships web page on Northam Aero Club’s website ( http://www.northamaeroclub.com/pilots_2015.html ) shows the correct Australian aircraft registration and aircraft name, i.e. VH-KNJ and “Black Magic”. In the interests of accuracy I must point out that the aircraft registration shown on the URL you have cited is for a British balloon that was flown from 1976 to 2001. That balloon was in the shape of a golliwog doll and was sponsored by Robertson’s jam manufacturing company who had a golliwog as their mascot from 1910 to 2002.
Lastly, for what is is worth, I have been attending the Canberra Balloon Fiesta for many years both as a spectator and occasional crew member for other balloons and have never heard Black Magic referred to as Golly. I acknowledge that there is a connection to golliwog dolls, but I don’t see a golliwog doll in the sky when I see Black Magic. I see a friendly face, and surely we could all do with a bit more of that nowadays.

I think it is time the meaning of the word “racist” is changed.

Lucy Humphreys - 3 hours ago
Jennifer Manson then I'd say tennis is not for you View
Croissant Henderson - 6 hours ago
Love means nothing to tennis people. View
Jennifer Manson - 9 hours ago
Many people do not find it entertaining at all, but rather boring, so it's good to see some fun. View
Public Sector 2

Aditi Verma - 7 hours ago
This is the lunch place in Dickson with the amazing pasta I was telling you about Akshata Giri 😭 View
Clare Lee Gerhardt - 8 hours ago
What!! I love your coffees! View
News 24

Canberra Grammar has hit back at claims the school's acceptance of JobKeeper payments was the reason it recorded a significant...
Opinion 98