The Canberra Raider is a complex beast. It likes to blow early leads in games, and yet it often starts seasons poorly before finishing with a late finals charge.

Foxsports explains how Our Brave Lads have recorded another home win under SuperCoach Furner to see off the filthy cheating Roosters.

Canberra Raiders kept their NRL finals hopes alive with a 24-20 win over the Sydney Roosters in a spiteful clash in Canberra on Saturday.

Led by five-eighth Josh McCrone and man-of-the-match Josh Dugan, Canberra held on despite a late charge by the Roosters who had Anthony Minichiello sent off with six minutes remaining.

The victory put the Raiders equal on points with seventh-placed Brisbane and eight-placed Wests Tigers but in ninth on points difference. 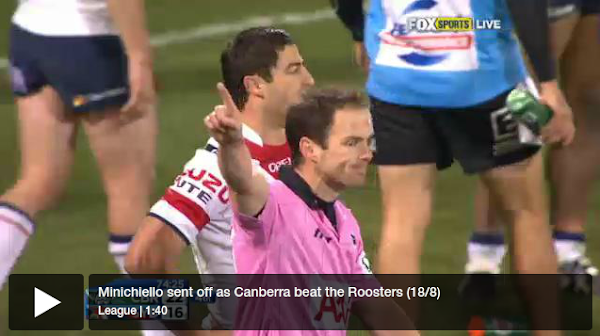 jwinston - 27 minutes ago
Yet again more meaningless legislation that less than 1% of the care about. Fix the hospitals and education before implementi... View
nobody - 1 hour ago
Colonisation turned this continent into the great country it is today. If colonisation had not taken place, then MLA Paterson... View
Opinion 15

gooterz - 37 minutes ago
I'm open to a pyramid league. View
Eddie Majcic - 53 minutes ago
Yes. We need the AIS precinct better utilised. Open it up more to the public get more people using it. It's a great facility... View
Heavs - 1 hour ago
I actually like what the Tasmanian Government just did. They partnered up with Hockey and bought a rolling bunch of events to... View
News 2

@the_riotact @The_RiotACT
Ratepayers and residents in 124 local government areas across #NSW go to the #polls on Saturday, 4 December. Here's a rundown on what you need to know https://t.co/cZ78vqVrLb (27 minutes ago)