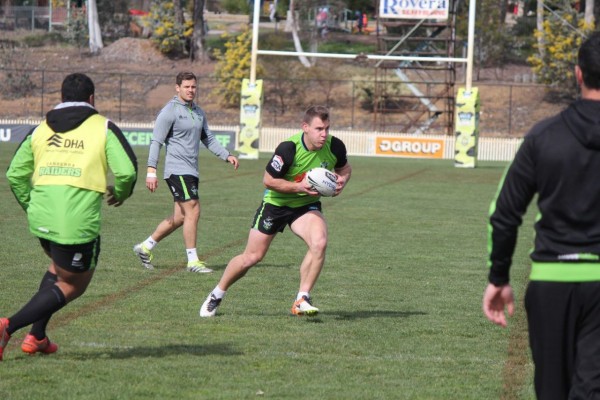 Should the Canberra Raiders have the chance to play for a home preliminary final at Bruce Stadium? You’d think given they’ve won nine out of their last ten matches they’ve more than earnt it, but the NRL has ruled it out.

Raiders fan Todd Burns is so keen to change the NRL’s mind on the issue, he’s set up a petition and found more than 1800 supporters to sign it. The petition is at Change.org here.

The NRL has ruled out a Raiders home preliminary final in Canberra on the basis that the stadium at Bruce cannot match Sydney grounds for capacity.

It has approved a possible home preliminary final for the North Queensland Cowboys in Townsville despite the ground there having a similar capacity to Canberra Stadium. This decision is based on the fact that Cowboys fans would need to travel much further and at greater cost if the game were held in Brisbane, compared to the three-hour car trip Raiders fans would be required to make for a Sydney prelim.

Canberra hasn’t made an NRL preliminary final since 1995, when they were defeated by the Bulldogs at the Sydney Football Stadium. That match was a Raiders home game.

The Raiders have won eight of ten of their home games at Canberra Stadium this year.

Mr Burns contacted the RiotACT asking us to alert our readers to his campaign to change the NRL’s decision.

“I have started a petition to help the Canberra Raiders have the home hosting rights to preliminary final,” he wrote.

“The petition has gained nearly 2,000 signatures and media attention from The Canberra Times, Prime7 and The Locker Room. I hope you can also help save sport in Canberra.”

“Let the NRL know it’s not all about Sydney or the money. Let’s get together and let the NRL know that the players and supporters have shown dedication and hard work all year to have the opportunity to host the preliminary final at home. Don’t let the NRL take all the games to Sydney.”

It links to the following letter to NRL CEO Todd Greenburg.

Dear Mr Greenberg
Thank you for taking the time to read the attached petition.
We, the fans of the Canberra Raiders and residents of the ACT and surrounding regions, would like you to reconsider the NRL’s stance on the Canberra Raiders hosting a home preliminary final at Canberra Stadium (also known as GIO Stadium), should they earn the right to do so.
We have been there through the blood, sweat and tears of not only the 2016 season but the whole history of the Club and feel that the team not only deserve it but the nation deserves it – Canberra is, as you will remember, the nation’s Capital and the ‘Bush Capital’ for so many rural residents of New South Wales.
Please take the time to reconsider, keeping in mind the advice that Melbourne, Townsville and Auckland are all touted as possible hosts of preliminary finals.
Sincerely,
Todd Burns
On behalf of
Canberra Raiders Fans
#HistoryHappens #BleedGreen #WeAreRaiders

The Raiders play the Melbourne Storm at Canberra Stadium this Monday at 7pm.\

so which game is this for? don’t the raiders have to win the first finals game before gratned their ‘home’ (in sydney) game?

Signed. I’m guessing after last nights performance the petition will get a bit of a kick along today!

@The_RiotACT @The_RiotACT
An array of local and all-star Australian acts will feature at picnic-style entertainment hubs to help Canberra celebrate on Australia Day https://t.co/My7xFBeqRF (6 hours ago)

@The_RiotACT @The_RiotACT
A COVID-19 vaccine program in Australia could roll out as early as next month, but can employees legally refuse to receive it? https://t.co/MCQkZR0IDR (9 hours ago)