Raiders manage a win over the Cowboys 26 to 18

After a bit of a dry spell on the road the Canberra Raiders have managed a home win against the North Queensland Cowboys.

Despite going wobbly in the second half.

More on this later.

Three first-half tries gave the Raiders a handy lead and they clung on for a crucial victory at Canberra Stadium that also snapped a five-game losing streak against the Cowboys.

Things just didn’t click for Johnathan Thurston and the Cowboys in the first 40 minutes. 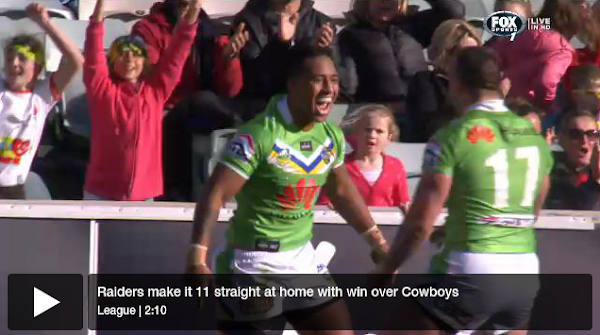 Paul Mathews - 47 minutes ago
my neighbour cuddles up with his BARKING DOG, eh Chris View
Shane Jasprizza - 12 hours ago
Been on for about a month already 🤷‍♂️ View
Kelly Hartas - 15 hours ago
Hell yes View
Lifestyle 4

Rachel Spangaro Morris - 1 hour ago
Ashley McBride the bodysuit extenders? Yep they’re amazing we used with Aldo! Allowed us to skip every second size of bodys... View
Ashley McBride - 1 hour ago
Rachel that ‘snappy’ is an amazing idea!! View
Jackie White - 15 hours ago
Jane Kim messy yeah! Scary, nope. Crazy how such a basic necessity has changed in a few decades isn’t it!... View
News 28

The major shareholder of Public Bar in Manuka and the founder of Canberra's largest accounting firm, Walter Turnbull, has taken...
News 35

Next two games ‘make or break’ for Raiders’ season

@The_RiotACT @The_RiotACT
House records continue to tumble across the ACT. Check out the house that set a new record for Conder and Tuggeranong https://t.co/z8QlJdIB6a (41 minutes ago)