Raiders muddle to defeat against the Roosters. 14-8

Foxsports reports that life is not getting any better for the Raiders.

Sydney Roosters edged past an injury-decimated Canberra 14-8 in a woeful NRL encounter littered with mistakes at Allianz Stadium on Sunday.

Brian Smith’s side outlasted a Raiders side who played the whole of the second half with 14 available players after injuries to star fullback Josh Dugan, workaholic back-rower Shaun Fensom and utility forward Trevor Thurling. 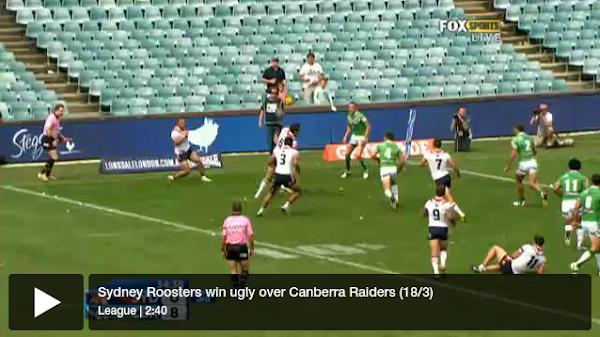 3 Responses to Raiders muddle to defeat against the Roosters. 14-8
Filter
Showing only Website comments

Ah, but I hear Don Furner is going to call up a Massey for the next match…that should give the opposition something to worry about!

I like the whole TWO fans in that shot.

One of the most dire games of league I have seen in some time, and the staggering error rate wasn’t the worst part. Canberra’s total lack of direction in attack is utterly tiresome. Every game is like groundhog day – dummy half pass, hit up, rinse and repeat to tackle 5 and then kick. I don’t think I saw a single play where they attacked the Roosters line. The Raiders need an inspired halves combination if they are ever any hope of making the grade, especially considering every player on the team is made of fine china.

Oh, and Mitch Aubesson is a grub. His hit on Dugan was a real low point.

Pari Gilmour - 42 minutes ago
I support a burnout pad. Zero interest myself but obviously these guys need a social space to do their thing. Happy to suppor... View
Property 13

Kir Rin - 12 hours ago
WHS Act is able to trump Discrimination law in certain circumstances. So presumably it’s possible. View
HiddenDragon - 1 day ago
A very interesting related legal question will be businesses which promote themselves as "safe" because their staff have been... View
News 16

@The_RiotACT @The_RiotACT
Book a seat for Kambri Film Fest 2021, a free festival that celebrates and elevates the contributions of creative women in the film industry https://t.co/5oivpfnWaq (38 minutes ago)