Raiders rumble over the Panthers 24 to 12

Foxsports has the happy news of another Raiders home win, this time over the Penrith Panthers:

Canberra fullback Reece Robinson starred in his side’s 24-12 NRL win over Penrith on Saturday, while his twin brother Travis had a night to forget.

Reece earned man-of-the-match with a try and several desperate runs out of his in-goal, while Travis was taken off by Penrith coach Ivan Cleary midway through the first half after two bombs to his wing led to the Raiders’ opening two tries.

“He (Travis) was a bit unlucky out there, a few bad little things,” Reece said.

“He’s just got to be a bit more confident I think.”

The dominant display in front of a crowd of 9,176 was the Raiders’ 10th straight win at Canberra Stadium. 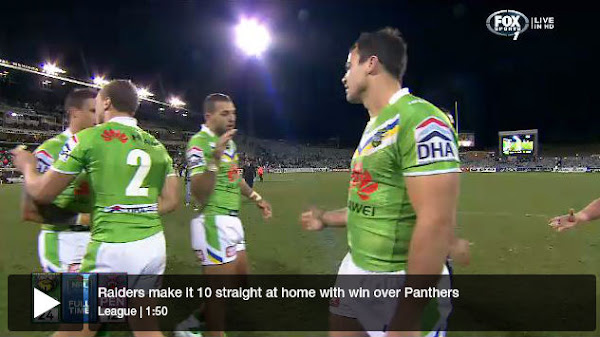 I took the 4 yr old son to the footy on Saturday night and he had a great time (we are manly supporters) but will cheer for the raiders being resident here).

The lad had a card, being a junior league player, but I thought the $38 charge for me was a bit steep. We took or own food and drink because all they serve up there is overpriced crap. Maybe they would see better crowds if they dropped the price by $10 and get another 5 000 through the gates.

It seems that most Canberrans only support one football team at a time. The Raiders crowds will increase once the Super 15 wraps up.

I thought it was a pretty lackluster second half by the Raiders. I reckon they could have put at least another 12-18 points on them. Considering the only thing separating them from 5th spot is points differential, I would have thought improving their for and against would be a priority.

The team gets better, the crowds get worse.

Under 10k is a terrible indictment on their fans, but moreso on the stadium. Something is clearly wrong here – it’s just a shame that the NRL don’t give enough of a shit about Canberra to even look into it.

Life seems to be becoming very expensive in the ACT. I’m not surprised that going to the footy is low on people’s priorities, especially in winter.

why go to the game when you can watch it on fox. We don’t have fox, so we go to the game but it was freezing cold, there is nothing for the kids to do on the eastern side (had to go all the way around for a lame colouring competition) and the food prices are ridiculous, limited in choice and poor quality.

I’m sure it will pick up towards the end of the season, especially if we keep winning.

The team gets better, the crowds get worse.

Under 10k is a terrible indictment on their fans, but moreso on the stadium. Something is clearly wrong here – it’s just a shame that the NRL don’t give enough of a shit about Canberra to even look into it.

Leigh Scarsi - 4 minutes ago
Peter McDonald no the stables will be knocked down and put in the middle units/high rise will go where the stables are im gue... View
Katy Did - 2 hours ago
Cheryl Carthy It is right on the light rail line so they need to have the rail patronised View
Katy Did - 2 hours ago
Absolutely-just like the golf courses. How dare you put a golf ball through my window! Or those people who build under a prop... View
News 16

Aaron Still - 2 hours ago
Nice one Con and Tony !! You guys are awesome. Wish the body still worked well enough to play there 😬😎... View
Opinion 3

Capital Retro - 4 hours ago
You are aware that Bungendore is in NSW? View
Lou Phillips-Critchley - 6 hours ago
If it has to change, what about Australian citizenship day on 17 September each year. The day is intended for Australian citi... View
Rowan Hartcher - 21 hours ago
Alan Hopkins like wise View
News 10

A Belconnen GP surgery was forced into lockdown yesterday (21 January) over concerns that a patient had recently been to...
Opinion 188

UPDATED 2:40 pm: The ACT will remove travel restrictions on all of Sydney apart from the Cumberland local government area,...
*Results are based on activity within last 7 days

Al Manoosh, the newly opened Lebanese bakery in Mawson, is serving up breakfast with not a smash of avocado in...
Community 29

@The_RiotACT @The_RiotACT
Reports to authorities about suspected child abuse and neglect fell in the ACT during COVID-19 lockdowns between March and September 2020 https://t.co/Y37TdNbcQf (52 minutes ago)

@The_RiotACT @The_RiotACT
A torrential storm saw seven people die in Woden 50 years ago on Australia Day 1971. A police officer on duty that night recalls the events that still gives him goosebumps https://t.co/4jgf3xFKhq (2 hours ago)

@The_RiotACT @The_RiotACT
A revamped Thoroughbred Park could be home to 3200 units and a commercial precinct. A three-month public consultation begins in February https://t.co/INaevC0Xor (5 hours ago)