Foxsports brings word of some much needed sunshine for the Canberra Raiders giving a spanking to the Wests Tigers:

The Raiders chalked up a comfortable 30-16 victory, their first win in eight against the joint venture, thanks to two tries from Jarrod Croker and four-pointers from Josh McCrone, Sam Mataora and skipper Terry Campese. 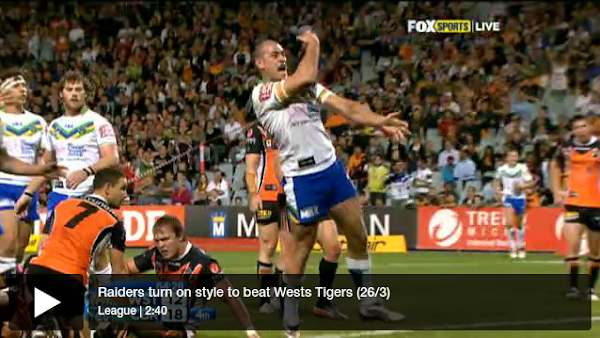 Campo and Croker are half man half amazing demigods.

So you could say they’re… hemidemigods?

In the fullness of time, yes.

Campo and Croker are half man half amazing demigods.

So you could say they’re… hemidemigods?

Amazing. I felt like I was watching a completely different team to the one that capitulated to the Roosters last weekend.

I think last week was simply due to only having 15 fit blokes, with the key attack weapon missing for more than half of the game. How good did Reece Robinson look last night with a full week training at fullback?

It just proves the importance of remaining injury free.

Camp was man of the match in his 100th first grade game. Awesome effort.

all raiders fans, please thank me….whenever I watch a raiders game..they lose…I chose not to watch last night, they won…i will never watch a game this year…they will win the comp

Amazing. I felt like I was watching a completely different team to the one that capitulated to the Roosters last weekend.

A great night was had by all at Ainslie Football Club watching this. What a game. Campo and Croker are half man half amazing demigods.

Cows on Monday at Bruce, who’s in?!

Trish Roberts - 3 minutes ago
Yes. Does not want to hear the opinion of older people. Well, one day, if he’s lucky enough, he’ll get old, too!... View
Business 4

@The_RiotACT @The_RiotACT
“Witness J” speaks to Genevieve Jacobs about being incarcerated with Canberra’s sex offenders, his anger and his fears about our nation’s growing secrecy https://t.co/0X7XNZbVN4 (56 minutes ago)