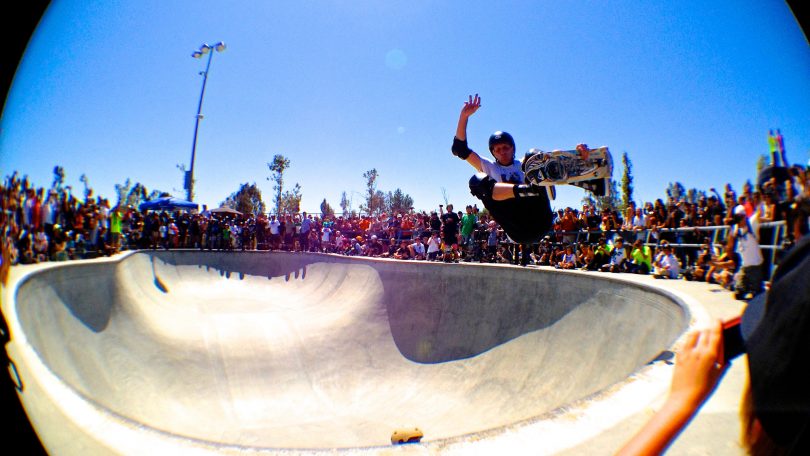 Tony Hawk (seen here, not at Woden) has been a force in skateboarding for over three decades. Photo: Flickr, Victor Solanoy.

Never-before-seen video of US professional skateboarder Tony Hawk at Woden Skate Park in 1988 has been discovered and shared online.

The footage, posted by Hawk on his Instagram page, shows him performing a range of tricks on the halfpipe in front of a huge, captivated crowd of Canberrans.

An internationally renowned skater and entrepreneur, the now 53-year-old Hawk turned pro at just 14. In 1999, he was the first person to successfully pull off a 900-degree aerial spin.

The Canberra appearance, part of the 1988 Bones Brigade Tour, was a significant win for local skaters and drew international coverage.

“I saw this footage today for the first time ever thanks to [Mark Weatherstone] and I barely remember any of it,” he wrote on the post.

“Here are some highlights of my odd trick selection: fast plant varial, invert varial to fakie, a sloppy Christ Air, egg to fakie, frigid Madonna and the most desperate 720 I’ve ever seen.”

The video has been watched over 220,000 times at the time of publishing.

The man behind the video, Mark Weatherstone, responded to the post saying how much Hawk’s visit meant to locals.

“Glad to jog your memory [Tony Hawk],” he wrote. “It’s a day us Canberran skaters will never forget … in fact, we still talk about it.”

Were you there when Tony Hawk skated in Canberra? Let us know in the comments.

omg this is awesome

I was there too. I think it was in November on a Melbourne Cup day

Belle Gordon we were there. Will never forget that day

Matt Wood were you too young to be there?

Nick Miller I definitely wasn’t there that day which is a real bummer but being 9 I’d say it might have been a year before I was allowed to go there. I tried to drop into that half pipe once and crashed hard.

I was there mate. Even managed to get a poster signed by the entire bones brigade. If only I still had it. God knows what happened to it

Tom Cummins watch the 720 at the end

He skated at Erindale Brick Banks too

Ilsa Maree here’s one for Jett

Lee Boswell were you there??

I was their that day

Pay Powell indeed I was. Was very fortunate to spend the whole day with them, skating and touring in their van and had dinner with the guys too. Was probably my favourite day ever as a kid!

John Etminan so you were up on the ramp skating too?

Pay Powell Yup. Hard to see me but I am the tiny guy with a red helmet on the right hand platform

John Etminan there goes my hero!!

Pay Powell here is a photo where you can see me

Iain Huntley you were there from memory, I drove past with my Mum? 🤘🏻

I wasn't there that day. I wasn't allowed to go. 😭

Iain Huntley Tragic, do you remember why not?

I was considered too young to go on such a trip by myself.

Matty Phillips Lee Cannon were you there?

Marty Livingstone don’t think so. I was there when Lee left some of his face in the bowl though!

Matty Phillips hazardous sport. How about half his shin on the wall at Weston Creek High?!

Marty Livingstone no I wasn’t

Adam Brzozowski yeah man, I was actually allowed to have the day off by my olds 👍

purplevh - 4 hours ago
When there is an event on at Wakefield Park what does it do for the motels and other hospitality businesses in and around Gou... View
Don Rail - 8 hours ago
What about half between Yass and Canberra? View
bikhet - 10 hours ago
In WokeWorld? Dream on. View
News 2