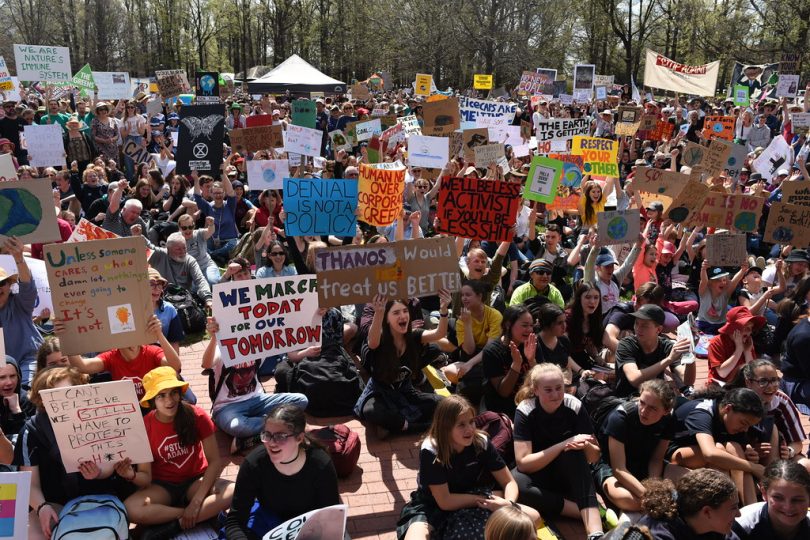 Up to 15,000 people turned out for Canberra’s Climate Strike on 20 September. Photo: Stephen Smith (supplied by School Strike 4 Climate).

Climate change took centre stage in Canberra last week. Monday saw the release of the next ACT Climate Action Strategy 2019-2025 and Friday saw thousands of students, their parents, grandparents and others walk out of school and work to call on our federal politicians to take more action on climate change.

The strategy maps out the next steps for Canberra to reach its goal of net-zero emissions by 2045.

The ACT’s ambitious emission reduction goals have been reviewed regularly and were last revised in 2018 on the advice of the ACT Climate Council.

The ACT has been a world leader in implementing the previous Strategy to meet interim targets, particularly in transitioning our electricity to 100 per cent renewable sources. The new strategy notes that while great progress has been made, we need to ramp up our efforts to meet our 2045 zero emissions target.

The strategy clearly outlines that this action will need to be shared between government, business and households to reduce carbon emissions.

The emphasis is now shifting to the sectors producing the bulk of our carbon emissions now that we have eliminated electricity-based emissions. The biggest of these are emissions from gas (which is projected to be 62 per cent of our emissions by 2019/2020) and transport (22 per cent).

That means households need to look at doing things differently in the future, like switching from gas to electricity, buying an electric vehicle once more affordable models start hitting the market and supporting initiatives like car-free days.

Some critics suggest that the ACT has already done enough and it’s not fair to expect households to take action at an individual and household level. However, the support of the climate strike suggests that many households are highly motivated and want to do more themselves, as well as expecting their government to do more.

Transitioning from gas won’t occur immediately but is suggested as part of a longer-term strategy. Removing the mandate to roll out gas infrastructure in new suburbs will make a difference. For many households, a switch to becoming fully electric will save money. Many households should ask why they are paying two supply fees for a dual-energy house or why they are using gas while the house is generating solar energy.

When support is provided to move to more efficient applicants, potential savings will make an even bigger difference for lower-income households struggling with living costs.

It’s not surprising that some of the proposals around transport have received a lot of attention.

Some people have expressed concerns about the idea of ‘car-free days’, suggesting it is impractical and discounts many people’s travel habits.

However, a quick investigation of car-free days reveals a growing movement that accommodates people’s working arrangements (for example, London closed the city to cars last Sunday). That’s why car-free days are usually limited to central areas of cities on weekends, and tend to coincide with festivals and outdoor activities that enable citizens to reclaim areas of the city usually devoted to car travel. It also happens already in the ACT during the Multicultural and Enlighten festivals, both of which incorporate car-free zones.

It’s also important to remember that this is just one idea in a long list of transport initiatives.

There is no doubt that there are lots of challenges around transport emissions. The market is not yet delivering a wide range of affordable electric vehicles and commentary on the recent changes to the public transport system suggest that we still have work to do to make it easier to give up our cars and adopt active transport options. This is one area of the strategy where there will be considerable work to do.

The strategy talks about a “just transition”, which recognises that the move to a carbon-free economy needs to be carefully managed so that the costs do not disproportionally fall on the shoulders of those least able to afford it. This is vitally important as we increasingly realise that climate change is not just an environmental issue but a social issue, too.

Tell us what your household’s doing to reduce carbon emissions in the comment section below.

Rebecca Vassarotti is an active member of the ACT Greens and was Greens candidate in the last Territory election.

Ric Hingee - 42 minutes ago
I like the old station, but not the trains that service it. View
Hvcvlt Lukey - 1 hour ago
It needs to stay there for history reasons but Def's needs something done to it lol View
Capital Retro - 2 hours ago
I don't think Murrays Buses are "public transport", Leon and the only modes are buses and trams, the latter goes only in one... View
Opinion 14

Andrew Wadey - 2 hours ago
Same thing in so many sports, like A-League who keep stringing supporters along and then find some justification to do whatev... View
Martin McMaster - 2 hours ago
Who needs to start winning? View
Neil Chandler - 3 hours ago
Peter Bee true, but they produce some great players and there is a fanatical enough fan base that it would be a worthwhile ve... View
Opinion 7

Brisal - 2 hours ago
"If you want to maintain that sense of community, less worrying about what other people might be doing is probably a good pla... View
Futureproof - 3 hours ago
Ditch Facebook and you will be much happier. Facebook is a morale vampire... View
Sam Oak - 3 hours ago
The majority of Canberrans either have moved from interstate or have links such as family in other states. It already became... View
Property 2

Ian Jessup - 2 hours ago
Maureen Ryan yeah it is. Both Q and WW punch well above their weight in sport View
News 27

Capital Retro - 3 hours ago
......"do they look like they are getting married." Anything is possible now, in Canberra.... View
Cheryl Boyd - 3 hours ago
Kangaroos will go into water if they have been bitten by a snake. Hope it was taken to a vet to get checked over. View
Property 15

Mikey Moore - 3 hours ago
I would be more than happy to have something like this in my area. Unfortunately, the NIMBYs at WVCC oppose anything over 2 s... View
News 16

Sam Oak - 3 hours ago
It’s not my business nor anyone else’s what my relatives were doing in Sydney last week. There are hundreds travelling in... View
News 34

Carol Treneski - 3 hours ago
The team at the gym and pool worked with my Dad for years. He had Parkinson’s and Lewy Body Dementia. They helped Dad retai... View
News 1

Spiral - 3 hours ago
I wish he would go, but yet again this seems to be most likely RIOTACT political gaming in trying push change by claiming the... View
Opinion 197

David John Hourigan - 5 hours ago
John Slow too many round abouts...! View
show more show less
*Results are based on activity within last 7 days

Speculation around a potential return to Canberra of the Supercars, operating in a circuit around Exhibition Park, has raised the...
News 125

@The_RiotACT @The_RiotACT
The ACT has recorded 16 new cases of COVID-19 to 8 pm last night. None of today’s cases were in quarantine for the entirety of their infectious period https://t.co/hcprtCpwfX (17 minutes ago)

@The_RiotACT @The_RiotACT
The COVID-19 pandemic won't kill the #office environment, but it has forced many significant changes that are here to stay, meaning #CBD offices will have to evolve for the new normal. See what's coming https://t.co/b0KU5sIoXm (1 hour ago)

@The_RiotACT @The_RiotACT
A Kambah pizza bar has been identified as a close contact #exposure site in the latest list from @ACTHealth, while supermarkets across the ACT are named as #casual or monitor for symptoms sites https://t.co/LKRHn7xAFZ (2 hours ago)