Katy Gallagher has lead the pack with a response to the passing of Canberra businessman and philanthropist Jim Murphy.

“As one of the capital’s leading citizens, Jim’s contribution to the ACT was immense. He touched the lives of many Canberrans through his strong and passionate involvement in local industry, charities, sport, and the church.”

“Jim’s generosity knew no bounds, and the contribution he made to numerous local charities over many years was enormous. His tireless work with Open Family Australia, helping young homeless people in Canberra and Queanbeyan is worthy of particular praise,” Ms Gallagher said.

Jim’s reputation and connections with the wine industry, both nationally and overseas, helped put the local wine industry on the map. He played an important role in brokering the arrangements that saw BRL Hardy establish its Kamberra complex in Canberra, providing jobs for the region and a valuable showcase for local product. He was a foundation Committee member for the National Riesling Challenge, an event that has achieved international recognition within the industry.

For over three decades Jim was one of Canberra’s most recognisable and successful businessmen, and his promotion and support for local business was well known. As an Honorary Ambassador for the ACT, Jim travelled the world selling the benefits of the national capital. He led a number of successful trade missions to China and Japan, and also helped to facilitate Canberra’s sister city relationship with Beijing.

During his five years as voluntary Chairperson of CanTrade, he regularly devoted time to bringing business to the ACT and the region. He oversaw a project that led to the creation of 1,000 jobs for unemployed youth and also established the Canberra Business Promotion Centre at Regatta Point.

“His passionate belief in the ACT’s business potential, and the need to pursue emerging business opportunities, certainly helped contribute to the economic growth of the ACT,” Ms Gallagher said.

Jim was also a strong supporter of the local church and made generous contributions to the Australian Catholic University and, as a board member, the Calvary Hospital. He was also a diehard Raiders fan and joined the Canberra Raiders board at the invitation of chairman and close friend John McIntyre in 2003.

Jim was appointed a Member of the Order of Australia (AM) in the 2003 Australia Day Honours List for his contribution to the Australian wine industry and to the ACT community.

“Over coming months, the ACT Government will consider how best to recognise and remember Jim’s legacy to Canberra and the surrounding district. We feel it is fitting that his contribution to the local community not be forgotten,” Ms Gallagher concluded.

The Liberals still can’t work their website but emailed in a joint statement from Zed Seselja and Brendan Smyth:

“I have known Jim professionally and personally for many years,” Zed said. “I was profoundly saddened to hear the news of Jim’s death and the Canberra Liberals thoughts and prayers are with his family during this time.

“Jim was generous by nature and contributed to many causes over the years,” Zed said. “He was a man that had a hand in so many elements of the Canberra community, whether that was the Liberal party, the Raiders, many charitable organisations, or his work within the business community.

“He seldom ever turned down calls for support for needy causes; I have seen so many times his generosity, many examples of personal and financial support that was never publicised. I believe this generosity is what he will be best remembered for,” Zed said.

Deputy Leader Brendan Smyth paid tribute to Jim’s major contribution to the business community and Liberal party in the ACT.

“Jim has been a pivotal contributor over the years to the Liberal party here in Canberra,” Mr Smyth said. “His strong support for the business community and the growth of industries, particularly the wine industry in the surrounding ACT region, will be long remembered.

“Jim understood how important a strong business industry was to the ACT. He was one of the industry’s strongest supporters, even when economic conditions were tough.

“Most of all, Jim was a strong family man. Our thoughts go to his wife Margaret and his two sons. He will be sorely missed,” Mr Smyth concluded.

The Canberra Raiders have saluted their departed board member:

The Raiders were informed of Mr Murphy’s passing late yesterday evening before their Charity dinner for the ACT Eden-Monaro Cancer Support Group, with Chairman John McIntyre paying tribute to him before and after the event.

Mr McIntyre said Jim Murphy would be sadly missed not only by the Raiders, but also by the wider Canberra Community, including the Open Family Australia Charity – an Organisation aimed at helping children who live on the street.

“He’s probably one of the most generous people you will ever meet in life, not just through a monetary sense but through the intellectual sense,” Mr McIntyre said. “Most people in Canberra don’t realise how many street kids there are in Canberra and Queanbeyan, and Jim Murphy over the last decade or more put substantial physical effort into helping with that charity.”

Mr Murphy was also well known in a business capacity in Canberra through his Airport and Market Cellars and was an iconic figure in the Canberra landscape. He is survived by his wife Margaret and their two sons Adrian and Damian.

In the ultimate accolade of the times on Twitter Jim Murphy is trending nationally (thanks to Beserk Keyboard Warrior for noticing): 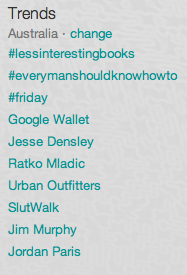 Nick Savino - 31 minutes ago
I prefer making coffee at home don’t see the point of cafes everyday View
Nick Savino - 33 minutes ago
Stephen Page-Murray correct the food is rubbish I complained so many times that the food manager and his 2 mates came to my r... View
Amy Nelson - 1 hour ago
Sashika Mendis we loved living there. Now living in Melbourne, a “most liveable city”, we question why more people don’... View
News 5

Marc Edwards - 14 hours ago
Maybe the Berra Party View
Paul Leins - 14 hours ago
Sure, just bet a former liberal will be a real check to his mates in the liberal party 🙄 View
Michael Ilsley - 14 hours ago
Glad to see him engaged in the community after the tragic loss of his son. View
What's On 1

Whether you’re catering the next big family BBQ or preparing for a Sunday roast, any good home cook will know...
Opinion 69

Join Col McIntyre for Quality fun on the fairway at Federal

“Morally I’m right, legally I got pinged”: the case of Jerra Jim versus the council

@The_RiotACT @The_RiotACT
A Mini Cooper drove through the shopfront at KFC Hawker last night. Remarkably, no one was injured https://t.co/5sfUWXD1q0 (45 minutes ago)

@The_RiotACT @The_RiotACT
A 26-year-old from Denman Prospect blew a kiss to a supporter via video link as he was granted bail after being accused of operating in the high end of the drug distribution network https://t.co/6Ihdl3o677 (2 hours ago)