Canberrans who had electrical work done in their homes between 2010 and 2013 should heed safety messages following a recall by the Australian Competition and Consumer Commission of electrical cable known as ‘Infinity’ cable, Attorney-General, Simon Corbell, said today.

“The cable was sold in the ACT between 2011 and 2013, however it may have been available in Canberra from 2010 to 2013 as suppliers were able to purchase it in New South Wales,” Mr Corbell said.

“The ACCC has advised there is no immediate danger, however stressed consumers should not attempt to inspect any electrical cables themselves and should engage a licensed electrical contractor to do so.”

The Infinity cable has been recalled after failing electrical safety standards, due to poor quality plastic insulation coating. Tests have found that the cable will degrade prematurely and if disturbed, could break and expose live conductors. This could potentially cause electric shocks or fires.

The recall applies to all sizes and configurations of Thermoplastic-sheathed cable (TPS) and Orange Round mains power cables sourced from Infinity Cable Co Pty Ltd and marked and supplied under ‘INFINITY’ and ‘OLSENT’ brands.

“While there is no cause for immediate concern in relation to Infinity cable, it is best in these circumstances to be safe and avoid potential issues in future. I urge property owners not to get into roof spaces or under floors themselves to check for the presence of Infinity cables; use the services of a qualified electrical contractor.” Mr Corbell said.

“Households and businesses that have had electrical wiring work carried out between 2010 and 2013 should contact the responsible builder, electrical contractor or appliance installer to confirm whether Infinity cable was used.”

The cable supplier should arrange for an inspection of the wiring and remediation of any installed Infinity cable that they supplied, free of charge to the consumer. Any affected cable installed in accessible areas or near heat sources must be removed and replaced or sleeved in an appropriate conduit under the safety recall, the ACCC has advised. An appropriate residual current device should also be fitted to remaining cabling in inaccessible areas.

“Cables will age at different rates, depending on the ambient temperature and the load placed on them. The current expert advice we have received is that this cable may become brittle from 2016 onwards, and suppliers have been asked to assess and work on the oldest or highest risk installations first,” Mr Corbell said.

For those who are uncertain whether Infinity cable was installed, the installer or their supplier should be given the first opportunity to arrange an inspection of the wiring.

“If you are uncertain who installed the electrical wiring, you can arrange for a licensed electrical contractor to inspect your wiring. However, inspection costs are not recoverable from cable suppliers if Infinity cable was not installed or if the cable installer and supplier cannot be determined,” Mr Corbell said.

Any unused or removed Infinity cable may be returned to the cable supplier for a full refund or replacement.

The ACCC has advised that the consumer guarantees of the Australian Consumer Law may apply to protect those who have had Infinity cable installed, depending on the circumstances.

“I strongly encourage property owners who may be affected to contact the responsible builder, electrical contractor or appliance installer to check the work they have done.” Mr Corbell said.

The recall notice for the national recalls is available at www.recalls.gov.au 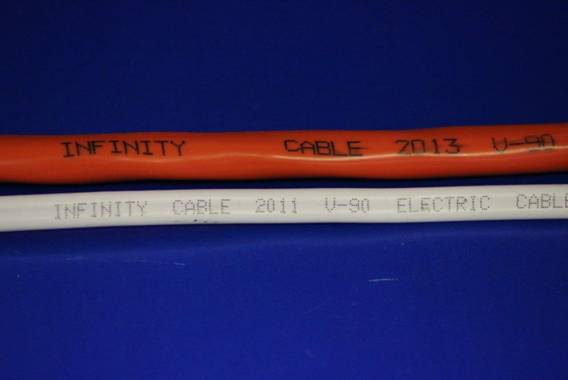 None. All their cable was special high-standard Chinese cable.

Hey, this cable has lumps in it!
I love your sense of humour HBG.

None. All their cable was special high-standard Chinese cable.

This problem might be more widespread than first thought. I bought an audio cable off eBay from China for $4.95, an equivalent cable in Dick Smith costs $29.95. It is not stretching the imagination to suggest builders and developers would also be getting cheap supplies of cable from China rather than paying more for local suppliers.

Ian Gooch - 2 minutes ago
What a waste of our money....... I can think of a few things that need 14 Million bucks before trees FFS! View
Duane Brinkmeyer - 2 minutes ago
Could have been 108,000 trees if it wasn't for the $14M sculpture of a snake eating itself! View
Carol McEwan - 14 minutes ago
The tax payer , pays for everything View
Food & Wine 8

David Jenkins - 29 minutes ago
John Moulis Except that he was born in the US where such things are still allowed, so the irony is possibly non-existent 🤷... View
Chamika Fonseka - 31 minutes ago
Kethmi Gamage the irony View
Fred Pilcher - 2 hours ago
A classic Australian wowser. View
Lifestyle 3

Capital Retro - 2 hours ago
The first thing you learn when living in the bush is never leave an entrance door to the house or shed open and close all gap... View
News 175

Jeremy Scerri - 2 hours ago
Lela Bodo "heart of belconnen" View
Lela Bodo - 3 hours ago
That lake is now famous 😂 Jeremy Scerri View
Rommel Gausman - 4 hours ago
Azolla. It's a water fern. We tend to clean it oout of our dams as it'll choke out all the other plants. Worst case, it overg... View
Property 12

pamelahcollett - 4 hours ago
This large commercial development is ADJACENT to Callum Brae Nature Reserve and will seriously impact the reserve. Please go... View
pamelahcollett - 4 hours ago
Callum Brae Nature Reserve will be overwhelmed by this proposed huge development next to it. Please submit a submission again... View
Lifestyle 6

Kerry Graf - 4 hours ago
Maybe it needs to look more like a hollow, and less like a box. View
show more show less
*Results are based on activity within last 7 days

Speculation around a potential return to Canberra of the Supercars, operating in a circuit around Exhibition Park, has raised the...
News 175

Canberra needs a new multi-modal public transport hub with connections to the Parliamentary Zone and the city and beyond to...
News 158

The ACT Government will spend $14 million to plant tens of thousands of new trees across Canberra by 2024. The...
News 129

Heater fault prompts warning to get your motorhome in order

Two superb homes on an ideal acreage awaits you at Mogo

@The_RiotACT @The_RiotACT
The flowers are blooming at @TulipTopGardens right now and owners Bill and Pat Rhodin are making sure visitors don't miss out on the beauty by posting photos online. See some of them here https://t.co/GWEoYH5lmu (1 hour ago)

@The_RiotACT @The_RiotACT
The ACT has 25 new cases of COVID-19. Ten people are in hospital with COVID, four are in ICU and three require ventilation. The ACT has now passed 85 per cent of first doses for people aged 12 and over https://t.co/nWLOZrtF6W (1 hour ago)

@The_RiotACT @The_RiotACT
A Canberra mum and lawyer who was recently diagnosed with an eating disorder knows firsthand that the system is under stress, and more #support is required. Now, Dr @marisa_paterson MLA is sponsoring a #petition for increased support services https://t.co/Bqnf9eIhlI (2 hours ago)